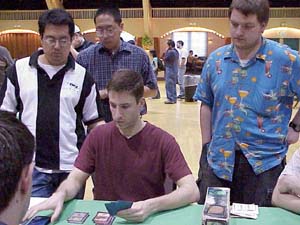 Sol MalkaRound twelve saw the pairing of Sol Malka, The People's Champion, against a Minnesota player who was celebrating his twenty second birthday. Noah Weil looked to keep his special day just that, and took on one of the tour's most popular players. Sol was playing a three color special. Black, red and Blue to be exact. Shower of Coals, Flame Burst, and Ghastly Demise looked to clear a path for ground pounders like Pardic Lancer, Faceless Butcher, and Petravark. Soul Scourge could take to the skies, and Diabolic Tutor could give him the answer he needed. Noah was also with a three color deck. Black blue green, which used Skywing Aven to beat in the air. Diligent Farmhand and Rites of Spring smooth out his tricky mana base, and Ambassador Laquatus is one of the main win conditions for his deck.

Sol won the die roll, and opted to draw first. Both players kept their opening hand and it was Weil who broke the ice. Aquamoeba came down on turn two for Weil and he raced off. Skywing Aven joins Noah's force, and before the damage can really begin, Crippling Fatigue forced the Aven back to the hand of Weil. Petravark came crashing down and removed the lone island of Noah's. Mana screwed, Noah was forced to discard Ambassador Laquatus and Krosan Restorer to bring more lands out. A Repel from Noah bounced a Pardic Lancer, but he could do nothing about it coming back into play. Noah played out some chump blockers, but could draw nothing to deal with the threats were on Sol's board. 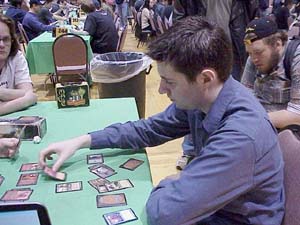 Noah WeilNoah decided that he wanted to draw first the second game, and forced Malka to play. Both keep their opening hands, and Noah starts off this game with a third turn Skywing Aven. Patchwork Gnomes were played by Sol and it looked like it was going to be a foot race as Shadowmage Infiltrator entered the play area. Malka took a hit from the Jonny Magic and the Aven, but that ended as soon as Sol played a Faceless Butcher. He removed the mage from the game, and looked to be in the form of taking over the game. Not to be outdone though, Weil cast a Butcher of his own, taking Sol's Butcher and regaining his mage. This went on for a while, and Malka was forced to discard his hand to put regeneration shield on his gnomes and gain threshold. Shower of Coals was slammed down on the board, but Noah confidently tapped two lands and played Rites of Refusal.

With little time remaining, the side boarding was finished quickly. Malka opted to play first, and again the players kept their opening hands. Keeping with the spirit of the past two games, a Skywing Aven was played by Noah. Malka got out of his land slump and cast a Finkel blocker in the Patchwork Gnomes. The gnomes blocked for a while, but Mesmeric Fiend comes down to gang block the mage. Noah ran out of gas, and Ambassador Laquatus was milling away as fast as he could. Unfortunately for the birthday boy, it was not enough. Shower of Coals cleared the board, and ended Weil's party.

1 Dawn of the Dead