irst-class Hall of Famer Darwin Kastle has been playing Magic for a very, very long time. He was the designer of and featured in the first printed Magic Invitational card, Avalanche Riders from Urza's Legacy. He has eight Pro Tour Top 8s, including a win as a member of Team Your Move Games in Washington D.C. 1999 alongside fellow Hall of Famers Rob Dougherty and Dave Humphreys. Nowadays, Kastle's work as a game designer keeps him busy enough to prevent him from attending many Grand Prix weekends, but he still takes time out of his schedule to attend Pro Tours when he can.

Nam Sung Wook is one of only two South Korean players here in Day Two of Pro Tour Journey into Nyx. Alongside his countryman Jun Young Park, Nam has joined the ranks of Team MTG Mint Card, the Asian superteam featuring the likes of Lee Shi Tian, Tzu-Ching Kuo, Chapman Sim, and Kelvin Chew. Nam was the winner of Grand Prix Melbourne earlier this year, making him the first South Korean player to ever win a premier-level event. His presence on the already superb Team MTG Mint Card is already being felt, as it was the list he and Park tuned that the team opted to use as their deck for this event. Nam currently has a two-point lead on Park in the race for South Korean World Magic Cup captain, though he trails Lee Shi Tian by a decent 18-point margin for the APAC representative slot in the World Championship. A strong finish here at the Pro Tour has the potential to catapult him into the lead with only three months remaining in the season. 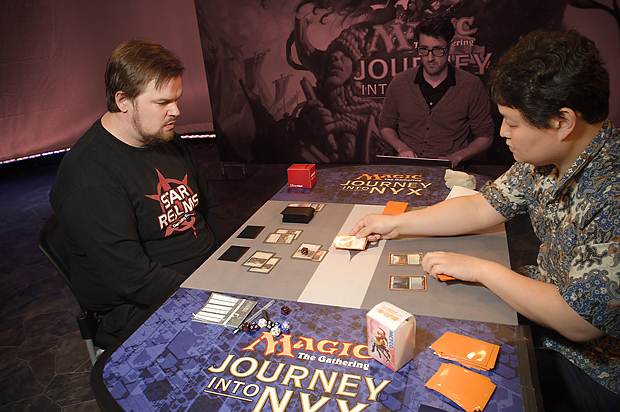 Darwin Kastle, Hall of Famer and official Avalanche Riders, is ready to battle against Nam Sung Wook, one of two South Korean players to make it into Day Two of this Pro Tour.

Kastle has opted to play White Heroic this weekend. The deck features all of your favorite draft all-stars, including Phalanx Leader, Favored Hoplite, and Hero of Iroas. Heroic creatures are pretty meaningless without ways to set them off, and this deck features a slew of the best: Launch the Fleet, Hopeful Eidolon, and Eidolon of Countless Battles among them. White aggressive decks have fared fairly poor in Block Constructed thus far in the tournament, but Kastle managed an impressive 4-1 record yesterday with the deck.

Nam is playing another deck that had subpar results yesterday: Junk Constellation. This deck was the most-played deck in the tournament, but it won less than half of its matches all day. The deck features the ubiquitous combo of Sylvan Caryatid and Courser of Kruphix backed up with black spot removal and Elspeth, Sun's Herald. The deck also features Eidolon of Blossoms as a source of card advantage.

Game 1 went south for Kastle from the very first turn. An early Thoughtseize from Nam allowed him to peer into Kastle's hand, denying him a Gods Willing from a hand with a Lagona-Band Elder and Hopeful Eidolon. Two turns later, a Brain Maggot took a second shot, stripping an Eidolon of Countless Battles from his hand. Left relatively neutered, there was little Kastle could do when Nam hit turn five and cast Elspeth, Sun's Champion. With nothing but a 0/4 and a 1/1 lifelinker in play, Kastle had no way to get through the defensive wall of tokens, conceding a turn later. 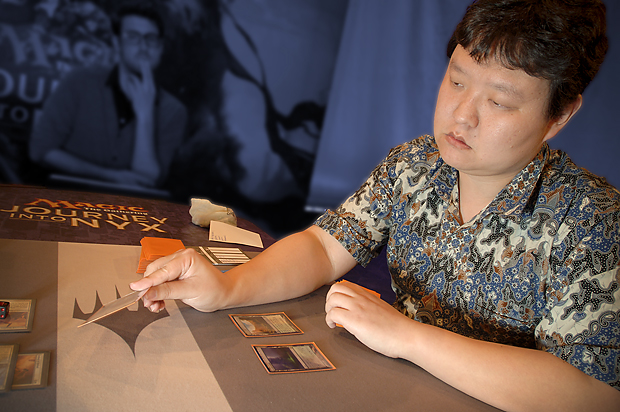 Nam's hand disruption strips Kastle's options away from him.

The second game started out much better for Kastle. Favored Hoplite and Phalanx Leader provided an impressive one-two punch straight out of the gates, made better by the addition of an Ordeal of Heliod on the Phalanx Leader, enhancing the whole team. Nam looked like he might be in trouble in the face of this aggression when he failed to play a third land on the next turn, but appearances were quite deceiving. On consecutive turns, Nam managed to use his two sideboarded copies of Feast of Dreams to kill both of Kastle's creatures, leaving him with only a Hopeful Eidolon in play. This in turn fell to a sideboarded Deicide, clearing Kastle's board.

Kastle continued to empty his hand onto the board, dropping Hero of Iroas and Brimaz, King of Oreskos, onto the table, but they were met with a pair of Banishing Lights. Both players were more or less spent at this point, and were forced to resort to the tops of their decks to get things done. Kastle was the first to get ahead, ripping a Banishing Light to free up his Brimaz. Nam ripped Hero's Downfall. Up next was an Eidolon of Countless Battles, but it also bit the dust, dying to a Silence the Believers. 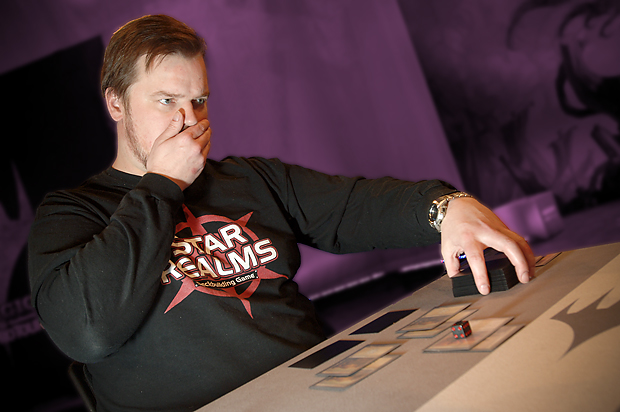 Kastle's deck is powerful, but it does require at least one creature to survive.

After playing a Courser of Kruphix, Nam finally swung things in his favor, his Courser giving him the clear advantage. While Kastle drew lands, Nam was able to play them from the top of his deck, freeing himself up to draw cards while slowly negating the damage that Kastle had inflicted thus far. After a few turns of futility, and with Nam drawing into actual threats, Kastle conceded.

4 Fleecemane Lion 3 Reaper of the Wilds