Round 12: Takao Higaki vs. Katsuhiro Mori 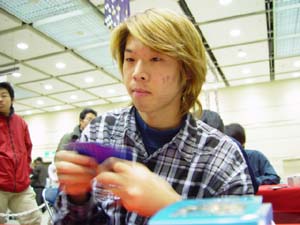 Local Boy Takao Higaki is tearing up this Grand Prix with Tinker. If he keeps his current pace, he'll have a title of his own before the day is done. First he must best Katsuhiro "Blitzschlag" Mori, former Rookie of the Year and the fastest hands in the east. Mori is playing a Burning WishPsychatog deck that's packed with hate for creature decks. He's ill-equipped to handle Tinker. In fact, he drew with Akira Asahara in round 7 rather than risk his Day 2 against it.

Higaki earned the right to play first, a huge advantage. Mori added to it by mulliganing. Higaki started with Ancient Tomb, Grim Monolith and Metalworker. Mori dropped Urborg Volcano. Higaki made Saprazzan Skerry and showed a pair of Masticores to untap his Monolith. He was setting up for a huge Stroke of Genius. Mori Fired the Metalworker to keep things reasonable. Higaki drew five. 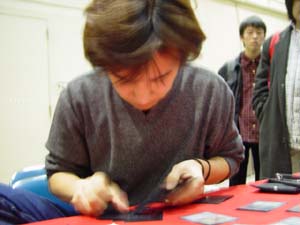 Higaki practically fell out of his chair when Mori started Game 2 with just an Urborg Volcano. His Ancient Tomb and Defense Grid fell onto the table of their own accord. Mori had no follow-up, and Higaki was free to resolve Metalworker.

Mori untapped, dropped his third land, and tapped all three, putting down Nightscape Familiar and aiming Fire at the Metalworker. The judge reminded him that his lands were Urborg Volcano and two islands. Worse, he couldn't take back his Familiar, and so was unable to dispatch the Worker. Given the contents of Higaki's hand, it looked like he would win regardless, but suddenly the game was a slaughter.

He untapped, then displayed four artifacts with the Metalworker. The eight mana gave him two Thran Dynamoes, and that let him play Stroke of Genius for five. That, in turn, handed him Voltaic Key to untap the Metalworker and show three more artifacts to give him a Planar Portal. Mori packed it in.