Round 12: Takao Higaki vs. Min-Su Kim 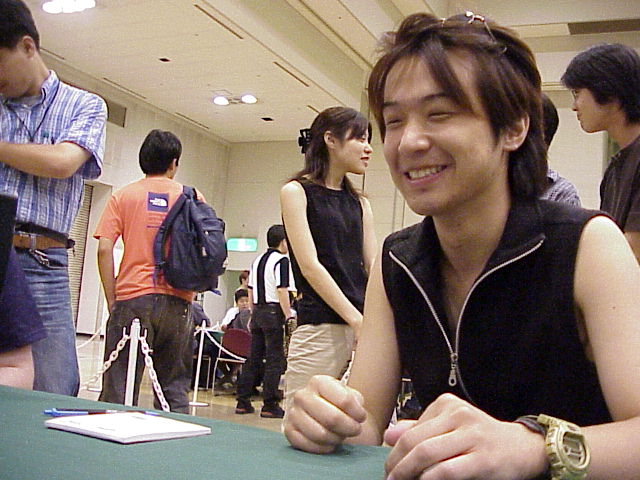 Next on the Feature Match menu today are Takao Higaki and Min-Su Kim. With records of 9-2, a loss here would put their Top 8 hopes in serious jeopardy. Kim won major prominence earlier this year by making it to the finals at Japan's Nationals this year. Higaki also came with a hot streak, earning a top 4 with Team Voice of Soul at Grand Prix: Yokohama.

After starting with a deck check, both players relaxed, though Higaki needed to replace some of his deck sleeves. Like many of the top Japanese players, Higaki's deck is shiny and foily. His deck, sometimes known as "Arena, Cats and Rats", used Spectral Lynx and Ravenous Rats to hold the fort down while building mana and resources up with Phyrexian Arena for a series of lethal Death Grasps. Dromar's Charm and Gerrard's Verdict keep the defense going until a Yawgmoth's Agenda locks up the game.

Kim's Machinehead deck features Plague Spitter, Flametongue Kavu, Phyrexian Rager, and two creatures with key protection from white, Shivan Zombie and Crypt Angel with Terminates, Ghitu Fire, Urza's Rage, and a single Agenda. The advantage leaned to Higaki, since Kim's most powerful offense might be too slow to overtake Higaki's bid for control.

Higaki's luck turned poor after his rock defeated Kim's scissors. A zero land hand forced him to mulligan. He dropped a Ravenous Rats on the second turn, forcing Kim to lose a Terminate. Higaki continued to take the lead in the game, playing a Spectral Lynx on turn 3, but failed to get the third land to cover the Cat with a regeneration shield. Kim's Ghitu Fire made him pay for it.

Kim followed with a turn 4 Shivan Zombie that took the offensive and got a back up from a Pyre Zombie. On the ropes, Higaki decided to head off Kim's offensive by striking at Kim's mana base, Vindicating a Swamp and the following turn Recoiling Kim's Urborg Volcano. Kim took the tempo loss in stride and continued to hammer away with the Shivan Zombie, his Pyre Zombie put to bed temporarily by the Ravenous Rats. Higaki declared the board 100 percent Shivan Zombie-free with a main phase Rout. Kim could do little more than pass his turns while sitting at three lands. Higaki's next play, a Spectral Lynx, was Terminated. Higaki continued to draw lands while Kim started to discard.

Kim's grasp on the game went from bad to worse as Higaki lucked into a Phyrexian Arena. A Death Grasp in hand assured him that it wouldn't get him in too much trouble. Kim finally played a fresh land and dropped a Phyrexian Rager, putting Higaki back on the defensive. Perched at ten, he Death Grasped the Phyrexian Rager for 6, buying him life and time to continue to build his hand. Kim retorted by throwing down another Phyrexian Rager. The Rager knocked Higaki down to 14 and a Shivan Zombie came to assist, but both were Routed away.

Higaki threw down a Spectral Lynx that regenerated when licked by an opposing Flametongue Kavu. Kim shot a Ghitu Fire for 1 to tap and regenerate the Lynx, clearing the path for the Flametongue Kavu. A new, elusive Shivan Zombie backed him up. At this point, a mere 6 points of life separated Kim from victory, and a topdecked Urza's Rage would seal the deal.

Higaki would have none of that. After getting set back to 6 life, Higaki flung a Death Grasp for six at the Flametongue Kavu while holding mana for Dromar's Charm to stop any surprises. Higaki then started to tear the roof off of the house, playing two Gerrard's Verdicts. The malicious judgments dumped two Plague Spitters and Crypt Angels into Kim's graveyard. Undeterred, Shivan Zombie continued the assault and was joined by a Phyrexian Rager. Kim finally hit five mana and attempted a Yawgmoth's Agenda, but the Agenda was dismissed by a Dromar's Charm.

Kim then hit the critical 6 mana threshold where he could return the Pyre Zombie to his hand and cast it. With his opponent at 5 life, Kim's hopes started to rise. However, the dawn was a false one. Higaki took the opportunity to Death Grasp for a searing ten points of damage, hauling Kim down to 4 and putting himself back to 14. Higaki but was brought back to 10 by the Rager and Zombie. The game would be Higaki's if he drew an Agenda or his fourth Death Grasp. Smoothly drawing an Agenda, he laid it on table and Kim conceded. Both sighed; the grueling game had finally ended. 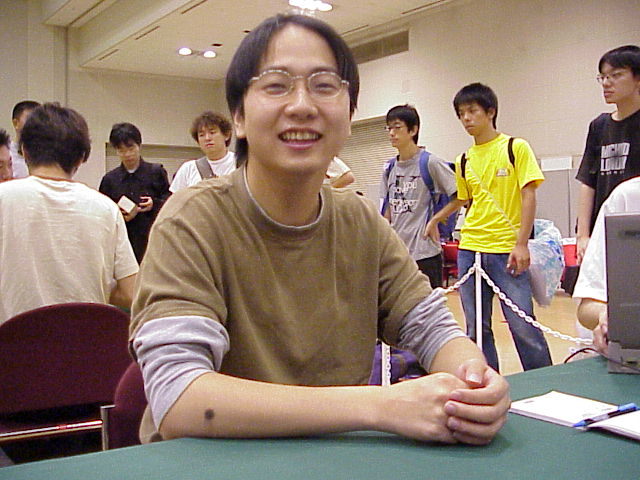 Game two started with 18 minutes on the official clock, but a judge informed the table that there would be a time extension. Higaki sighed in relief, while Kim rocked his head back and forth in anxiety. The two took a short minute to sideboard and shuffle. Kim started and played the first card, a Phyrexian Rager, which was countered by Dromar's Charm. Higaki refused to counter a Shivan Zombie with his second Charm, but followed with a Ravenous Rats the following turn that nibbled away an Urza's Rage.

The Shivan Zombie kept up the attack, knocking Higaki back to 16. Higaki Vindicated Kim's Urborg Volcano, and followed with a Fact or Fiction. Piles were sorted into Death Grasp and Rout versus Yawgmoth's Agenda, Ravenous Rats, and a Caves of Koilos. Higaki went for the Agenda pile. He immediately cast the Rats, who chewed away a Ghitu Fire. The Rats tarried the Shivan Zombie for a turn, and Kim rapped his deck for luck after Higaki countered an Addle.

Higaki then threw down an imposing sideboarded Urborg Shambler, and Kim could do little but allow the Shambler to pound away at his life total the following turn. Higaki then Death Grasped for 6, pulling his own life total up to 21 while dragging Kim down to 10. Kim passed his turn and the Shambler returned for another 4, followed by another Death Grasp. Kim smiled and shook Higaki's hand warmly.

After the match, Kim lamented that his Crypt Angels were absolutely of no use in the first game. Higaki showed the two Lobotomies he had sideboarded in, which Kim dismissed.