Round 12: Taking an Easy Road

've been flaky in this position before," lamented Craig Jones. The Brit was atop the standings again, just as he was at PT-Los Angeles several months ago. Jones collapsed in that event, however, and failed to make the Top 8 despite his 8-0 start. 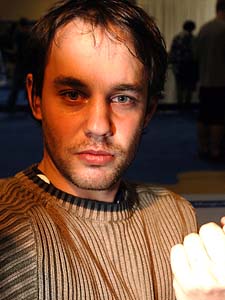 The mean look won't help you against the Zoo, Antoine

He shouldn't have trouble improving his record in this matchup, as his opponent, Antoine Ruel, is running the Owling Mine deck, which most pundits claim is an auto-win for Jones's Zoo deck.

"You know," deadpanned Ruel, "I have my face on a card when you open the starters, and I won a Pro Tour."

"Yeah, we won't talk about that," said Jones sheepishly.

The beatings commenced in short order are Jones began with Isamaru and Kami of Ancient Law. Ruel had Pyroclasm at the ready and swept away the initial rush, silently thankful that Kird Ape was nowhere to be seen. 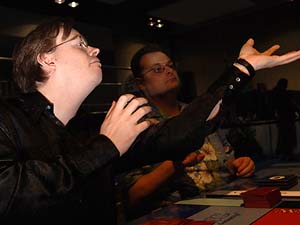 Victory was within reach for Jones

Jones came back with a Burning-Tree Shaman which was sent home with an Eye of Nowhere, but the subsequent second Eye was countered by Jones's maindeck Bathe in Light (Radiance in Constructed! Yowza!). A second Hound added to Ruel's misery, and his laughable Ebony Owl Netsuke could do nothing to stop the beats.

"You'd think the Owl could block. It's an Owl," proclaimed Becker.

Jones had several Tin-Street Hooligans at the ready in his board. Ruel, meanwhile, had no plan against Jones's deck and sideboarded in some random cards and took out equally random cards, including one Island. The Frenchman drew his opening hand, showed it to me, and chuckled in hopeless resignation.

Jones came out with his normal early creature rush. Ruel did his best to buy time - a Remand here, a Gigadrowse there, Exhaustion you, Twincast a Helix onto a Kird Ape -
but at the end of the day, there was no reasonable way for Ruel to get his Howling Mine/Sudden Impact nonsense to work against a deck full of cheap threats, burn, and artifact destruction. 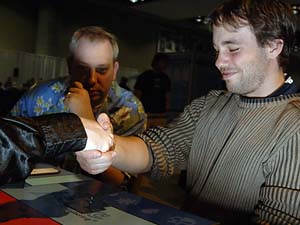 The end was quick for Antoine

Antoine's brother Olivier defeated Mark Herberholz in this round, putting both Ruels at 9-2 heading into Round 12. Will Antoine's Owl deck be facing Olivier's Orzhov Aggro deck next round? Wait and see…