Round 12: Terry Lau vs. Cory Bradshaw 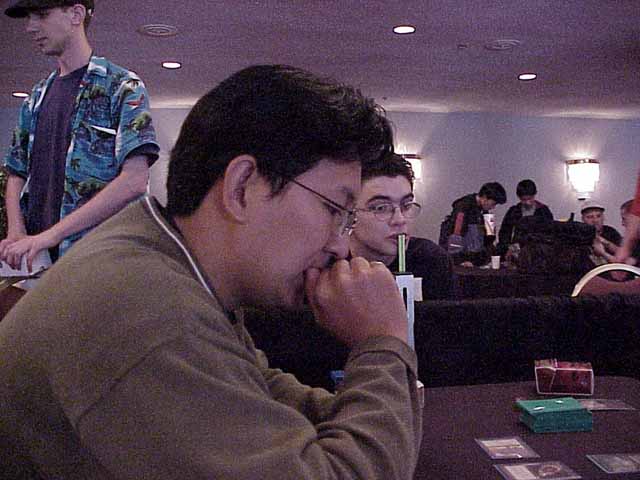 Terry Lau is an old-school Vancouver player who over the years has played as much Magic as the rest of his life has allowed. He made the Top 8 at PT - LA 4 (where he lost to eventual champion Steven O'Mahoney-Schwartz in a close semifinal). After that his marriage and an ankle injury prevented him from traveling to tournaments, but with Canadian Nationals in his home town this weekend nothing could keep him away. A 3-3 record in the draft meant that if he wanted to advance to Sunday's Top 8, he couldn't lose another match. He (along with longtime playtest partner Pete Radonjic) decided to run a copy of Alex Mitchell's Tinker deck. After four rounds Lau found himself 4-0-1 on the day and playing Cory Bradshaw in a feature match with Top 8 on the line: the winner is in and the loser is out. Bradshaw and his Angry Hermit deck have been near the top of the Swiss all day.

Things looked good for Bradshaw when Lau took a mulligan and Bradshaw played a second turn Rofellos. However, all Bradshaw could do with Rofellos on his third turn was attack. In contrast, Lau's third turn included Thran Dynamo, Voltaic Key, and Masticore. Bradshaw then cast Plow Under, which kept Lau at six (!) mana. 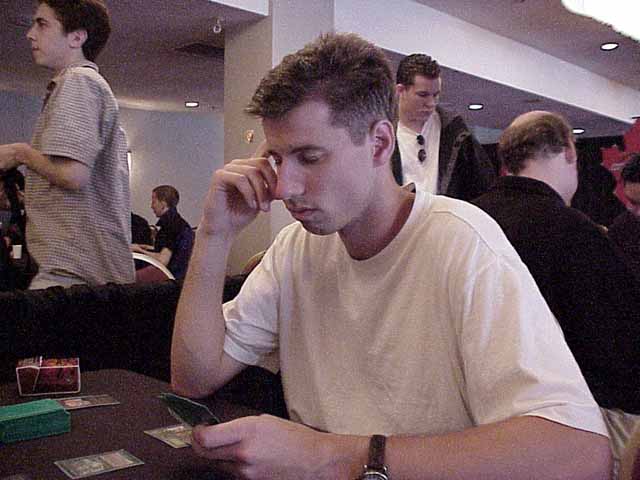 Over the next few turns, Lau killed all of Bradshaw's mana creatures, played a Phyrexian Processor (paying 7 life) and then killed a Skyshroud Poacher before it could search for its elf buddies. Bradshaw tried to keep up with a Deranged Hermit and a Masticore of his own, but he just couldn't do it.

Lau had a lot of mana in his draw for the second game: Saprazzan Skerry, Crystal Vein, Metalworker, and Thran Dynamo. However, he didn't have a lot to do with it--just Masticore. Bradshaw's second turn Port slowed Lau down, but slow is kind of a relative term in the Tinker deck. Lau drew Grim Monolith and sacrificed his Crystal Vein so he could play Monolith and then Metalworker on his second turn. Metalworker fueled a third-turn Dynamo plus Masticore before Bradshaw could draw the red mana he needed to kill the Metalworker with Arc Lightning. After tapping out for Masticore, Lau asked out loud, "Do you have your one Splinter? That's what I want to know." Bradshaw's answer was "I'm not that good of a player."

Next turn Lau dropped Tangle Wire and after that came a second Tangle Wire. Those Tangle Wires kept all of Bradshaw's lands tapped while Masticore attacked five times. Radonjic, in the crowd, asked "Who Tangle Wires Angry Hermit?" Terry Lau does, evidently, and Terry Lau will be playing tomorrow in the Top 8.