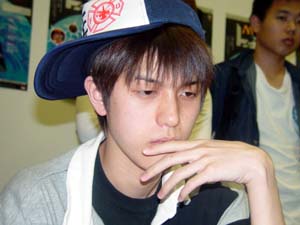 Kenji Tsuruma has managed to qualify for the Pro Tour not once, but five times before the age of 18. But he's never made it past day 1 at that stage. At 8-3, he needs to win to stay alive in the tournament. His opponent, Osaka local Teruya Kakumae, has had few major Magic accomplishments of late, but he'd like to change that. Both players are 17 and have yet to graduate high school. Tsuruma brought the much-loved and much-maligned Ravager Affinity to play while Kakumae has a Big Red deck similar to that of Masahiro Kuroda's at PT Osaka.

After a lengthy deck check, the players' decks were returned to them and the game started. Tsuruma won the die roll and went first after taking a mulligan. He led off with a Seat of the Synod and a Chromatic Sphere. Kakumae played a Blinkmoth Nexus. Tsuruma followed by sacrificing the Chromatic Sphere for black mana and playing a Disciple of the Vault. Kakumae could only play a Talisman of Impulse, and passed the turn. Tsuruma was still stuck at a single land, attacked with the Disciple, and played a Pyrite Spellbomb. Kakumae merely dropped a land on turn 3, and Tsuruma could do little more than play another Pyrite Spellbomb.

Kakumae untapped and played an Arc-Slogger. The Disciple knew its days were numbered. Tsuruma untapped, drew a Seat of the Synod, and used it to Thoughtcast and play another Chromatic Sphere. The Arc-Slogger shot down the Disciple and attacked along with the animated Blinkmoth Nexus. But Tsuruma was drawing into his mana, and his deck took off. He dropped a Arcbound Worker and Myr Enforcer. Kakumae untapped and used a Shrapnel Blast sacrificing a Medallion to kill the Enforcer. In response, the doomed Enforcer was sacrificed into a Shrapnel Blast of Tsuruma's own targetting the Arc-Slogger. Before heading off, the Slogger shot down the Arcbound Worker.

Kakumae's Blinkmoth Nexus kept the offensive up, but it was a half-hearted effort. All Kakumae had in hand was a Shrapnel Blast, a Pyroclasm, and two Seething Songs. He needed to draw a Furnace Dragon to wipe out Tsuruma's deck, but it was not meant to be. Tsuruma played an Arcbound Ravager and another Pyrite Spellbomb. A Welding Jar kept the Ravager alive, and the Ravager put Kakumae away. Kakumae's sideboard is heavily directed towards Affinity, so we'll have to see what happens in game 2. 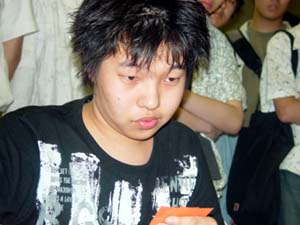 Kakumae started off with a mulligan, then played a Blinkmoth Nexus. Tsuruma dropped a Great Furnace, a pair of Welding Jars, and a Chromatic Sphere. Kakumae untapped and Detonated the Great Furnace. Tsuruma declined to save the land with a Welding Jar. He untapped and played a Vault of Whispers. On his fourth turn, Kakumae played a Solemn Simulacrum, fetching another Mountain. Tsuruma dropped a Myr Enforcer, but kept it home over the next few turns. He didn't want Kakumae drawing any more cards. Tsuruma built up his potential offense with a Somber Hoverguard, and then made a pair of Arcbound Ravagers. Kakumae was sitting pretty on defense, and was waiting to draw a Furnace Dragon. But none made it in time as Tsuruma played not one but two Disciples of the Vault and launched a lethal attack.