Round 12: Tilt Takes a Terrible Toll 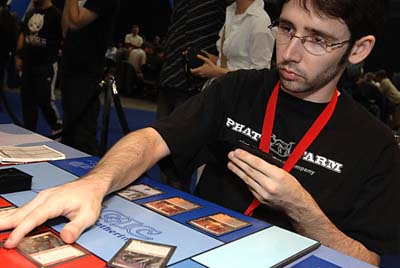 Joseph Crosby was still shaking off a mistake from Round 12

we finish up the last round of this second-to-last draft, Rasmus Sibast is back on top at 11-1. Joseph Crosby, at 10-1-1, is coming off a disappointing draw with Olivier Ruel where he feels he simply through the win away on a blunder. Had he played it right, he felt he would have won the match rather than drawing, something that's clearly still bothering him as he comes into the round. Sibast, on the other hand, just put another win away after registering his first loss in Round 10. With just three more rounds after this one, a win here would put him in a dominating position for Top 8.

Sibast was on the play for this one. Both players just played land the first couple turns, with Crosby discarding a Rise&Fall after playing Rakdos Carnarium on his second turn.
Sibast answered with Silhana Starfletcher, a card that's gone up quite a bit in value this weekend thanks the havoc Dissension can play on mana bases, not to mention the bevy of 2-power fliers now flitting about the format. For Crosby it was Goblin Spelunkers, with his opponent having two mountains in play. Sibast answered with a Streetbreaker, and the race was on!

Crosby came next with a Daggerclaw Imp and a second Rakdos Carnarium. He took a hit for 6 from the Streetbreaker, then flinched when an Assault Zeppelid came down as well, leaving the Starfletcher up for possible blocking duty. Crosby swung in with both his creatures, but I was surprised to see that Sibast didn't block with the Starfletcher after all, possibly needing the black mana since none of his lands could produce that color. After the swing, it was Sibast 13, Crosby 14

Next up was Enemy of the Guildpact for Crosby and Zeppelin number 2 for Sibast. This time the Elf did take one for the team, bringing the Daggerclaw Imp to the bin with it, putting it at a dead even 11-11.

Protected from the Streetbreaker by the Enemy of the Guildpact, Crosby's main problem was the Zeppelid pair. Fortunately for him he had an answer to the first, dropping a triple Pyromantics to take one down. Things looked scary next turn however when Sibast swung in and played a +1+1 Burning-Tree Bloodscale, a creature known for making defense difficult. Playing the last card in his hand, a Dimir Aquaduct, it became clear the black mana from the Starfletcher had never mattered, so possibly Sibast took three damage he could have avoided. Whether that would matter remained to be seen, but I would guess Sibast would have preferred the life in this tight race. Then again, that's easy for me to say sitting here on the sidelines with nothing at stake. Had he blocked and then drawn a crucial black spell, he wouldn't have looked the genius either. This Magic thing is pretty hard!

This was a long one for Crosby as he worked out his options. After quite a while, he cast a Banshee to take out a Bloodscale Prowler that had come down with the Burning-Tree Bloodscale, then swung in with Spelunkers and the Enemy of the Guildpact, tapping out for a Gelectrode for defense to try and get through the turn, making it Crosby 8, Sibrast 5

Sibrast untapped, looking a bit surprised. "You're at 8 right?" Crosby saw his mistake immediately. Sibrast tapped his mana, telling both blockers to tangle with the Bloodscale, allowing the Zeppelid and Streetbreaker to put it away. I asked Joseph if he'd just flat-out missed the kill on the board and he quickly responded with an honest yes. "I was looking at it so many different ways, I just lost track of it." Verifying that it was when his opponent asked if he was at 8 that he noticed his mistake, he nodded, adding, "My feature matches are not pretty today. I need to calm down." A sigh, but also a look of determination, and Crosby started shuffling his cards. 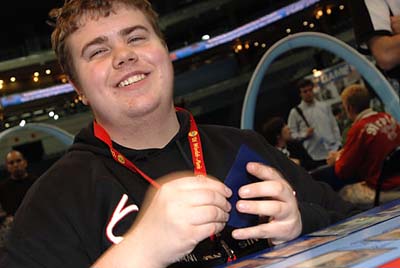 Nothing wrong with free wins!

This one went much like the first, with both players throwing out creatures, taking turns exchanging blows as life totals dropped rapidly. Here's how the first five turns went, just focusing on the creatures summoned, since attacking should be obvious for this one.

From here, Tibor and the Dragonauts swung in, making it Crosby 14, Sibast 13. Crosby added an Exhumer Thrull (with an empty 'yard) to help shore up his defense, chumping with it to the Prowler and haunting Tibor. Starfletcher on black came next from Sibast, who still had four mana open.

Next came Petrahydrox for Crosby, with a misplay by Sibast, who could have bounced it during the end of Crosby's turn with all that extra mana. This kind of thing isn't as rare as you might think by the way. Given what a beating Day 1 of a draft Pro Tour can be, players are often exhausted as Day 2 unwinds, so mistakes seem in my experience at least to be much more common around this stage of the tournament, just before all that adrenaline starts kicking in and (temporarily) sharpens those senses back to lucidity. Fortunately for him Sibast bounced it on his own turn and sent in the Prowler and Zeppelin, with the Dragonauts chumping to the Zeppelin to try and buy some time. Then the haymaker landed, as Drooling Groodion came down for Sibast, drawing a visible reaction from Crosby. (Crosby 8, Sibast 10)

Crosby swung in one last time with Tibor and Lumia, dropping his opponent to 7, then started thinking. Nodding toward the Groodion, Sibast smiled.