Onlookers slowly made their way to the feature match area as Stuart Wright and Helmut Summersberger shuffled silently in preparation for the round. A judge interrupted their process by asking Wright whether he was from Britain or Ireland. “Uh... Britain. I guess Ireland’s an island nearby so it’s kind of the same thing, but...” 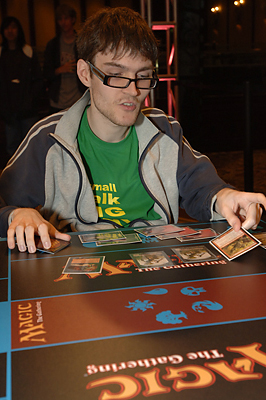 Stuart Wright, mad scientist.Summersberger managed to snag the die roll and opened on Faerie Conclave, indicating he was playing the most popular deck on the weekend, Faeries. Wright, playing an innovative Black-Red Tokens deck of his own design, had one of the best opening plays possible against the Faerie scourge: Shadow Guildmage. The 1/1’s “Tim” ability could kill nearly all of the creatures in his opponent’s deck without costing Wright so much as a card.

The Austrian sat back, and when Wright made a third turn Magus of the Moon, Helmut was ready with a Terror for the 2/2 in order to keep his lands functional. A Marsh Flitter joined Stuart’s team, and Helmut was forced to Nameless Inversion the 1/1 to prevent the board from getting out of hand with his opponent essentially controlling The Abyss. Wright’s deck has actually picked up a lot of notoriety this weekend for its innovative concept. He tries to generate as many tokens as possible via Mogg War Marshal, Marsh Flitter, and Bitterblossom before abusing them with Greater Gargadon, Nantuko Husk, or the deck’s biggest surprise, Furystoke Giant. The Giant, which enables the deck to kill an opponent out of nowhere by pinging them to death, has led to some dubbing the deck “Pew Pew Tokens” (Aaron Forsythe’s suggestion “Stokin’ Tokens,” has its adherents as well).

It was that very member of the Giant tribe that was Wright’s next play, and Helmut was quick to play Cryptic Command in response, though he hesitated on what the second mode was going to be. Eventually he opted to counter the Giant and bounce the Shadow Guildmage. Summersberger followed that play with a Vendilion Clique on his opponent’s next draw step, seeing two lands and two Nameless Inversions from his opponent after putting the troublesome 1/1 on the bottom of his opponent’s library. Things weren’t looking promising for the Austrian, whose board consisted of only lands once Wright Nameless Inversioned the 3/1 Clique (though to be fair, two of the lands were a Faerie Conclave and Mutavault).

The back and forth continued with Stuart making aggressive attacks and feeding his blocked creatures into a Greater Gargadon he had managed to suspend. Meanwhile Helmut came right back with a Mistbind Clique he had managed to draw and attacks using his creature-lands. In the lead at 14-13, Stuart made an executive decision: the game was slipping out of his grasp and with Summersberger tapped out he needed to aggressively move in with Greater Gargadon. The downside to that was that he would have to sacrifice all of his permanents save for a single Mountain to do so, but the ploy worked and Helmut fell to 4. Unfortunately for the Brit, a second Clique meant Helmut had plenty of chump blockers to continue getting through in the air and Wright packed it in when the top of his deck revealed nothing but land.

“Not the best hand,” quipped the Austrian, shrugging sheepishly. Stuart nodded in agreement and quickly binned the Ancestral.

Helmut drew for his turn and looked even more sheepish as he played a second Ancestral Vision, straight from the top.

The Brit wasn’t going down without a fight, however, and developed his board with a Mogg Fanatic and Kher Keep that could eventually create the tokens necessary to get more bang for the buck out of Furystoke Giant. However deflated he had been upon seeing his opponent rip Ancestral Vision to significantly improve an otherwise weak hand, he managed to sink even lower with Helmut’s second draw of Bitterblossom. 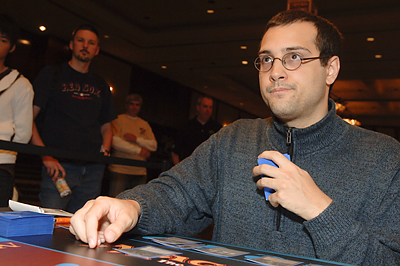 Helmut Summersberger, lucky and good.”Really?” bemoaned Wright, cursing his luck at having the best counter to both Visions and Bitterblossom on turn one, only to see the advantage completely nullified by two random draw steps from Summersberger. Helmut, the consummate professional, gave no inclination as to what effect his fortunate draws were having on his psyche. He simply put 1/1 Faerie Rogue tokens into play until he had enough to play a Mistbind Clique, tapping his opponent out.

Summersberger’s Ancestral Vision eventually netted him three additional cards, but Wright continued to fight on, using a Thoughtseize to remove one of his opponent’s Cryptic Commands. He would need to make sure any potential Furystoke Giants were going to resolve and decimate his opponent’s board, and Cryptic Command could disrupt that two-fold by countering the Giant and/or tapping Stuart’s forces.

Still, the opposition was overwhelming, and when Helmut made a Terror on Stuart’s Mogg Fanatic with 7 points of damage threatening in the air, Stuart resignedly scooped his cards.

“May I see your deck?” Helmut asked, after signing the slip. “I tested against Goblins and it was pretty good for me.”

“Yeah, the matchup is supposed to be good for me. I beat the other three Faeries decks I played.” Stuart explained, before offering his deck to his opponent for a peek and wishing him luck for the rest of the event.