Round 12: Tom Kelleher vs. Gab Tsang 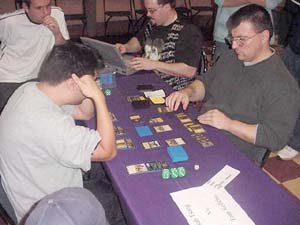 The crowd around Kelleher was hooting and hollering. "Go, Kelleher! Go Kelleher!"

Tom's a local favorite, a 280-pound lawyer from Philly who's renowned for his sharp eye for money drafts, his unconventional picks in drafts, and his ability to drink any man in town under the table. He's currently 9-1-1, and on top of the world; friends have long said that he had the skillz to pay the billz, but if he does it well today he may prove himself a champion.

"A mirror match? Aw...." said Gab Tsang, one of the old-timers and all-around Good Guys of Magic, who's been racking up team wins right and left since time immemorial, but he's been looking for his own win as an individual. He got robbed of a potential win at Grand Prix - Cleveland in an act of statistics that babies in China are still crying about, drawing an astonishing fifteen lands in a row during the third game of the finals.

Needless to say, he's hungrier for the win than ever.

Tsang rolled a nine, while Kelleher rolled a seventeen. Tom opted to play, offering the hand in luck. Gab took it and wished him luck back - which, at the top levels of play, is not always a given.

Both kept, and Kelleher led with a swamp, which Gab matched with another swamp that led into a second-turn Wretched Anurid. Tom flipped his land back and forth a few times before committing three mana to his pool to summon a Daru Healer. Gab swung with the Anurid; Kelleher, not surprisingly for the early game, took it like a man, dropping to seventeen.

Gab looked at his hand for a few moments, debating what to cast, then dropped a Nantuko Husk, a card that increasing numbers of Limited players are finding irritating. Kelleher matched it with a Nameless One, which was only a 2/2 at this point in the game, but would give him life if it blocked or attacked - and was sheer gold in this cleric-on-cleric mirror match.

Kelleher summoned a Crude Rampart, and blocked the Husk with it the next turn; Gab, knowing he needed fear no Shock, sacced both the Rotlung token and the Anurid to the Husk to kill the wall, then summoned a Soulless One - another power card in a black-and-white mirror match, and it was now a 5/5.

Tom matched that power with a swampwalking, unblockable 4/3 Anurid Murkdiver. Gab cast a morph and another Anurid, hoping to speed up the clock, then attacked with everything he could. Kelleher blocked the Husk with the Murkdiver, and the Husk ate its second Anurid to destroy the Murkdiver wholesale.

Kelleher attempted to cast a Sandskin on the Husk, then cast his bomb: Mobilization, giving him an endless stream of chump blockers. Gab attacked with both morph and Soulless One, but the Soulless one met a handily-expendable soldier token; the morph's damage was prevented with the Healer, and Gab summoned a Screeching Buzzard.

Bomb #2 hit the table as Kelleher smacked a Silent Specter, unmorphed, onto the table.

He swung the Buzzard and the Soulless one in, and the Soulless One bit deep... But the Buzzard ran into the Specter and was gobbled up, forcing Tom to discard his only card and putting him into topdeck mode. Admittedly, this was topdeck mode with a Mobilization, so it wasn't entirely unpainful. Gab created another blocker in the form of a Glory Seeker. 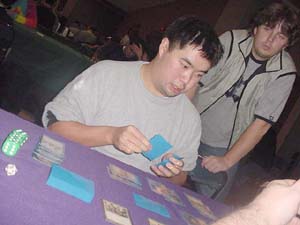 Gab counted the zombies; "Yeah, he's pretty big," Tom said, acknowledging that the Soulless One was now an 8/8. Gab sent in the Soulless and morph, while Tom made two soldier tokens... And blocked the morph with the Specter in a move that made the crowd gasp. The morph turned out to be a Daru Lancer, one of white's famed big morph creatures, which snuffed the Specter and Tom's immediate offense. Undaunted, a Frightshroud Courier and a Shepherd of Rot leapt to Tom's defense. Gab tried to swing in, but a lowly soldier token stopped the Cavalier's Onslaught the next turn... And the Cavalier met a Cruel Revival, dispatching it handily while retrieving the long-lost Anurid Murkdiver.

All Gab could manage in response was a Glory Seeker.

The Murkdiver, boosted by the Courier, went in, dropping Gab to nine and then three. Things were getting ugly.

"You're at three, right? And I'm at five?" Gab nodded sadly, and Tom then Shepherd of Rotted his way out for the game win.

"I should have taken that thing," said Tom regretfully, pointing to the Soulless One. "I have a ton of frickin' zombies."

"That was a tight one," said Gab, laughing. "My draw was really insane."

"Yeah, it was," Kelleher said. "My draw was really slow."

"Your draw was better," he said.

Tsang played, flipping through his hand with the expression of a man enduring a hotfoot. He grunted "Nah," then sent it packing back.

"That's always the right decision, you know it," sympathized Kelleher, "But secretly, I'm having a party."

Tsang kept his second hand, and both of them had a slow opening, with Kelleher finally casting a morph on the third turn - it wasn't out of the gates before it got Swatted, though, which was a good thing as it turned out to be a Fallen Cleric. A quick flurry of land, go ended up in an Aven Fateshaper for Gab, and all Kelleher could muster is a Spined Basher. The two traded back and forth once before a Cruel Revival smacked the Fateshaper, retrieving the Fallen Cleric.

So early, so ugly. 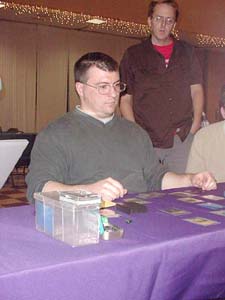 Gab made a morph while Kelleher sent in the Basher, summoning a goblin and a morph of his own. Gab decided whether it was worth it to attack in, but ultimately decided he should cast his own Cruel Revival... Sending the Fallen Cleric tumbling back to the grave. Clerics were falling like flies....

The Spined Basher went in, only to discover that a morphed Gravel Slinger doesn't like one-toughness creatures a whole lot. Kelleher then summoned his Anurid Murkdiver, which repeated the beating of the last game, dispatching Gab within three swings.

Tom had had the opportunity to pick the Soulless One over the Mobilization, and in retrospect he would have. But in all likelihood, Gab would then have had the Mobilization in his deck, giving him an endless stream of chump blockers - since once again, Gab drew more land than a man had a right to have, and the Mobilization would have been a good outlet for that.

1 Righteous Cause 1 Crown of Suspicion