these players are coming from Pod 1, it's hardly smiles all around. With both players having gone 0-2 so far this draft, it's time to see who's getting the label of biggest loser from the winner's table. Matt Abrams is a member of the Taking Back Sunday squad (see BDM's "Continental Drift" if that name's new to you). In addition to Abrams, that group also has Tim Aten and Adam Chambers at 8-3 and still looking to make the final day. Meanwhile, Craig Edwards is wearing the venerable colors of Your Move Games and looking to score another Sunday for the boys of the black and red. 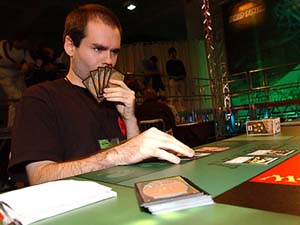 As is so often the tradition in the loser's bracket match, the shuffling period was filled with stories of how good their opponents' decks were. Both players commiserated over their various misfortunes, and then it was time to get down to business.

Abrams, on the draw, looked positively glum when he had to mulligan down to five cards, but a turn-three Kami of the Hunt followed by Kodama's Reach plus Frostling (and attack for four with the Kami) had him looking pretty good for such a low starting hand.

Edwards also had a reasonable start, with Shinen of Life's Roar and Orochi Sustainer, but he stalled at three land plus the Sustainer for a very long time, stuck with a hand of many uncastable double-red or five-casting-cost spells.

In the meantime, Abrams somehow seemed to have an endless supply of giant monsters to flood the table. Edwards, who became visibly more upset each turn he drew without finding that critical fifth mana, was able to deal with the first couple fatties, but ran out of answers well before Abrams ran out of questions. A few turns later he fell under an avalanche of Ogre Recluse, Vine Kami, and several other beefy beaters. 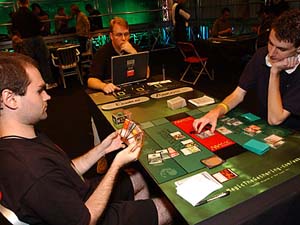 These two relatively unknown Americans were battling near the top of the leaderboard.

This time the shuffling period was filled with frustrated complaints from Edwards, clearly shaken at having lost to Abrams' double mulligan, an 0-2 draft made all the more frustrating by a problematic set of opening cards.

When Abrams claimed that his five-card hand only contained one land, Edwards was shocked, given how well his opponent had been able to smoothly ramp to six mana, casting massive beaters all along the way. I can't say for sure whether Abrams was telling the truth, but I can say for sure that Edwards looked even more upset after hearing this little piece of news.

Game 2 started much better for Edwards, who was able to use an Orochi Sustainer to accelerate out the dreaded turn four Sokenzan Spellblade. Abrams did his best to keep up, putting out Order of the Sacred Bell, and then what looked like a great answer, Harbinger of Spring, but the Harbinger turned out to be just as flammable as it looked, burning quickly to the ground under a Spiraling Embers. 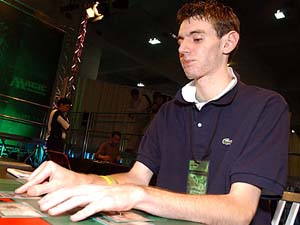 Abrams came back thanks to a Ronin Warclub.

Both players continued dropping monsters on the table, but the Spellblade was threatening close to lethal damage, and a Molting Skin to back it up was trouble for Abrams as well. Abrams put up an admirable defense of fat-based offense, but his position looked nearly unwinnable when Edwards played Shinen of Life's Roar, allowing him to swing in with the team next turn, regenerate his lure guy, and also pump it with Roar of Jukai to wipe out several blockers.

Abrams' forces were down to just two chunky beaters, Order of the Sacred Bell and Vine Kami. It really did look like Abrams was down for the count, but he had an answer to get through one more turn of lured beatings, playing Miren, the Moaning Well. He added a Ronin Warclub to the table for good measure, leaving just enough mana to sac his Order when Edwards swung in.

Edwards didn't have much choice. He had enough life to make it through one more attack with a little extra to spare, but if he swung in now he could force his opponent to sac one of the remaining two fatties instead. He took some time to weigh his options, bashed in, and Abrams stuffed his Order of the Sacred Bell into the Moaning Well, as expected.

What wasn't expected was the Shinen of Fury's Fire that Abrams dropped onto the table after he untapped. The hasty spirit joined its Vine Kami buddy, picked up the Ronin Warclub for free as a handy reward for joining the party, and the two came over to visit a stunned Edwards for lethal damage. And just like that, it was over.