Round 12: Too Much of a Master

"Die roll's pretty important in this matchup." Paul Rietzl said as he won the roll.

"Is it?" responded Brad Nelson, not looking anywhere in particular as he shuffled his deck.

"I don't know. Never played it. Just wanted to fill the space with something that sounded interesting."

Both players kept their opening hands. Paul led with a Steppe Lynx and a classy white-bordered Revised Plains. Nelson cracked a Misty Rainforest and put it immediately into his graveyard.

"Discarding?" Rietzl said with a smile.

"I'll be more careful next time. I promise."

Misty Rainforest fetched Murmuring Bosk, and Nelson revealed a Treefolk Harbinger. "I have a lot of options," he said. Eventually, Nelson opted to take a point of damage and lead with a Loam Lion.

Rietzl played an Arid Mesa and got in for 4 with the Lynx, bringing Nelson to 14. He followed up with a Figure of Destiny and passed the turn. 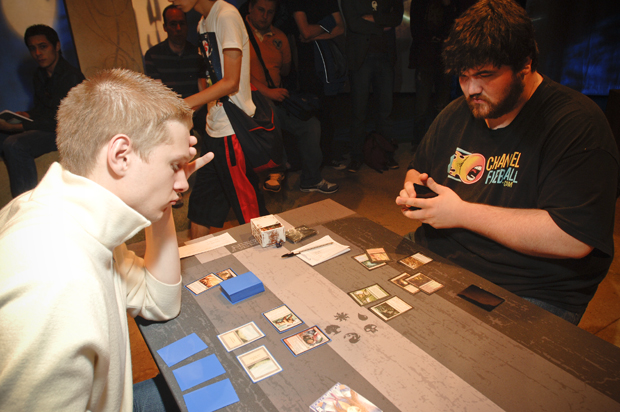 Paul Rietzl feels the heat of facing down Brad Nelson. (Also, it was very hot.)

Nelson's second turn, meanwhile, yielded a Duress on an Honor of the Pure as well as a Treefolk Harbinger fetching Nameless Inversion—a possible telegraph that Doran, the Siege Tower already sat in Nelson's hand. An attack by Loam Lion brought Rietzl to 17, and Nelson shipped the turn back after Rietzl made his Figure a 2/2.

Rietzl played a Marsh Flats and attacked. Treefolk Harbinger blocked Figure of Destiny, and Rietzl cracked the Flats to smash for 4 damage with the Lynx and grow Figure to 4/4. Harbinger hit the bin, and Nelson fell to 10. Another Rainforest from Nelson fetched a Murmuring Bosk, which he filtered through a Twilight Mire for two black mana. One of those mana went to a Thoughtseize, which took Ranger of Eos, and the other one, plus guest, fueled a Nameless Inversion on Steppe Lynx. An attack from Nelson put the life totals at 14-7 in Rietzl's favor.

Knight of the White Orchid came down for Rietzl, and Figure battled yet again. Nelson fell to 3. Doran finally came down to play defense, but Rietzl had a Brave the Elements to force his team through for lethal.

Both players kept their hands for this game as well. Nelson lead with a turn-one Misty Rainforest for a Murmuring Bosk, which revealed and cast Treefolk Harbinger. The Harbinger fetched up Doran, and Nelson passed the turn. Paul cast a Student of Warfare off a Flagstones of Trokair and passed it back.

On Nelson's second turn, another Treefolk Harbinger grabbed a Murmuring Bosk. Nelson played a Verdant Catacombs and had no other action. Rietzl cast a pair of Figure of Destinies, and Nelson decided that finally it was time for business. A second Bosk enabled Doran, and two Harbingers crashed in for 6.

Rietzl began to muster some aggression with an Honor of the Pure, leaving a mana open to grow a Figure of Destiny, but he couldn't afford to attack. He passed the turn back. 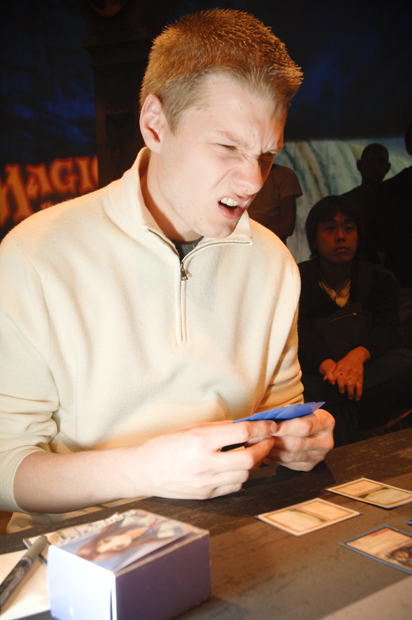 This does not look like the face of a winner.

"Wow," Nelson said after he drew his card, and began to ponder his attacks. Finally, he decided to play a Twilight Mire and cast Elspeth, Knight-Errant, which sent Doran into the air for 8. Life totals stood 15-6 in Nelson's favor after his attack.

On Paul's turn, he too decided to dive into the tank. Finally he elected to attack Elspeth with a single Figure of Destiny. Nelson blocked with a pair of Treefolk Harbingers, and one of them hit the bin. Paul followed up with an Arid Mesa and leveled Student of Warfare to two.

Nelson untapped, drew, and used Elspeth to pump Treefolk Harbinger. Harbinger got in there, and it was time for Game 3.

Both players kept their hands for game 3, and once again Rietzl came blazing out of the gates with a Steppe Lynx. Nelson thought for a long time before playing a Murmuring Bosk, revealing Treefolk Harbinger and casting Loam Lion. Rietzl attacked Steppe Lynx into Loam Lion after playing a Plains, and followed that up with a Figure of Destiny. Nelson played a Twilight Mire and a Putrid Leech, and Rietzl leveled Figure of Destiny after Loam Lion got in for two.

Honor of the Pure from Rietzl enabled an attack from Figure and Steppe Lynx, which was boosted by Rietzl's Plains. Nelson blocked Figure with Putrid Leech, and Rietzl cast Path to Exile on the Leech after Nelson pumped it. Life totals stood 18-14 in Rietzl's favor.

Nelson found Swamp off the Path and untapped. His Treefolk Harbinger summoned forth Nameless Inversion, and Knight of the Reliquary followed up the Harbinger. Loam Lion decided to play defense for a turn, and once again it was Rietzl's turn.

Paul played a Plains and attacked with Lynx and Figure, leaving mana up to level the Figure if necessary. Harbinger chumped Figure of Destiny, and Nelson fell to 10. Rietzl did indeed choose to pump up the Figure—on his turn and not on Nelson's—and afterwards he passed. 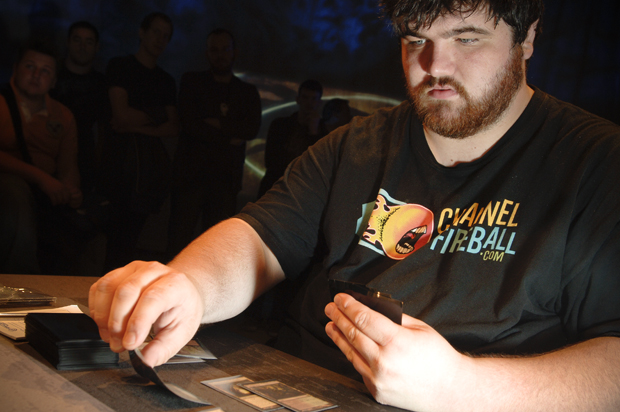 Nelson drew a card and whistled.

"I'm going to forget!" Paul exclaimed. "It's very easy for me to forget things!"

Paul had yet another Honor of the Pure on his turn.

Figure of Destiny got into the Red Zone, and Nelson weighed his options. He decided to activate Knight of the Reliquary, fetching Reflecting Pool, and cast Crib Swap on Figure.

"I guess you'll have to play your Brave, then," Nelson said. Paul did indeed cast Brave the Elements, and named white, and Nelson fell to 6.

Brad untapped and thought for a long time before attacking with Tarmogoyf, which brought Rietzl to 14. Nelson left five whole mana up (one of which was a Treetop Village) along with Loam Lion and Knight of the Reliquary, and passed the turn back.

Paul untapped and leveled Student of Warfare twice. Nelson attempted to Nameless Inversion it in response, and Paul allowed that to happen. A second Student of Warfare hit the battlefield, though, and Rietzl leveled it up to one. He passed the turn with his entire squad hanging back on defense. Nelson fell to 3 on Rietzl's end step when he sacrificed Misty Rainforest, fetching another Murmuring Bosk.

"You draw something good? It merited an 'Oh boy.' I haven't drawn an 'Oh boy' since ... yesterday," Rietzl mused.

Nelson cast Maelstrom Pulse on Figure of Destiny (passing up the admittedly juicy target of double Honor of the Pure), and turned his Tarmogoyf sideways. Rietzl took 5, falling to 3, and Nelson shipped it back.

"That's all I got," he continued. "Maelstrom Pulse would be yet another 'Oh boy' for you here, by the way."

Nelson simply used his Knight of the Reliquary to fetch a Murmuring Bosk, and Rietzl cut the deck.

"It feels like I just cut to Maelstrom Pulse, I swear," he said.

"No," Nelson said, and packed in his cards.

After the match, Rietzl discussed the turn he allowed Nelson to block with Putrid Leech before casting Path to Exile. He explained that the play was a semi-bluff, because some players would choose not to block fearing a trick, but in retrospect he wished he hadn't done it because it cost a point of damage.

"Some people wouldn't block," explained Rietzl, "and I really didn't want to cast Path to Exile there."

"I literally do not understand how someone, anyone on Earth, wouldn't immediately block in that situation."

"That's exactly my point," Rietzl said. "You're just too much of a master to even see the mistake!"