round saw the face off of two Japan's most popular pros. Tomoharu Saito has been tearing up the drafts all weekend, well known as the only player to achieve an 8-0 status. Opposing Saito this round is Japanese deck-innovator Takahiro Suzuki. Co-creator of the popular Ghazi-Glare and Solar Flare decks, this Tokyo University student has been proving his talent with the 40-card decks too. 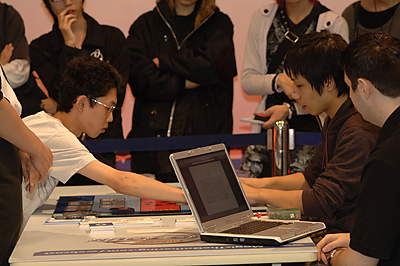 Suzuki started on the play with one of the defining cards of the format, Looter il-Kor. Since Saito's hand was set with creatures from turns three on, he decided to get a little mana efficiency and Snapback the Looter. All Suzuki could do was replay the Looter, stuck on the same two lands. Smelling blood, Saito made the rare turn-three Nantuko Shaman, hoping to get into beats before Suzuki could find his mana. This little plan ended rather poorly for Saito, as Suzuki attacked with the Looter and then madnessed out Nightshade Assassin to eliminate the 3/2. If that wasn't enough of a beating, post-discard shenanigans Suzuki played his missing land.

Saito wasn't done fighting just yet, although he certainly gave the appearance. After playing his fourth land, he mysteriously passed the turn back. Suzuki smelled the trap and merely attacked with the Looter. Sure enough, Saito cast a Crookclaw Transmuter at the end of Suzuki's turn, and attacked on his. Playing his fifth land, a third Island, Saito studied the board. With the fakest sigh this reporter has ever heard, Saito again passed the turn back. Again Suzuki sniffed out the bluff and chose not to attack with any of his ground creatures.

The Looter once again stung the opponent, by this point giving Suzuki a very saucy hand. Saito had another end step play, the almighty Teferi. Teferi looked like it gave Saito a lot of options with his mana, so Saito again played his land passed without a creature. This time Suzuki didn't give him the opportunity, as his Sudden Death killed Teferi without giving Saito any chance to flash something into play. 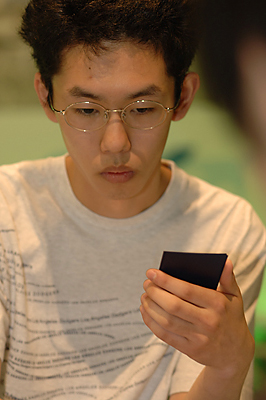 No longer afraid of any King Cheetah tricks, Suzuki attacked with all of his creatures for massive damage. Post-combat, Fledgling Mawcor took down the Transmuter and for a coup de grâce, Suzuki summoned Merieke Ri Berit. Merieke ended up dying to a Willbender-inspired Mawcor action, but Saito was still dearly on the ropes. A Phyrexian Totem from Suzuki promised even more damage. Careful Consideration gave Saito some cards to work with, but he was just too low in life to make them count.

Saito started off well in this round with a second-turn suspended Errant Ephemeron. Not wanting to be left out of the suspend party, Suzuki played his own, a Mindstab. Saito did his best to get cards out of his hand before the Mindstab clicked down, but his pair of Nantuko Shamans kept his hand full. Saito decided to play the aggressive role here, running his morph into Suzuki's. Saito lost his Willbender, a loss he felt acutely when Suzuki again played Merieke Ri Berit. The timeshifted legend stole Errant Ephemeron when it came into play, giving Suzuki the largest creature on the table. Yet despite Suzuki's multiple Looter attacks, he couldn't quite play enough creatures to be able to attack with the stolen 4/4.
The Mindstab plus a Psychotic Episode worked together to strip Saito's entire hand, including one of his best cards in Squall Line. A Teferi off the top for Saito gave him some flexible tools to work with, followed by Durkwood Baloth. The Baloth came through unopposed, much to Saito's pleasure. Suzuki's Looter kept attacking, eventually finding a Star which was blind-sacrificed, incredibly, into Dark Withering. While I'm sure Suzuki would have loved to madness the Withering, Teferi made that option impossible. The hardcast Dark Withering did take care of the Baloth problem, and the red zone again stayed static save for the little Looter pecking away.

Saito decided to use the lull to draw and play an incredible four creatures in a row. Suzuki, despite looking at twice the cards of his opponent, could only play lands and a single Phyrexian Totem. Saito drew his next card and studied the board. After a long deliberation and many math scribbles, he attacked with everything. Suzuki studied the board for a very long time, before finally asking if he could move to the blocking step. This turned out be a key error for Suzuki. By asking if he could block, he had given up his opportunity to active his Phyrexian Totem. 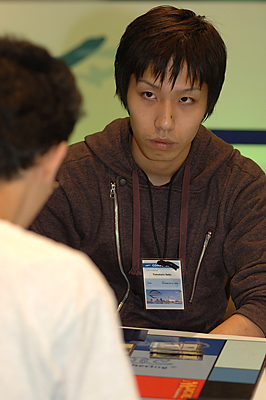 Short a blocker, Suzuki made the best blocks he could, with the turncoat Errant Ephemeron on Teferi. Before damage, Saito played another creature he had drawn. The Crookclaw Transmuter turned the Mage of Zhalfir into a 4/3; big enough to take down Errant Ephemeron. The attack also did heavy damage to Suzuki, who was clearly on the ropes and kicking himself over his vocal snafu. He tried to make a game of it with Momentary Blink / Merieke Ri Berit tricks, but was just a touch too low on life to stabilize. After a very long game, Suzuki threw in the towel.

Game 3 never happened, as the competitors decided to call a truce. With five minutes left in the round, the two players took the intentional draw and went to refresh themselves before beginning the final draft of the day.