Round 12: Tsuyoshi Douyama vs. Masahiko Morita 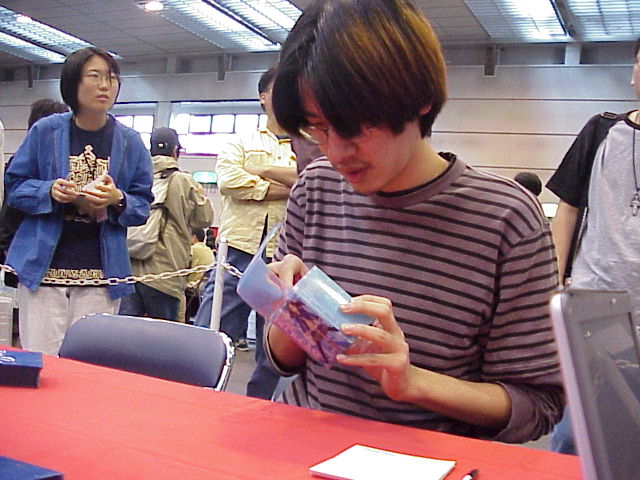 Nothing spells trouble like teammates forced to play one another. Particularly when they're as strong as these two. Tsuyoshi Douyama is last year's National Champion, and both he and Masahiko Morita appeared in the Top 4 teams of Grand Prix Yokohama, albeit separately. Morita was with Poor Shark, and Douyama ran with Voice of Soul. In fact, the list of Morita's Top 8's is extensive.

Douyama had a fast start of Dwarven Grunt followed by a Minotaur Explorer that cost him a mountain. Morita had meanwhile made a Diligent Farmhand that stepped in the way to search out a third land. He untapped and played another, along with a Druid Lyrist.

Douyama threw caution to the wind and sent his troops. Muscle Burst took down the Explorer. Douyama tried to get in the game with Bomb Squad, but Firebolt took care of it, and Centaur Archer hit the table. Douyama answered with Thermal Blast, then untapped and swung with a freshly-cast Pardic Firecat.

Morita calmly tapped five and played Beast Attack. He untapped and made another. On the next attack, Douyama let them both by, and Rites of Initiation for three ended the game. 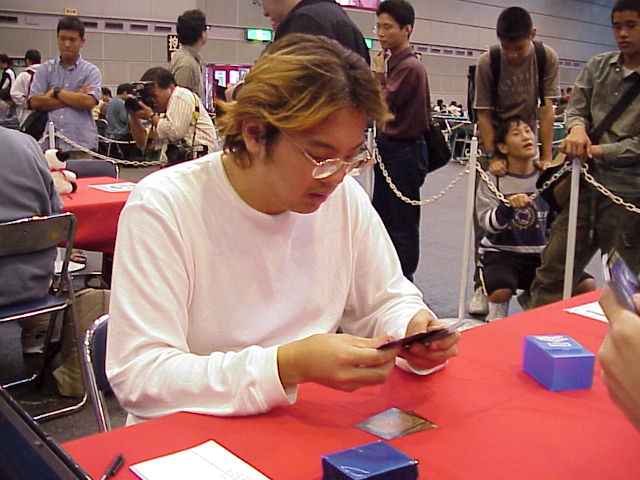 Game two was just as vicious. Morita led with Dwarven Grunt and Krosan Avenger. Douyama made way for his Fledgling imp with Firebolt. Morita's Springing Tiger posed a more significant problem. Douyama made Barbarian Lunatic and flew over for two damage.

Morita's Grunt continued to perform. Between it and the Springing Tiger he had savaged Douyama's life total. It was looking grim.

Then Douyama played the biggest elbow in town, Kamahl, Pit Fighter. The walking shotgun deep-sixed the Tiger, and Douyama ended his turn. Morita fought to stay in it with Beast Attack. He untapped, and did not play an answer for Kamahl.

Morita swung with the token and Grunt, putting Douyama at eight. Douyama untapped and held everything back. Now the Beasts charged the Red Zone. Lunatic and Imp blocked, and the Lunatic took one down. Kamahl went to finish the other, but it was saved by Muscle Burst.

Now Douyama decided to blow up the Archer with the Pit Fighter, and reuse Firebolt to take down the Grunt, accepting the fact that he would fall to four. Morita obliged, then summoned a 6/6 Ivy Elemental. Douyama held back again, this time ready with Thermal Blast. It didn't matter. Demoralize gave the win to Morita.