Round 12: Tsuyoshi Ikeda vs. Masashiro Kuroda 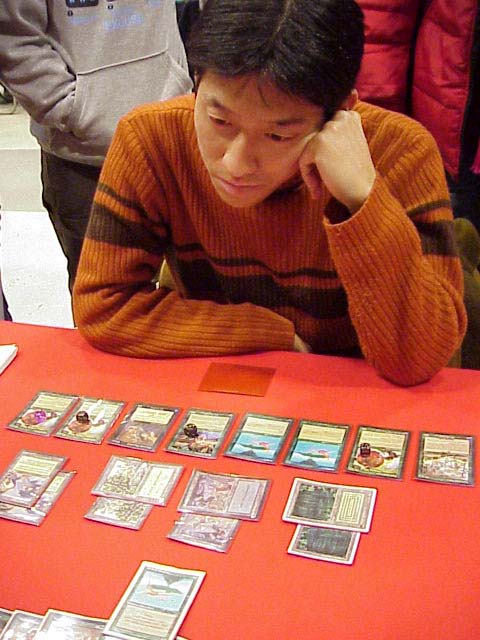 This round saw regular Japanese Sideboard feature contributor Masashiro Kuroda square off against a fixture in the coverage, Tsuyoshi Ikeda of the top team Fire Beat in a mirror-match most dire. As far as mirror-matches go, the green-black mirror is one of the worst. The presence of Spike Weaver and the nigh-impossible to kill Spiritmonger makes for some ugly stagnation.

Ikeda's draw was slow for the first game. He had only a Treetop Village and Birds of Paradise. Kuroda's was equally sluggish. Ikeda Duressed on the third turn and caught a Pernicious Deed, seeing another and a Spiritmonger that Kuroda couldn't cast, as well as a Weaver.

Ikeda dropped another Bird, and finally busted out a Yavimaya Elder. His mana issues seemed to be behind him. Kuroda peeled Bayou, dropped Deed and popped it for one, leaving Ikeda with just Villages and the lands his Elder could serve. He needed time to hit five mana and match Kuroda's incoming Spiritmonger.

Kuroda didn't see any reason to grant him that time. The 'Monger hit the table. Ikeda thought hard. He could tap out for Weaver, but the resulting smash would put him to one. He chose to keep Kuroda's Treetop Villages at bay with Pernicious Deed. Kuroda hit him for eight and dropped Dust Bowl. Ikeda was left with three lands.

Ikeda refused to give up. A fourth land gave him Wall of Roots and Yavimaya Elder, stopping yet another of Kuroda's attacks, and giving him valuable mana. Next up was Spike Weaver. Ikeda was stable at five life. Kuroda didn't have anything to add to the situation. He watched as Ikeda played a Spiritmonger of his own. Kuroda made a Weaver, and it was a stalemate.

For a few turns, nothing happened. Then a Duress from Ikeda forced Kuroda to use his Vampiric Tutor. He got a Phyrexian Plaguelord, which convinced Ikeda to blow up the world with his Deed. All that was left were the two Spiritmongers.

Ikeda, however, was prepared for this eventuality. He had a second 'Monger in hand. They had to stay on defense because of Kuroda's Villages. Kuroda decided to go to the air with a Birds of Paradise powered by Spike Feeder, but Ikeda had topdecked Vampiric Tutor, and used it to fetch Recurring Nightmare.

Oh no, indeed. Now he could cycle a Spike Feeder for two life a turn, AND have a Weaver in play for Kuroda's turn. Faced with a losing proposition, Kuroda made his last gasp: Living Death. Creatures swarmed in on each side. It still looked bad. It looked worse when Ikeda topdecked a Plaguelord of his own. He had spent his turns Dustbowling away Kuroda's Villages, edging where he could. He'd even searched out all the basic lands from his deck with Yavimaya Elders.

Finally, Kuroda found a Pernicious Deed to break things wide open. It stayed on the table for a turn. Kuroda needed every last mana to wreck the board. However, Ikeda's habitual use of the Recurring Nightmare caught up with him. He had been wisely leaving it in play to protect against Duress, but he left it on table again after the Deed was in play. Kuroda blew everything up, and the twin Plaguelords left nothing in their wake. 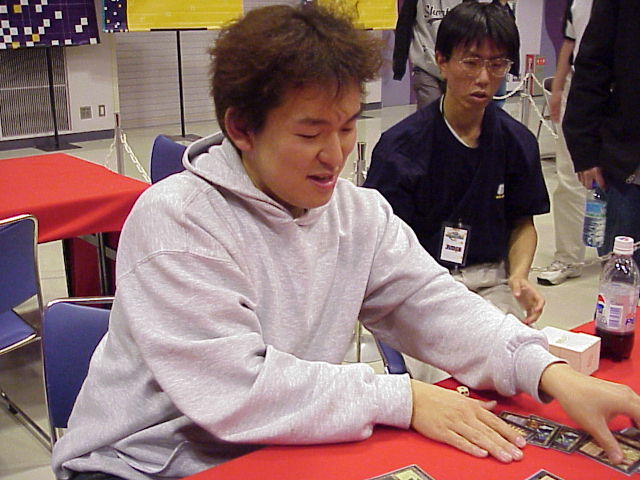 Ikeda had gained plenty of breathing room from all that Feeder nonsense, but he was still shocked when Kuroda dropped a Spiritmonger. He needed a big draw, and fast. He slammed his deck. His card-for-card copy of Mike Pustilnik's Vegas deck offered up the lone maindeck Choke. Ikeda managed to laugh at his ill-fortune.

Another hit left him at eleven. This time, his deck was kind, giving him a Phyrexian Furnace that took Kuroda's Plaguelord and cycled into the incredible Volrath's Stronghold. Now he had access to plenty of tools. Weaver, then Spiritmonger, with two more waiting in the graveyard.

Kuroda managed to find a Masticore. It locked him with just one card in hand, but his ample mana could shoot down any Weavers and hold the ground. Ikeda was so worried that he decided to skip getting more Spiritmongers and hope for the best. He slammed his deck. It gave him Living Death.

Once again the board was filled with dudes. This time, though, Ikeda was the only one with a Plaguelord. He savaged Kuroda's board, but couldn't eat through the Spiritmongers. Time was winding down. The two players stared at each other. Finally, Ikeda got a Vampiric Tutor to fetch a Pernicious Deed. Unfortunately, the multiple Deaths left Kuroda at a healthy 36. One swing wouldn't do it.

And so, they drew and passed turns, without much action. Ikeda whittled at Kuroda's board, but couldn't do anything fast. Time was called, and neither player could win in extra turns. And so the great Rock and His Millions mirror was a draw.