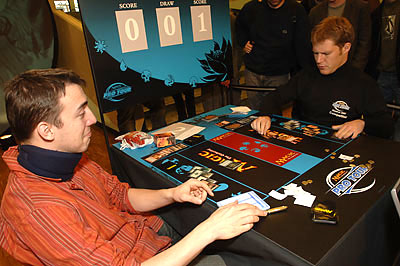 Olivier Ruel and Ben Rubin in a PT New Orleans grudge match… of sorts.ith just one more draft to go after this match, Olivier Ruel is currently at 9-3, while his opponent Ben Rubin is just a draw behind at 8-3-1. These players haven't faced each other yet this weekend, and in fact it turns out they haven't played each other since all the way back to Pro Tour - New Orleans, where they were matched up in the first round and ended up with a draw. Olivier quipped that it was the only point he got that weekend, his deck was so bad, drawing a laugh from Ben and the crowd.

With both players keeping their opening hands, Olivier started the action with a Wormwood Dryad. Rubin kicked off his line-up on the third turn as well, playing out a morph creature. Uktabi Drake and Icatian Crier came next, dropping Rubin to a quick 15. Fidgeting with the Crier a bit, Olivier joked, "That's the best part of playing three colors. You can play only the bombs." Rubin chuckled, adding a 3/3 Primal Plasma to his board, and passed the turn back.

At this point the Wormwood Dryad and morph traded (it was a Riptide Pilferer). Ruel added Amrou Scout to his board, but made quite a face when Rubin tapped five mana and pointed a Conflagrate at his Amrou Scout and Uktabi Drake. In came the Plasma, and Rubin passed the turn, but Ruel passed it right back, though now having two more guys thanks to the Crier. Rubin had another big one next turn, dropping out Coal Stoker and four Goblins thanks to a stormed Empty the Warrens. 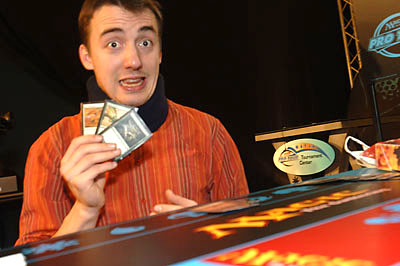 From here Ruel seemed to draw almost nothing but lands for several turns. Ruel slowed the damage with a Fiery Justice, and it shows how far behind he was that the bomb wasn't enough to get him back in the game. Rubin added a hard-cast Ephemeron to the table. On the final turn Rubin came in for 6 points in the air with a Spiketail Drakeling and the Ephemeron, and then flashed back his Conflagrate to deal the final point of damage.

Peeling the final card of his opening hand very slowly, Ruel quipped "I hope this last card isn't the land I need or I may be tempted to keep it!" Lightning Axe, Fiery Justice, and 4 non-Mountain lands got joined by a Plains, and Ruel was able to ship the hand back for a six-card version that stuck.

This time it was Amrou Scout for Ruel versus a suspended Ephemeron for Rubin. Ruel followed up with Wormwood Dryad, but his Scout then went down to Conflagrate. Ruel replaced it with a Zealot il-Vec, but given Rubin's slightly mana-heavy draw he was happy to toss two Islands to flash back the Conflagrate and send both Ruel's remaining creatures to the dumper.

Worse, Ruel was stuck on three lands, and had a Rebuff the Wicked in his hand that he couldn't cast because he didn't have any mana. Next turn the best he could do was Rift Bolt a new morph, which turned out to be more important than it may have looked since it was the Riptide Pilferer again. But, now the Ephemeron was in. Revered Dead looked like a pretty embarrassing answer, and didn't look any better when Rubin's Subterranean Shambler killed it on the spot - though at least Ruel now had a Lightning Axe for the fat flier. Still stuck on three land, he again had to pass the turn while Rubin paid the echo on his Shambler facing absolutely zero pressure. Swinging in with it, he took Ruel to 10 and passed the turn. 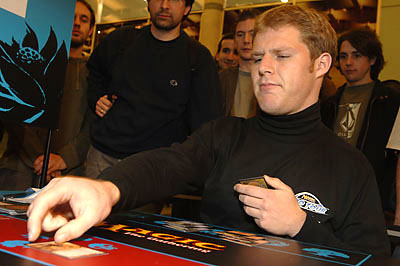 At last finding a fourth mana, unfortunately the best Ruel could do was play a Scarwood Treefolk, at a time when he pretty badly needed a blocker. The Shambler dropped him to 8, and then things became much more dire when Rubin added a Reckless Wurm to his side of the table. Unfortunately for Ruel the best he had was an Uktabi Drake, which he just sent in, dropping Rubin to 13. In came the American's team. The tree blocked the Wurm, and Rubin shut the door with a brand new Conflagrate from his hand, the third time he'd cast that spell this game. Down went the Drake and the Wurm. With a Dust Elemental in hand, not enough white in play, and nothing else, things couldn't have looked a whole lot worse for the Frenchman.

Ruel quickly drew up his next card, which turned out to be a Flowstone Channeler, and just as quickly extended the hand to concede the game when Rubin turned his creatures sideways for the killing blow. A tough match and an exceptionally unfortunate mulligan, but overall Ruel was happy to have managed a 2-1 with the deck given the mistakes he felt he'd made early in the draft.

And that's how Ben Rubin continued to stay in the hunt for Top 8 with one draft to go. If you haven't read the crazy story of what he went through to get here, go read this right now. Stay tuned from here and see how it turns out!