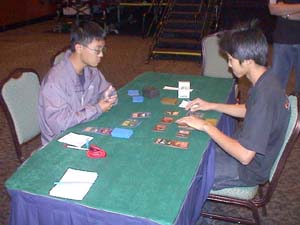 In this round, rising Thai star Veerapat Sirilertvorakul squared off against Singapore's Bernard Mok. The disparity in the size of their last names only added to the rivalry. Sirilertvorakul tore up Day 1 with the sickest sealed deck ever, and has since stayed at the top of the standings. Mok, on the other hand, has had to fight his way up from twenty-seventh.

The Chainflinger did its job and got Thermal Blasted in return. Sirilertvorakul was holding the brutal Last Rites - Violent Eruption combo, but didn't want to wait on Mok's terrible draw. He used the Rites for one, stripping Gorilla Titan. His Pardic Lancer was answered by an emergency Crippling Fatigue on Mok's side.

Still, Sirilertvorakul was way out in front. He Butchered the Barbarian and made a Frightcrawler. Mok could only manage Rotting Giant, and it was far too late. Violent Eruption finished his blocker, and thus, him.

Mok chose to draw in the second game, and he answered Barbarian Lunatic with Flame Burst. However, his three-land hand failed to find a fourth, so Sirilertvorakul was free to get in with Whispering Shade and Pardic Lancer.

Mok tried a Halberdier. Sirilertvorakul was kind enough not to laugh. He Demised it, and brought in Hell-Bent Raider, hitting for seven. Mok had another Flame Burst for the Shade, and Werebear, but Sirilertvorakul had Firebolt and a replacement Shade. It only took one more attack.