Round 12: Vincent Boulanger vs. Jeff Fung 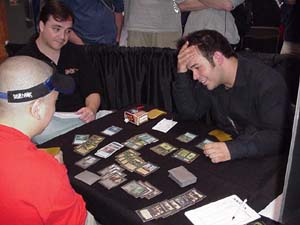 Jeff Fung is one of the most colorful and popular personalities at this event but the crowd along the rail was pulling for hometown hero Vincent Boulanger. They were hoping he would be the second Quebecer to get the opportunity to play on Sunday. Jeff and Vince are old friends although they have never played each other in a tournament before. "Except in some money drafts," Fung added.

"This is only my second ever feature match. So you may have the advantage over me," said the Quebecer.

Both players kept their opening hands and Vince thought about a turn two Mongrel but opted for Aquamoeba instead. Jeff had the Smother and used it on his own turn before Logic mana was showing. Wild Mongrel replaced the blue beast but it fell victim to Innocent Blood but not before depositing a Roar of the Wurm in the bin.

When Vince played his Roar he represented the token with a pen cap, which seemed to distract Jeff. He asked a judge if his opponent could use the removed from game card to represent the token and the judge agreed that he could. After this matter was finally settled Jeff said, "Smother your Roar of the Wurm...just kidding!" He did Diabolic Tutor for Smother on the fourth turn—he was holding Coffers and Visara—but he would have to take 6 from the token. Vince used Deep Analysis and played a Rootwalla. When Jeff played the Coffers and the Visara next turn Vince wanted to know, "That was your choice, right?" Jeff just smirked confidently.

Vince was holding the Unsummon off of the draw and was not worried about the pitfighter. After flashing back Deep Analysis, he sent the gorgon back to Jeff's hand and swung in for seven—exactly half of Jeff's life total. Wild Mongrel joined the party.

Jeff had some decisions to make. He cast Diabolic Tutor for another Cabal Coffers thought some more before playing it. Vincent was startled by the silence. "You are awfully quiet Jeff."

"I am only loud and obnoxious when I am winning. You'll KNOW when I'm winning. I'm not winning this one though, am I?" Jeff played the Coffers and made another four mana with it. "Do you really need that much mana?"

"Do you really need that much power?" To illustrate his point Jeff Smothered both the Roar and the Mongrel and passed the turn back to Vince who uttered an honest to goodness, "Sacré bleu!"

Vincent kept the pressure on with a Quiet Speculation for Deep Analysis and Roar of the Wurm. He made another 6/6 token and swung in or one with the 'walla. The lizard was Corrupted for four and Innocent Blood dealt with the remaining Roar token.

Vince was running low on pressure but he was holding two Looters after flashing back Deep Analysis and played them both. With the pressure off for the moment, Jeff decided to cast Haunting Echoes over Visara and dissected Vince's deck. All of Vince's Mongrels, 'Moebas, Rootwallas, and Unsummons were removed from the game. 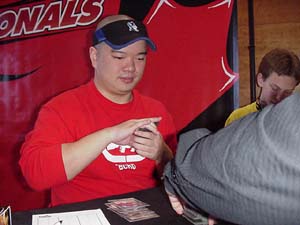 Holy Boulanger! Vince drew a Phantom Centaur off of the top and looted into another one. He played them both and Jeff's draw just about hit the table, "You have got to be kidding me!"

"It is actually your fault that I drew them..."

"I thought about leaving the Rootwallas in," agreed Jeff.

Jeff had one turn to rip a Mutilate and he failed to do so.

While the players shuffled for Game 2, Vince asked if he could thank his place of work—Unicour Assurances—for letting him take off this weekend and following his progress on the Sideboard. "It's a great place to buy insurance too, added Jeff with a wink. "I'd like to say hi to all my friends I play Warcraft III with—Gary, John, and Elaine. And my Mom!"

His good cheer was short lived, as his third turn land drop was a Cabal Coffers. He missed his next land drop and made a boo-boo face as he passed the turn back to Vince. The Quebecer was also out of land but he had a ladder to climb out of his hole with—Compost. "I might have a response to that... What does Compost say in French? I'll tell you, it translates to 'I am a lucky Frenchie!'" Jeff Smothered the Rootwalla in response. 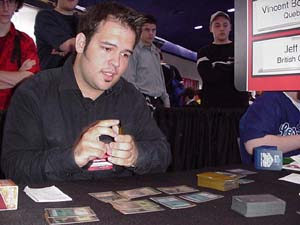 A third Swamp allowed Jeff to Diabolic Tutor for another Swamp. Vince drew a card. "I hate that card! Is it reprinted in 8th—I hate it!" Vince was still without land number four and played another Rootwalla. On the next turn a Cabal Therapy was countered—or should I say Dismissed. When his Corrupt was countered on the next turn—again drawing Vince a card—Jeff shouted over to Ryan Fuller, "We're PTQing tomorrow, so make sure you wake up!"

Jeff's back was against the wall but he maintained good humor throughout. He drew a big laugh from the crowd when he shouted loud enough for Head Judge Marc Hernandez to hear, "For the last time, Vince. I will not accept $50 to concede to you!"

When his Visara was Unsummoned and Vince played a Phantom Centaur, Jeff reached over to adjust the game totals to reflect that Vince had won but decided to draw one more card in hopes of a miracle. "What have we got here? How about I cast Haunting Echoes on myself?"

Jeff jumped up out of his seat and offered his hand, "For the love of God, Vince! It means I concede! Congratulations."