Round 12: Watch Those Mana Curves 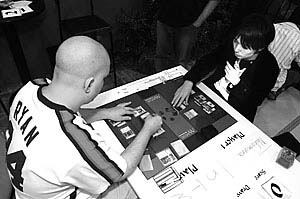 highly anticipated U.S. Team has had quite a ride so far at this year's World Championships. They started off with an embarrassing 0-3 first round, but then went on to post a phenomenal 12-3 to finish out Thursday. Neil Reeves has been leading the charge with 5-0 performance in draft going into the final round of a day that has seen the U.S. go from fourth place to a commanding first (with breathing space).

Shuhei Nakamura was playing Golgari with a white splash in Thursday's final match, and started off nicely despite a mulligan, playing Transluminant followed by Civic Wayfinder. Reeves' Boros deck answered with his own curved-out draw, playing a Thundersong Trumpeter followed by a Courier Hawk. The Japanese player made things difficult next turn, playing a Strands of Undeath on his Wayfinder, sending a Boros Fury Shield and Dogpile to the American's graveyard. Reeves played a Screeching Griffon, Nakamura played Root-Kin Ally, and the race was on.

The problem for Nakamura was that he was way behind on tempo against the aggressive Boros archetype, losing a turn casting the Strands, the same for a Bottled Cloister next turn, as well as losing a tempo step from the Root-Kin Ally being kept off attacking by the much cheaper Trumpeter. Reeves added another Screeching Griffin to his air force, and the Japanese player was just too far behind on life and development. Reeves flashed him a Rally the Righteous and the Japanese player quickly scooped up his cards.

Nakamura spent a very long time agonizing over whether to keep his opener for this one. Reeves baited him repeatedly, trying to put him on different hands, eventually deciding he must have two Swamps and no Forests. 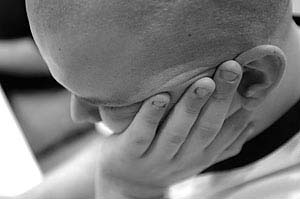 Reeves couldn't settle on an answer for Guardian of Vitu-Ghazi.

Reeves had Trumpeter on turn two again, followed by Veteran Armorer, but Nakamura had a Vinelasher Kudzu followed by a Nullmage Shepherd by turn four. On his own fourth turn, it was Neil's turn to ruminate, deciding to go with Faith's Fetters on the Nullmage plus a swing for four.

Vinelasher continued to grow (joined by a Mortipede), and a gigantic Guardian of Vitu-Ghazi made Neil's life a lot more difficult.

"Not what I thought you were going to play," he said. Then, more to himself, "Thought it was a Siege Wurm. That guy's too big."

With a hand of Flame-Kin Zealot and Fiery Conclusion (and six mana in play, but only double red), Reeves would have been much happier seeing the five-toughness wurm, particularly as he'd taken the hit from the now 5/5 Vinelasher hoping to go in for the kill.

And then Savra joined the party too. Next turn, Mortipede, the Guardian, and Savra came over, combat tricks fired on both sides of the table, and when the smoke cleared it was Mortipede, Guardian, and a 7/7 Vinelasher against a lonely (and probably nervous) Trumpeter. One more attack and it was the American's turn to scoop up his cards. 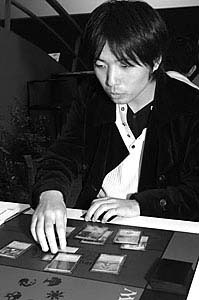 Nakamura had more than enough gas in Game 3.

Neil shook his head ruefully. "I could have put him on 3 life that time. Being dead is the suck."

Opening up a hand with Boros Fury Shield, Galvanic Arc, and a bunch of land, Neil sent it back. He peeked at the next few cards, verifying he would have whiffed for early creatures. "Whew! Smart man."

Reeves ended up with a great-looking turn-two Armorer that turned into a feeble every-turn after that, as he stalled on three plains with a fistful of red spells and griffins. Monsters came out on the Japanese player's side starting at turn two. I would tell you what they were, but by the time I finished writing the last couple sentences it was already over. I think I saw a Transluminant and a Civic Wayfinder, but it was heard to tell after that.

Reeves took one last draw to see if land number four had found its way to the top, but it was yet another red spell and that was that and he fell beneath a crush of curved-out beaters.