Pelcak is a member of Taking Back Sunday and one of the leaders of a group of bearl-y Minnesota players that includes Gerry Thompson and what I'm told are hundreds, or perhaps thousands, of barns. He made his first break into stardom as one of Tim Aten's "children" on :B, the team that finished 7th at Pro Tour-Seattle and who later won Grand Prix-Chicago. Pelcak also has posted a string of Grand Prix Top 16 finishes, but has yet to make a solo appearance in a Top 8. 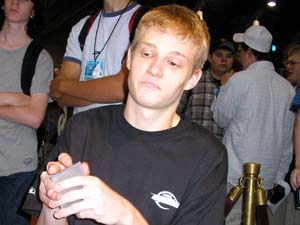 John Pelcak was one of many players running Tooth and Nail

Sitting across from him is the legendary (and newly svelte) Morgan Douglass. Douglass is positively infamous on Magic Online for various things, perhaps the greatest of which is that he is the pioneer of the losing "disconnect." He's also a feared Mid-Atlantic PTQ player who would probably be a much bigger name in the community if he could just be bothered to travel more often.

He's also slowly making a name for himself as a deck designer. The blue-white Mind's Desire decks from last season's Extended PTQs were a direct descendant of Morgan's Pro Tour-Columbus design, and Morgan was also the innovator behind the blue-white ninja beats deck that he and Gabriel Nassif played at Pro Tour-Philadelphia.

"You're playing, right?" asked Pelcak. Douglass nodded his head in the affirmative. "Yeah, I'll keep then."

"Got a hot one there, eh?" poked Douglass.

Douglass got the beats in right on time, playing a Suntail Hawk on turn one and Leonin Skyhunter on turn two. The flying army grew on turn three with two Lantern Kamis to Pelcak's two Vine Trellis and Sakura-Tribe Elder.

"One time, dealer!" Morgan said as he drew his card. It again failed to be a land, and Morgan said, "God, I'm so committing suicide," displaying one of his characteristic quirks of personality as he dropped Pelcak to five, but braced himself for a possible entwined Tooth and Nail. If he'd drawn a land to cast the Glorious Anthem in his hand, the game would have been over then and there.

"Come on Top Deck!" yelled Pelcak this time, also failing to draw a land, though he did cast an un-entwined Tooth and Nail to toss Mephidross Vampire and Viridian Shaman onto the board. Douglass's next attack dropped Pelcak to one, and the lack of a Triskelion on the next draw meant Morgan was up 1-0.

Douglass again had the early beaters in Game 2 and combined them with three lands and a Glorious Anthem this time around. Pelcak had a better start to his game plan, playing a turn-one Sensei's Divining Top and Sakura-Tribe Elder, plus the full Urzatron on turn four and an Umezawa's Jitte - a last-second inclusion in Pelcak's sideboard.

Douglass's next turn brought a Lantern Kami and Jinxed Choker into play, but Pelcak had the trump there, using a Viridian Shaman to destroy the dangerous jewelry before it became too problematic. After two attacks from the Jitte-bearing Elder, there were four counters on the equipment and Pelcak chose to use three of them to kill of the Skyhunter. This left him wide open for Hokori, Dust Drinker from Douglass while sitting at a very precarious four life. The Jitte took down one flier on the next turn as Pelcak dropped to two and then Creeping Mold whacked Glorious Anthem, making the Jitte twice as effective and swinging the game firmly in Pelcak's favor. 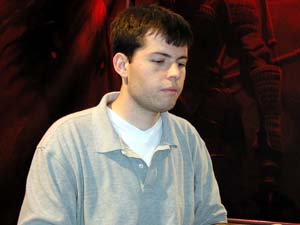 Douglass could now feel the game slipping away. He got Pelcak to two, but now had to find a way to make it past two creatures and an active Jitte with only Hokori and a Suntail Hawk on the board. His next attack dropped Pelcak to one, but the Jitte meant that one was really seven, and Morgan Wrathed the board away, hoping to draw more gas while Pelcak flooded on lands. Since Pelcak had a ton of mana available, even Jinxed Choker wouldn't be enough, nor would a Shining Shoal, as John just built up counters on the Jitte so that he could use it for whatever he needed.

Another Sakura-Tribe Elder from the Minnesotan meant he still had a effective threat on the board, and while the turns continued, everyone in the feature match area knew Morgan was a dead man walking, conceding the game six turns down the line.

Morgan had the stone cold nuts on the play in Game 3 and demolished Pelcak before he even had a chance, casting Isamaru, Leonin Skyhunter, Lantern Kami, Raise the Alarm, and Glorious Anthem.

"I peeled the Anthem and I was just like, 'Wooooow.' I had the actual nuts in that game - can't get any better."