Round 12: William Jensen vs. Tom Guevin 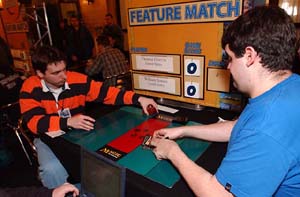 It was two of New England's best squaring off with Top 8 on the line in the round 12 feature match between Billy Jensen and Tom Guevin. These two go way back and it was "Tight Tommy" Guevin who gave Jensen the nickname "Baby Huey." Both players were 8-2-1 when the match started, meaning that the winner would need to win just one of his next two matches in order to advance to Sunday. The loser, meanwhile, would still have a shot, but would need to win out and hope his tiebreakers were good enough.

Guevin has a reputation for talking a lot of trash, trying to intimidate or confuse his opponents with his hijinks. He's rarely mean-spirited, though. Instead he's usually just trying to put on a show and his ability to entertain the crowd has made him a favorite in the feature ematch area for years. This time, however, Guevin was all business. He hasn't made the Top 8 since Pro Tour #2 way back in 1996 and he asked Huey if they could just play and not talk. Huey smiled at him, but then agreed.

Guevin is running Team Your Move Games's goblin deck. No one else on the team is running it, but they tuned up a good one while they were testing against it. Guevin didn't believe in the team's Dragon deck, he didn't want to play Slide because it just loses to Beasts-Bidding, and he kept watching the goblin deck destroy Bidding with it's main deck Goblin Sharpshooter technology. So he decided to run the goblin deck. Jensen, meanwhile, is running the green-white fatty deck designed by Brian Kibler. Wirewood Elf and Explosive Vegetation allow him to get Silvos or Akroma into play remarkably quickly. 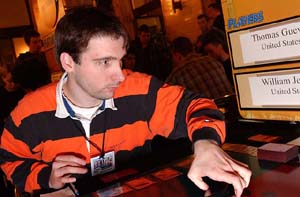 Jensen started building his mana right away in game 1 with an Elf and "vegetables." Guevin then showed off some of his deck's versatility when Skirk Prospecter fired up Goblin Sharpshooter, allowing it to gun down a Wirewood Elf and providing the mana for Clickslither. However, Jensen had the Vengeance he needed to sweep away all three of Guevin's creatures. Jensen then dropped a Ravenous Baloth and one turn later, Akroma, Angel of Wrath hit the table and started serving. There's really not a whole lot mono-red can do on either offense or defense against Akroma. Three turns later, Guevin was dead.

Huey had two Walls of Mulch defending him at the beginning of game 2, but Guevin got Sparksmith and two Goblin Sharpshooters on line, more than enough to shoot down the walls and clear a path for his Piledriver. Huey, however, had a pretty good answer for all that damage: Gigapede. The untargetable insect was going to be available to block whether Guevin blocked or not. Guevin didn't seem to care much and he started doing some math on a piece of scrap paper. Guevin then played a Skirk Prospecter, which would allow him to go nuts with his two Sharpshooters. He sacrificed two goblins so he could shoot four times and also get enough mana for a Clickslither. He then sent his whole team into the red zone. When the dust finally settled, Clickslither was 7/7 and the Sharpshooters did three more damage each, all of which added up exactly perfectly to put Huey at 0. 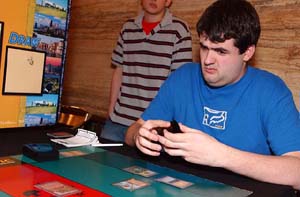 Game 3 was a pure race. Normally, that would favor the goblin deck, but racing is Exalted Angel's specialty. Guevin didn't get off to a particularly fast start, and he spent his third turn using Goblin Burrows plus Goblin Grappler to provoke and trade with a threatening looking morph that turned out to be just a Broodhatch Nantuko. By the time Goblin Goon and Clickslither came out to play, Huey had already flipped over his second morph, which really was an Angel, and now he could spend his mana playing Pacifisms to slow down Guevin's counter-attack. Guevin did come up with an Angel answer, but he had to sacrifice his entire team in order for Goblin Sharpshooter to gun her down. It took a while for Huey to win once his Angel was dead – Guevin found the goblins he needed to take down a pair of Ravenous Baloths, but those Baloths gave Huey plenty of life and then Gigapede delivered the fatal blow.