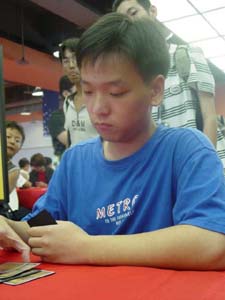 Still more All-Taiwan Action, as the best locals step up to the challenge. This round sees Yue-Wei Yang square off against Bruce Pai. Pai is running a Green-White-Black goodstuff deck, while Yang is with a red-green burn-heavy deck. He's made the most of his single bye, fighting through to within striking distance of the Top 8.

Both players sent back their initial hands. Yang drew up a six with Wild Mongrel and Blurred Mongoose, but just one land. He couldn't say no. He paid dearly. He had just a Rootwalla and forest in play on turn three. Pai showed him Vindicate.

His discards went Flametongue, Urza's Rage, while Pai put Call tokens and Anurid Brushhopper into play. It was over within moments.

Yang allowed himself a glance at his next few cards. There wasn't a land in the first seven. 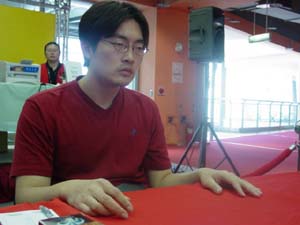 Yang started out with Grim Lavamancer and watched as Pai played out City of Brass and Bird of Paradise, then answered his Blurred Mongoose with Caves of Koilos and Anurid Brushhopper. Yang had two Fiery Tempers in hand. He could kill the Birds, sabotaging Pai's pain-free mana. Instead he held back, trading his Temper and Mongoose for Pai's pitches of Glory and Wild Mongrel.

Ah Glory, what a beating. Pai developed his mana further with Llanowar Elves and added a Wild Mongrel to the mix. Yang made a Mongrel and pitched Fiery Temper to kill Pai's. His Lavamancer took out the Birds. Still, he was losing ground.

None came. He tried to block, and blunt the assault, but Glory made that impossible. Another Phantom Centaur got in on the action. Ensnaring Bridge was not the top card, giving the match to Pai