Round 12: Zvi Mowshowitz vs. Sylvain Lauriol 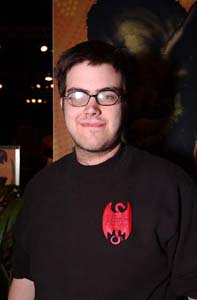 Lauriol is the current French National Champion, and his team is in the running for Sunday. In his way is Pro Tour mainstay Zvi Mowshowitz. Unfortunately, Lauriol's deck is four colors, and so far it has brought him to a 0-2 record.

Mowshowitz won the die roll, but let Lauriol play first since Lauriol had a four color deck. Creatures came out fast, as Mowshowitz curved up with Benevolent Bodyguard and Phantom Nomad, while Lauriol had Harvester Druid. He then cast Far Wanderings, which got some trash talk out of Mowshowitz. "And color number three is?" A mountain was fetched, and Zvi added "Get a swamp and you can yell Yahtzee!" Meanwhile, Mowshowitz's curved draw continued with Lieutenant Kirtar. However, Lauriol's draw wasn't half bad either, as his acceleration allowed him to play Phantom Flock on turn three. Mowshowitz matched it with Ghostly Wings on his Nomad, and put Psionic Gift on Kirtar. Aven Windreader made Mowshowitz's side better, and Zvi decided not to attack, fearing Lauriol's five untapped mana and a potential Second Thoughts. Lauriol drew a card on his turn, and conceded.

Mowshowitz started with Hydromorph Guardian, and had Phantom Nomad and Beloved Champlain in play by the time Lauriol played his first spell of the game- Flame Burst on the Guardian. Kirtar added to Mowshowitz's side, while Lauriol played his sixth land, shook his head, and summoned Nut Collector. Sure enough, Mowshowitz had Psionic Gift. Ghostly Wings on the Phantom Nomad prompted Lauriol to scoop.