Round 12:
Burned by Misfortune

With so many people on 18 points, there was a ton of math involved prior to the round as players scrambled to figure out if they were still live for the Top 4. Martin Juza and Paulo Vitor Damo da Rosa were each among the cluster of players vying for one of those final spots.

Juza, however, was in the tougher spot. He had been on 18 points for the past two rounds, but had been unable to finish off either Brian Kibler or Shouta Yasooka to hit the important 21 point mark. He had gone 3-0 with his Modern Jund deck yesterday, but was struggling as we moved closer to the elimination rounds today.

Damo da Rosa also lost last round, but had been fighting his way back from the middle of the pack all day and was now relying on his menagerie of Zoo creatures to secure his place playing tomorrow 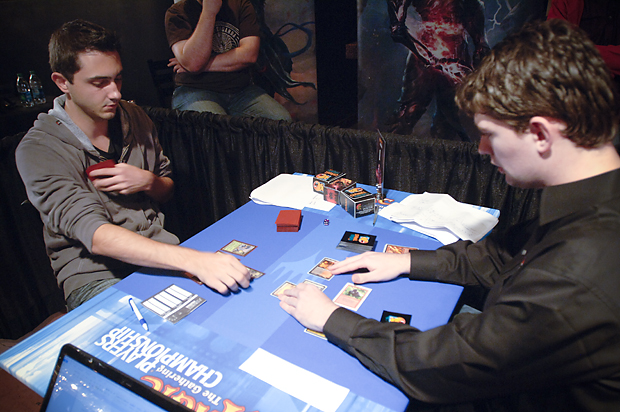 While the math was tough, the bottom line was clear: win and you're probably in. Lose and you were clearly out.

Damo da Rosa didn't waste any time trying to march his way to the Top 4, curving Kird Ape into Qasali Pridemage plus a Tribal Flames to put Juza to 8 life before he could even cast a spell. And when Damo da Rosa fired a Lightning Bolt directly at Juza's dome, even a Kitchen Finks couldn't save him from a swift and merciless end. Snapcaster Mage for Tribal Flames sealed the deal. 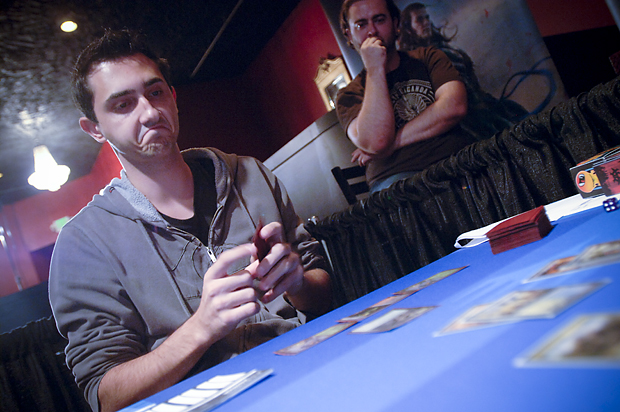 "What a great day," Juza said. He had dropped his last two rounds to fall back to the pack when a win in either of them could have sent him to the Top 4.

Juza was clearly frustrated as his opening seven had no lands of any kind in it. He had commented yesterday that sometimes your luck turns, and you often know it the instant it happens, as his did when he came back from an 0-2 start to finish the day 4-0 and move to second place. Unfortunately, it seemed as if his luck had turned back the other way today.

Damo da Rosa, however, was chugging right along, starting with a Steppe Lynx. The Lynx died to Lightning Bolt, but Damo da Rosa had both Kird Ape and Loam Lion to follow up.

Juza started defending himself with Tarmogoyf, but Damo da Rosa attempted to sidestep that particular fight with a Lingering Souls.

Inquisition of Kozilek gave Juza a glimpse of the future, and it didn't look good. Path to Exile, Lightning Helix, and Tribal Flames were all extremely bad for Juza, and he clearly recognized the trouble he was in. He took Tribal Flames before casting Pyroclasm to clear out the Spirits.

As predicted, Path to Exile cleared out the Tarmogoyf while Damo da Rosa's pair of 2/3s took him down to 12 life. 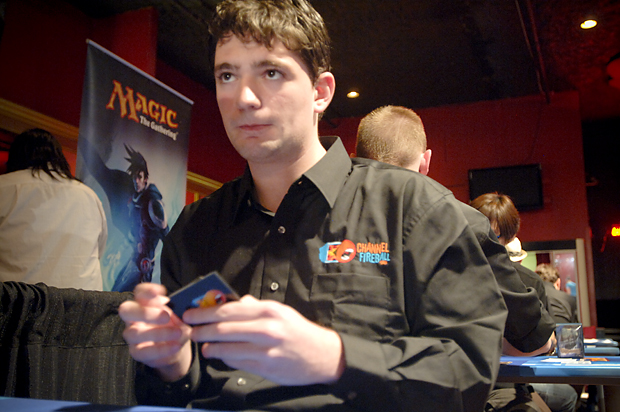 Paulo Vitor Damo da Rosa has his eyes on the prize, and a sliver of hope that he can make it in to the Top 4 playoffs.

Liliana of the Veil, however, killed the Loam Lion before dying to Kird Ape the following turn. Without black mana, Damo da Rosa couldn't flash back Lingering Souls. Instead, he simply lost his Kird Ape to a Terminate and cast a Steppe Lynx.

The Lynx stayed a 0/1 for the time being, but Damo da Rosa found bigger game in a Tarmogoyf anyway.

Pyroclasm cleared out the Lynx and Juza found the Bloodbraid Elf he had wanted for a few turns. But the cascade fates weren't kind.

"Can't even kill the 'Goyf," Juza said, staring at the Lightning Bolt his Bloodbraid flipped and the 5/6 Tarmogoyf on Damo da Rosa's side of the board. "Wow, this sucks."

Instead, Juza simply fired the Lightning Bolt at his teammate's head and began to try to figure out what the Brazilian pro had in hand.

But all of the calculations had only served to distract Juza, who then attacked with his Bloodbraid Elf thinking the three damage would kill it, despite the fact that he had done the same math with Lightning Bolt earlier in the turn.

"Yeah, perfect play," Juza said, shaking his head at the misplay and dumping the 3/2 into his graveyard while the Tarmogoyf lived on.

Damo da Rosa attacked Juza precipitously low before flashing back Lingering Souls. When all Juza found on his turn was a Bloodbraid Elf for Liliana of the Veil, all Damo da Rosa had to do was flash him a pair of burn spells to convince Juza to pack it in.