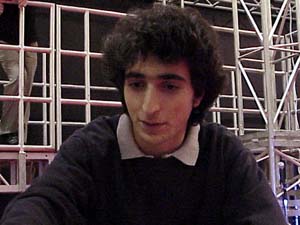 , Cloudpost. I don't know what to keep." - Rickard Österberg

Certainly nobody had Darksteel Colossus on their list of cards to watch out for, but France's Gabriel Nassif is hardly one to play by the rules. Taking advantage of the presence of Reap and Sow and Sylvan Scrying to maximize Cloudpost, he designed a truly heinous Tooth and Nail deck. His cadre of playtesters tweaked it to perfection, and now it's taking the tournament by storm. Norway's Rickard Österberg is piloting Big Red, and didn't much care for his chances.

Österberg led with Cloudpost and groaned when Nassif showed him a Sylvan Scrying for a Cloudpost of his own. He made a pair of Pyrite Spellbombs and passed the turn. Nassif put his 'Post into play and let him have free reign. Österberg needed mana and so cycled away his Spellbombs, finally finding a third land. Nassif continued to build up Cloudposts. Österberg made a Solemn Simulacrum and was done. Nassif played an Oblivion Stone and a third Cloudpost.

Österberg was swimming in it, too. He attacked for two and Fireballed Nassif down to ten. Nassif blew the Oblivion Stone at end of turn, then untapped and Mindslavered Österberg. He turned over a hand with two more Fireballs, along with Shatter, Chromatic Sphere, Electrostatic Bolt and Furnace Dragon. He drew a Cloudpost.

Nassif put the Cloudpost into play, along with the Sphere, then cast the Dragon. With its ability on the stack he popped the Sphere so he'd have two red mana left over. That he used to squander the Fireballs. Nassif untapped and entwined Tooth and Nail to get himself the Platinum Angel / Leonin Abunas combo. He also played a Jens and checked that Österberg had only one Fireball left in his deck before giving it back to him.

Österberg hit with the Dragon and played another sad robot. Nassif entwined another Tooth and Nail, this time for Duplicant and Darksteel Colossus. Reap and Sow cleared away one of Österberg's two Cloudposts. He ended his turn and crossed his fingers. Österberg untapped, drew a Chromatic Sphere, and popped it for red. That gave him Flamebreak. He could cast it, then Electrostatic Bolt the Abunas, then Shatter the Angel, and then swing in for one with his Blinkmoth Nexus. All this would bring Nassif to one, and leave him open to a lethal counterattack. With no outs, he scooped. Nassif breathed a sigh of relief.

Österberg led off with a Talisman, and Nassif put on his thinking face before ridding himself of it with Oxidize. He played a Cloudpost as his second land and ended his turn. Österberg played one of his own and made a Chromatic Sphere. Nassif untapped and played a forest before putting another 'Post into play with Reap and Sow. 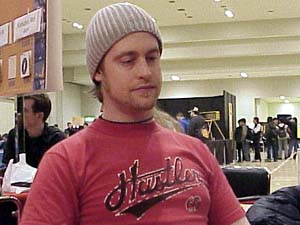 Österberg untapped and cycled his Sphere to get a Simulacrum into play. Nassif counted his opponent's mana and didn't like the number he got, so he entwined a Reap and Sow on Österberg's Cloudpost. Viridian SHaman took out the Simulacrum. Österberg played another Cloudpost and hit for one with his Blinkmoth Nexus.

Now it was Nassif's time to explode. An entwined Tooth and Nail got him Abunas and Duplicant, and a Darksteel Colossus from his hand joined the Abunas in play. Österberg sent Fireball at his head, but he was still at three. Nassif untapped and put Platinum Angel into play. The Dragon was Österberg's only out, and he did not draw it.