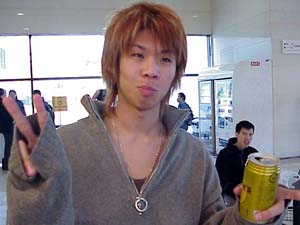 and Mori are easily two of the best players from Japan. Fujita is the notorious "Silver Collector" who has plenty of strong finishes all in second place, while Katsuhiro Mori is a former Rookie of the Year who has just come back from a short retirement. Fujita is looking to add another Pro Tour Top 8 to his resume, while Mori would like to reach that point for the first time and make a statement that he is back, and a force to be reckoned with. With records of 8-4, however, neither player can afford a loss here.

Fujita mulliganed his opening hand, and Mori opened with Vault of Whispers, Ornothipter and Tooth of Criss-Goria. On turn two he played Glimmervoid, and dropped an Arcbound Ravager, Frogmite and second Tooth onto the table. Lacking any better options Fujita Fireballed the Ravager for one, which caused Mori to sacrifice the Tooth to keep it alive. Completing his great draw, Mori played Skullclamp on turn three, and a Disciple on turn four. With all of "the important cards" out, Mori was able to win easily. 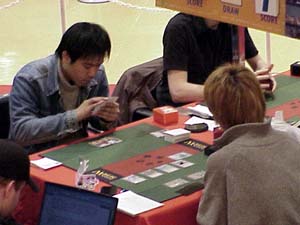 Mori opened with Ornithoper and Skullclamp, while Fujita had a second turn Talisman. Forgmite came out for free on the following turn, and Mori cast Oxidize off a Sphere to destroy the Talisman. He soon got to work, playing a Disciple and a pair of Arcbound Workers. Skullclamp killed one to provide two cards and make the Ornithopter bigger, and the momentum swung heavily in Mori's favor. Fujta's draw didn't offer up much resistance, although he was able to kill the Disciple with Barbed Lightning. Still, Mori dealt more damage and gained more cards with every passing turn. Eventually a massive attack with a pumped Ravager took the game, as Mori's gamble paid off- despite having all his mana open during Mori's attack, Fujita had no answer.