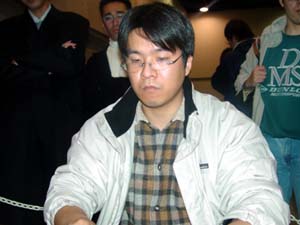 Shimra's Neurok Spy died to Echoing Decay, and Vulshok Berserker died to Terror. He had a Leonin Bola out, and it went on a Neurok Familiar that found Goblin War Wagon on top of the library. Yamanaka summoned Nim Shrieker, but only had Vault of Shadows as an artifact, so it was merely a 1/1. Yamanaka summoned Dross Golem, and Shimura played the War Wagon along with Copper Myr. Yamanaka's Shrieker and Golem got through for five damage total, and Shimura attacked back with the Wagon. This kept his Familiar and Myr back, which took the Bola. Cobalt Golem gave Shimura a little more defense, and the Bola kept the Dross Golem tapped down. Yamanaka destroyed it with Deconstruct, and brought out Death-Mask Duplicant. Grab the Reigns with entwine stole the Duplicant, and threw it at the Golem. This cleared the way for an attack, and the Shrieker blocked the Familiar for a trade. Yamanaka summoned Grimclaw Bats, and had plenty of black mana to power it.

This one Bat was essentially Slaughter with buyback if Shimura decided to attack, so he was forced to build his forces while he waited for an answer, or to simply overwhelm Yamanaka. This provided time to rebuild, and Yamanaka played his second Dross Golem of the game. Shimura played Krark-Clan Stoker, and Yamanaka broke the game wide open with Skeleton Shard. The other Golem came back, followed by Death-Mask Duplicant. Facing down an army that would keep coming back and with no way to fight it, Shimura conceded.

Shimura played Leonin Bola, followed by Vedalken Engineer. It brought out Cobalt Golem on turn three, and there was mana left over to give it the Bola. Yamanaka played Nim Shrieker, and Shimura summoned Quicksilver Behemoth. Yamanaka made a Dross Scorpion, and Shimura used the Bola to tap it on end step. Cobalt Golem gained flying and attacked for two, and Shimura put Wizard Replica in the air as well. Yamanaka played Dross Golem and Elf Replica, and Shimura send his Golem and Replica into the air for three damage. He followed up with Arcbound Worker and Fatespinner, depriving Yamanaka of the full use of his turns when he needed to catch up. Irradiate killed the Behemoth, but Yamanaka had skipped combat due to Fatespinner and couldn't attack. Shimura used Leonin Scimitar to make Cobalt Golem bigger, increasing the flying attack to four damage total.

Nim Replica was sacrificed to kill the Engineer, getting rid of the "blue elf" that had been powering many of Shimura's turns. Shimura attacked for one with the Replica, and played Sword of Fire and Ice to get a reaction of absolutely despondency out of Yamanaka. Betrayal of Flesh delayed things a little, as Yamanaka looked to draw an artifact destruction spell before it was too late. It never came, and he conceded to save some time for Game 3.

Shimura played Leonin Scimitar, and his Copper Myr was killed with Echoing Decay. Yamanaka's four swamps made Grimclaw Bats a significant threat, and Shimura played a cheap Frogmite thanks to his artifact lands, and made it bigger with the Scimitar. Essence Drain dealt with that threat, and the Bats attacked for one. Shimura played Wizard Replica, and gave it the Scimitar. Yamanaka attacked with the Bats and pumped it twice, then played Skeleton Shard. Shimura attacked for two with the Replica, and put a War Wagon on the ground. Consume Spirit killed it, and the Bat attacked for another point of damage. Another Replica attack brought Yamanaka down to twenty, and Shimura played Neurok Spy, giving it the Scimitar. The Bats attacked for three, and Yamanaka played Scavenging Scarab. Shimura's attack dealt four, and he played Quicksilver Behemoth along with Neurok Prodigy. 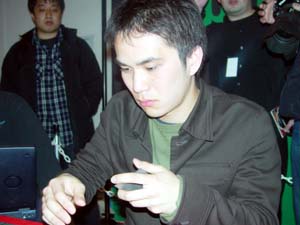 Yamanaka finally found an artifact creature to abuse with Skeleton Shard, and it was a good one- Death-Mask Duplicant. Still, Shimura's side was all evasion, and could easily get past it. The Spy, Prodigy and Replica dealt six damage total, bringing Yamanaka down to eight. Shimura added Vedalken Engineer and Krark-Clan Stoker to his side, providing a little more defense. The next attack brought Yamanaka down to one, and thanks to Betrayal of Flesh on the following turn, he was able to stabilize by killing the Neurok Spy just in time. They were in extra turns, but Shimura was ahead in the numbers game by one creature. On the fifth and last extra turn, he had more attackers than Yamanaka had blockers, and won the match.