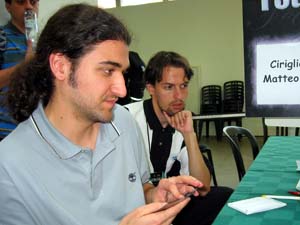 seems the Italian is going for it. Still notching nothing but wins he decided to play against Adam Urban. As long as he keeps winning, we'll keep following him.

Matteo sent first hand back. Adam opened with second turn Darksteel Pendant, but even with that help couldn't find his third land. Echoing Truth sent it back to Urban's hand.

On the next turn the Polish found his third land and replayed his Pendant. Cirigliano refreshed his hand with Thirst for Knowledge. Across the table Adam was now stuck at three lands.

Another Echoing Truth bounced the Pendant back. Urban tried Darksteel Ingot but Cirigliano had Condescend. On his sixth turn Cirigliano finally felt confident enough to drop Eternal Witness. He retrieved Thirst of Knowledge.

He had just found his fourth land, his first Island. Cirigliano tried Solemn Simulacrum but Urban had Annul.

Well, it was Thirst for Knowledge but they laughed. He used Shattered Dreams to see two Thirsts, one Echo and one Annul. He dropped March of the Machines. Matteo played both Thirsts in response but found no help.

The Witness brought Urban to fourteen and in came Thoren to set the game clock at "four turns of this and Adam dies". Matteo took care of the March of the Machines but let Urban play Darksteel Ingot and his own Thoren.

Matteo used Echoing Truth to get his Eternal Witness back. They traded Thorens and Cirigliano got his back. Solemn Simulacrum came back into play. A second Witness got Echoing Truth back online. Adam laughed.

With Matteo tapped out the Polish seized his opportunity. He unleashed Death Cloud for three. This left Matteo with no creatures, one card in hand and a bunch of lands. He topdecked Solemn Simulacrum.

Urban played his own Thoren. They traded and Matteo played his FOURTH Thirst for Knowledge.

Apparently this time is was as useful as the others. In came Triskelion. Urban peeked with Shattered Dreams and solved his problem with Barter in Blood. Cirigliano drew and laughed.

The Witness got another Witness and the second one got Thoren back. Urban's hope was his Darksteel Pendant. He chanted for Cloud and got something close: Barter in Blood.

Adam: "You are kidding, right?"

Guess what, he wasn't. The Pendant and a Serum Vision got Urban what he wanted: Death Cloud. The Witness went away but the Shard was still around. Matteo played Triskelion.

He need a good draw.

Matteo: "Sideboarding fifteen cards?"
Adam: "Believe me, I can. Nah, only thirteen."

Adam wasn't too happy about his hand so he sent it back. The second one wasn't much better but he kept it. Matteo mulliganed as well. They played "land go" until Adam missed his fourth land drop. A turn later he had to discard.

Adam: "This deck dislikes me." 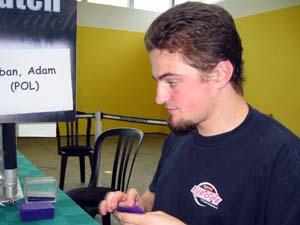 The Polish tried Barter in Blood with a "please?" but the Italian was unforgiving. Last Word. Eternal Witness came in bringing back Last Word. Urban shook his head.

Matteo 2-0 Adam. Matteo Cirigliano is one round away from perfection.