Round 13: Adam Prokopin vs. Nick Eisel 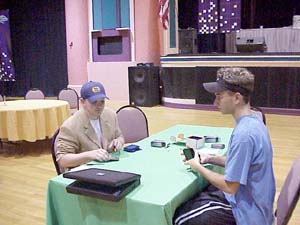 Adam Prokopin vs. Nick EiselAdam Prokopin made the trip in all the way from southern California. He's had some success on the Grand Prix circuit, including a Top 8 at Grand Prix Detroit. His opponent in the last round is a Pittsburgh player named Nick Eisel who entered a Grand Prix trial just for fun, won it, and then learned that his friends Mike Turian and Eugene Harvey were making the trip down to Tampa. He joined them and in round 13 he sat down with Top 8 on the line. The match also pitted the two most popular archetypes of the format against each other: Prokopin drafted red-green while Eisel went black-blue.

Eisel was surprisingly the aggressor early in game 1. His Dusk Imps were delivering the beats until Prokopin played out a Krosan Archer. Prokopin then put Seton's Desire on a Leaf Dancer to build a fatty big enough to attack. There was then a nifty sequence where Prokopin Fiery Tempered away a Gravegouger so he could get Firebolt back into his graveyard and return it to his hand with Anarchist. That Firebolt made sure Cephalid Broker never went active, which in turn made sure Eisel never drew a useful removal spell or bounce spell the entire game. Eisel did finally find a green mana for his splashed-in Call of the Herd, but that wasn't good enough to deal with either of the cards in Prokopin's hand (Muscle Burst and Squirrel Nest).

Eisel didn't find a third land until turn 5 in game 2 and then once he found one, Prokopin stole it with Petravark. You just can't have that kind of hiccup against red-green. Turn 6 Liquid Fire on Eisel's only blocker sent Prokopin through to his second Grand Prix Top 8.