Round 13: Albertus Law vs. Tsuyoshi Fujita

Even if he lost this round, Fujita's excellent tiebreakers would almost certainly propel him to yet another Asian Grand Prix Top 8. At 28 points, Albertus is no so fortunate. Fujita was not about to take nay chances with a concession—besides he was hoping to help out some of his friends still clinging to outside chances of a Top 8 berth.

Prospector was the opening play and it was killed with a Sparkspray on Albertus's second turn. The Top 8 machine played a Piledriver and sent the turn back. It attacked alone on turn three but a Goblin Matron assured that would not be he case for long as he searched up a Warchief. Albertus cycled his Dragon EOT and played a fourth turn Faithful and went up to 23.

Warchief came down and everyone attacked. The Faithful ate the Matron but Tsuyoshi did seven. Albertus Cycled Guided Light during his main phase and passed the turn back on five lands. Fujita played another Piledriver and a Sparksmith—he shot the Faithful and played another Sparksmith and attacked for seventeen!!! Albertus cast Renewed Faith to save himself. He cycled a Cave on his next turn looking for an out but there was nothing waiting atop his deck.

Tsuyoshi had the Prospector on turn one and Albertus came back with Lightning Rift. Tsuyoshi had a turn two Shadowblood Ridge—normally found in the board but sided in when he expects to need double black for Bidding more urgently—and cast a Piledriver.

Albertus passed the turn back with three land and the threat of Rift looming. When Tsuyoshi attacked he killed the Piledriver with Eternal Dragon. Tsuyoshi did not have a third land and played another Driver.

Albertus played his fourth land and bided his time. Tsuyoshi played a Sledder and waited for responses. The Singapore player killed the Piledriver with Renewed Faith before it resolved. Teroh's Faithful made things almost impossible for the Japanese player-not finding a third land wasn't helping matters. He merely played another Sledder and passed the turn back to Albertus who killed one with a cycled Spark Spray. A second Faithful came down and Albertus had the Astral Slide on the next turn. Without any land on the next few turns, Tsuyoshi conceded in obvious but gracious frustration. 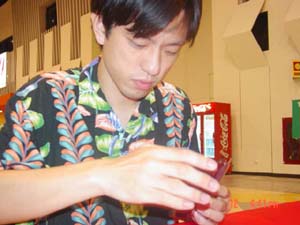 Tsuyoshi played a turn two Stabilizer and Albertus cycled in response. He played a Lighting Rift and passed the turn back to the Japanese player who attacked on turn three with a freshly baked Warchief.

Albertus played an Astral Slide and passed the turn. Tsuyoshi attacked for two more and made a Sulfuric Vortex that threatened to suck Albertus down if he did not find some Disenchants soon.

Siege-Gang Commander took him to seven and he fell to five from the Vortex. His next draw yielded nothing and he extended the hand. The next card down was, of course, a Disenchant. He could also have drawn a Burning Wish for a Pillage. After the game Albertus outlined all the ways he could have won if Tsuyoshi had not drawn his one Stabilizer. Despite falling short of the Top 8, Albertus should still finish in the money on the weekend.