Round 13: Alex Shvartsman vs. Alexander Witt 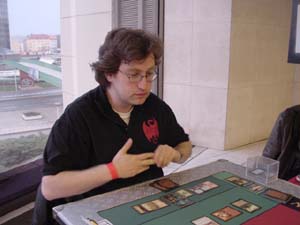 Alex Shvartsman is the GP king. He's been away from GP duties for a while but is back looking to pick up the couple of Pro points he needs to guarantee qualification for Worlds. Witt has been quiet since his Master's win but he's Dutch and they usually post good results on the Grand Prix. This is his Legions pre-release though.

Coming out of a very tough Pod 2 both players need to win out to make top 8. They both seem to have the tools to do it. Shvartsman has a very good black-white deck with triple Nantuko Husk while Witt has a bomb heavy green-red deck.

Alex Witt went first and mounted early offence with a Branchsnap Lorian followed by a Snarling Undorak. Shvartsman followed a Gustcloak Harrier with a Nantuko Husk and left both on defensive duties.

An Erratic Explosion on the Husk gave Shvartsman something to think about. He didn't sacrifice the Harrier and the Explosion killed the Husk.

Shvartsman was seriously under the cosh. Harrier got rid of the Lorian. Shvartsman summoned a Gangrenous Goliath, but it couldn't get in the way of the Snarling Undorak. It blocked the next turn, when Shvartsman had found a Cruel Revival to take out the Undorak after Witt had pumped it.

Witt didn't hesitate and charged in with his team of Vorine, Murlodont and a morph creature. The morph revealed itself to be a Venomspout Brackus and once the carnage settled Shvartsman was left with a Husk and Essence Sliver to Witt's Brackus and freshly summoned Timberwatch Elf.

The game then stabilized as both players restocked their forces and stared across the red zone at each other.

Witt had both Wellwisher and Embermage Goblin to swing the game in the wrong direction for Shvartsman. A Kilnmouth Dragon sealed the game.

Shvartsman started with two Deftblade Elite but then fell prey to a horrific color screw. His deck refused to cough up a single swamp and he could only manage to summon a Gustcloak Harrier while on the other side of the table Witt summoned Timberwatch Elf and a succession of beasts.

Searing Flesh put Shvartsman out of his misery in short order.