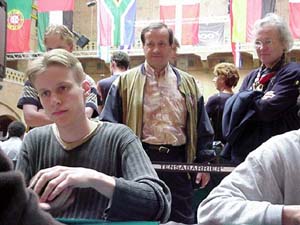 Victor van den Broek has made Top 4 in Osaka during the Masters. Amiel Tenenbaum is a known Pro Tour player. This match doesn't lack titles but it will be important as to the possible addition of a new one: European Champion.

The first few turns were spent playing land until Amiel dropped a Wild Mongrel followed by a Werebear that got targeted with Firebolt. Tenenbaum untapped and cast Roar of the Wurm to see his opponent scoop while discussing if he could use the card itself as a token.

Once again Amiel was able to cast a Werebear during his second turn followed by another two copies of the card during turn four.

Victor cast Call of the Herd and Flametongue Kavu to remove one of the Werebears. Amiel made a Birds of Paradise join his army and cast Beast Attack blocking an Elephant but dying to a subsequent Firebolt. 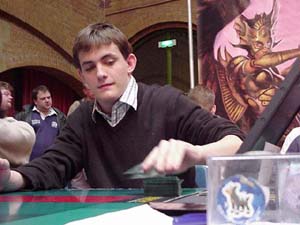 Amiel then cast Fact or Fiction revealing two Prophetic Bolt, one Call of the Herd, a Wild Mongrel and Shivan Reef

Amiel went for the first pile and cast a Beast attack. At the end of his opponent's turn he cast yet another Fact or Fiction.

Taking advantage of the enormous card advantage he got, the Frenchmen had no problems as he had three Call of the Herd, two Roar of the Wurm and two Beast Attacks. With this impressive draw there is probably no deck in standard that can handle such a draw.