Round 13: Antoine Ruel vs. Brian Selden 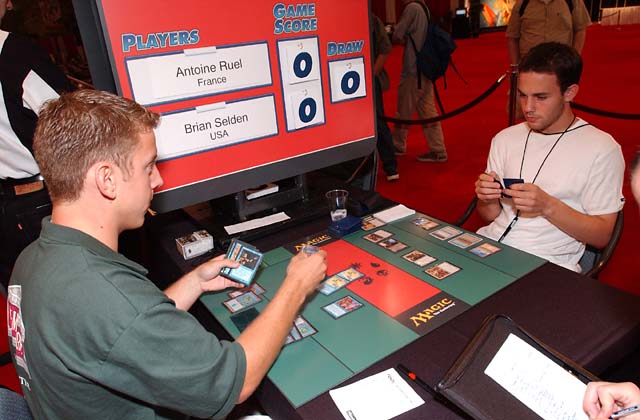 Ruel is an accomplished Grand Prix player, winning at Porto and coming in second at Cologne. He was running a modified white weenie, with a short rebel chain, Mother of Runes, and splashes of blue for Brainstorm and Meddling Mage.

Brian, former World Champion, was running a monoblue Illusions deck. The card advantage potential was impressive: Impulse, Accumulated Knowledge, Intuition, and even Merchant Scroll, in addition to the standard countermagic. (Of course, you lose a card when you play Donate; but the intelligentsia here on Sideboard staff are suggesting to this reporter that such is the point . . . )

For game one, Antoine put a strong foot forward, showing some early weenie beatdown with Steadfast Guard and Mother of Runes (a Soltari Priest would have added more pressure, but was countered). Brian gave his first hint of combo at the end of turn four, when he played Intuition and gave Antoine his choice of three Accumulated Knowledge. The Frenchman chose the loveliest one, and the ugly siblings flew off to the graveyard.

That Knowledge came in handy for Brian, as on Antoine's next turn a Seal of Cleansing tried to hit the board. Within the three cards searched in response was a Force of Will (and/or the blue pitch card necessary to cast it), and the Seal was countered. Then Antoine tried a Meddling Mage, which came into play naming . . . Masticore.

Immediately and dutifully, the Mage went about the business of scaring off Masticores. Indeed, there were none played on Brian's turn, and as with this reporter's mailbox at home, which coincidentally also scares off Masticores, the absence of such creatures serves as ample proof that the Mage was working.

On his next turn, in full swing celebration of the sheer absence of Masticores, Antoine took Brian down to 7 life.

And then Brian played Intuition again, and showed his opponent three Illusions of Grandeur.

On his own turn, the American played the Illusions, and zoomed back up to 27 life. Now a full white weenie swing didn't even bring the defender below his starting life total; and a Donate next turn put the combo hammer down.

Antoine tried to plow one of his own creatures to negate the strategy; but Brian had the Counterspell to stop that. After two turns of upkeep and a Mana Short, the combo finished the job.

Mr. Ruel after the game, with a good-natured smile: "Wrong Meddling Mage." Sure, Antoine, blame Pikula. (Don't we all?)

Sideboards for Brian and Antoine were straightforward: Brian brought in Morphlings, taking out one each of Impulse, Intuition, and Mana Short. Antoine took out his Mothers of Runes and a single Crusade in favor of Wax/Wanes and Disenchants.

Game two was another fast start for Antoine, who came out with Ramosian Sergeant and Steadfast Guard, with two more Guards coming to the aid of the Sergeant by the end of turn five. At first, Brian looked like he was playing (Sapphire) "Medallion-Go," as two came down. But a turn four Morphling looked mighty tasty. 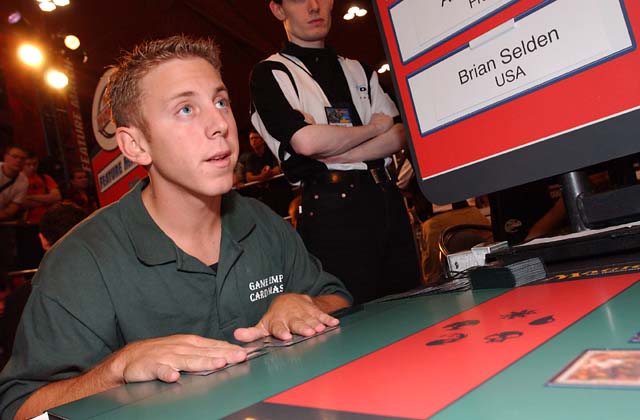 Sensing a window closing, Antoine kept smashing away, content to lose a Guard a turn to the Morphling's block. He had his opponent down to 6 life by turn seven; he himself was at 10. With two Guards, a Soltari Priest, and a Sergeant on the board, he could search before the next turn (if even for another Sergeant) and do lethal damage on turn eight.

So Brian was compelled to find and play out Illusions of Grandeur. He played Accumulated Knowledge (which, with two AK's already in the graveyard and two Medallions in play, looked startlingly like an Ancestral Recall), dropped down an Illusions, cruised up to 26 life . . .

. . . which made a lot of French guys (and probably some Belgians, and maybe even a few French Canadians?) up on the raised observer platform cheer loudly.

This reporter, of course, was still wondering when the Masticores were going to show up. Perhaps that mailbox has a 1500-kilometer range . . .

In the decisive game three, both players came out swinging: Brian with Merchant Scroll (which is a one-card reason to go out RIGHT NOW and buy 12 boxes of Homelands, the Best Expansion Ever with Merchant Scroll in It) . . . anyway, that Scroll was for Intuition; and Antoine with a Meddling Mage. This time, the Mage was perfectly tuned to . . . Intuition.

Stuck with the cards in his hand, Brian was able to counter a Soltari Priest, but had to accept a Steadfast Guard, which combined with the Mage brought his life down to 14. A Rushing River sent the Mage back, so that Intuition could get a three-point Accumulated Knowledge.

The beatdown continued, as a Soltari Priest made it into play and a Ramosian Sergeant joined him. Sitting at 10 life, Brian used his seven mana to play both Illusions of Grandeur and Donate.

Antoine seemed unfazed, even with only five land. His army, after all, was quite large: two Guards, a Priest, and a Sergeant. He paid the upkeep (2), laid down a land, and then paid for a Meddling Mage, which Brian Thwarted (via alternate casting cost . . . this becomes important down below). A second Meddling Mage, however, made it into play. Antoine thought long and hard, and then named Capsize. (Even though no one had seen a Capsize yet, this turned out to be on the mark, as there was a single copy in Brian's deck.) He then swung for seven, bringing his opponent down to 23.

On his turn, Brian laid down a land (now up to five) and tapped out to play Morphling, which alone was capable of picking off each attacker until the Frenchman ran out of steam.

As cool as a penguin in Birkenstocks and one of those refreshing fruit drinks with the paper umbrellas in it, Antoine paid upkeep on Illusions (4), Tithed for a plains, and then dropped Crusade. Swinging with a bunch of three-power creatures, he gave Brian's Morphling a bit of heroic pause before the super-creature, unable to activate any of its abilities, simply threw itself in front of the Mage. Both creatures died, and Brian went down to 11. 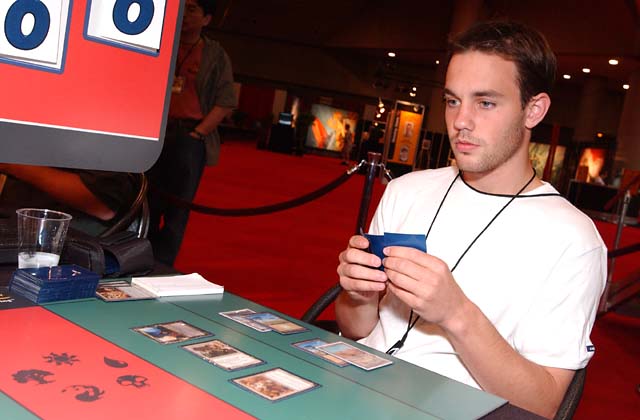 On his ninth turn, with six mana, the American played Intuition, and after a great deal of thought, chose two Merchant Scrolls (either one of which would get his single copy of Capsize) and another Illusions. Antoine allowed the defensive choice (Illusions), since he could not afford to see "his" Illusions leave the board.

Back on his turn, Antoine paid upkeep a third time (6), swung with everything (bringing his opponent down to 1 life), and then laid down his eighth land and passed the turn.

Brian used four of seven mana to play his own Illusions, hoping to go to 21. He did, but then he went back down to one as Antoine used his two open mana to Disenchant the poor bunny. (Or is it the dragon in the artwork getting Disenchanted? You decide.) With only three mana left and three cards in hand, Brian showed Force of Will . . . and two islands.

The cheers from the observing Legionnaires were deafening. Antoine gracefully apologized to Brian for the outburst, who equally gracefully accepted. This is, after all, a World Championship; and people will root for their countrymen.