Round 13: Ben Stark vs. Mike Pustilnik

This is Ben and MikeyP's first feature match, and their first match against each other...ever. Mike seems pretty happy to be here at DragonCon, though. When I asked him about the craziest thing he's seen so far, he answered, "The costumes – definitely, they're amazing!" Ben wasn't amused by the DragonCon attendees, though.

"Playing Magic is one thing, but dressing up as a princess with fangs is something else entirely," Ben commented. 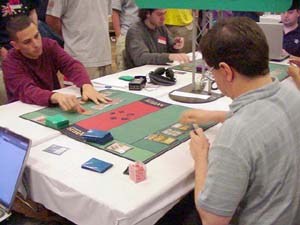 Mike won the die roll and elected to play first. He led with a plains, and Ben countered with a Bloodstained Mire for a mountain and a Raging Goblin, bringing both players to 19. Mike played another land (a Skycloud Expanse) and passed the turn.

Ben attacked with his goblin, then Firebolted Mike. He played another mountain and passed the turn. Mike cycled Renewed Faith at the end of Ben's turn, and then played a Nantuko Monastery. After another cycled Faith, Mike played an island to round out his complement of lands, and passed the turn.

Ben made a bold move when he tried to play a Goblin Warchief, but Mike had the Circular Logic and enough cards in his graveyard to make it work. He then tapped four lands to play a Deep Analysis, and Ben took the opening.

Ben swiftly slammed down a Goblin Warchief and a Goblin Piledriver, sensing weakness from Mike, who had only one land untapped. He attacked furiously, bringing Mike from 16 down to 8 in a single turn. On Ben's next turn, Mike sacrificed his Flooded Strand for another plains (going to 7) and cycled Decree of Justice to make two soldiers.

"I'll play Violent Eruption, doing one to each soldier and two to you," Ben said after Mike cycled the Decree away. "It's ten damage, and you're tapped out."

After a brief period of consideration, Mike conceded the point and shuffled his lands back into his deck.

Mike led with an island this time, while Ben played a mountain and a Goblin Sledder. He attacked on his next turn with the Sledder and a freshly played Raging Goblin. Mike was content to play lands with no other action, until Ben cast a Stone Rain at his Sungrass Prairie.

Mike responded with a Cunning Wish, and picked up his sideboard, hunting for something. He settled on Renewed Faith, and Ben asked, "So the Prairie dies?"

"Yes," Mike said, then played another on his turn. 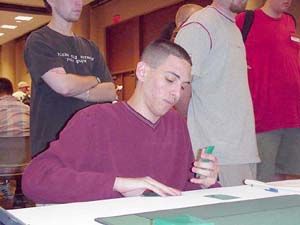 Ben sent the Goon in, but Mike had the Wing Shards. Ben checked Mike's graveyard, then played a Volcanic Hammer at Mike, who went to 8. Mike untapped and made a strange face as he drew his card. He tossed down a Circle of Protection: Red as Ben frowned.

"Circle Red..." Ben said, mostly to himself, as he sacrificed a Barbarian Ring to damage Mike further. Mike played a Deep Analysis and passed the turn. Ben, obviously affected by this turn of events, took a break from his normally frantic style of play to think about what to do next.

"I double-Ring you, rip my Ring and win," Ben said to himself and the crowd. He opted to play Violent Eruption at Mike at the end of his turn, but Mike had prudently left an island open to stop the pain. Ben drew...and passed the turn back, instead of winning the game right then. He didn't find that extra burn spell he needed.

Mike played a face-down morph creature and passed back to Ben, who drew a card, played a mountain, and Ringed the morph creature. "It's Exalted Angel," Mike said as he placed it in the graveyard. He then cycled away a Decree of Justice and made no soldiers.

Ben drew his card and looked even sadder than he was before. Mike, running off of six lands, played a Mirari's Wake and passed back to Ben. Ben was left with one card in his hand during multiple turns and with nothing else to do, he passed back to Mike.

Mike tapped three lands for an Exalted Angel, which was allowed to stay in play this time. When Ben's turn came around again, he Hammered the Angel, and scooped up his cards.

"If you can't scoop to COP Red and Angel, what can you scoop to?" Ben asked rhetorically.

Ben led with a Bloodstained Mire, and played a Goblin Sledder with his fetched red mana. Mike played a Lonely Sandbar for his turn, and Ben just smiled. He followed his strong first turn with a burlier second – a mountain and a Goblin Piledriver. Mike, still unfazed, played a Circle of Protection: Red on his second turn. 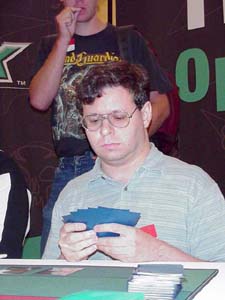 Ben, going for broke, played another Sledder and a Volcanic Hammer at Mike's head. He the attacked with his goblins, and passed the turn back. Mike played his land and passed back, and Ben played a Stone Rain on Mike's plains. He attacked with all of his goblins to take Mike to 9 life, but Mike recovered slightly with some more lands on subsequent turns.

He fished out a Wrath of God and played it, wiping out Ben's entire army. With no cards in hand and nothing on the table, Ben had virtually no options. He flashed back a Firebolt to kill a morphed Exalted Angel that Mike couldn't protect.

Ben attacked futilely with a Raging Goblin, and bantered with the spectators. "How come he has so many cards, and he's so little?" asked Antonino De Rosa.

"Fair question," Ben said, talking about all the cards left in Mike's hand.

Ben played lands despondently, while Mike swiftly took control of the game. Ben's start, while appearing promising, just wasn't good enough to rely on for the entire game. Mike cycled a Renewed Faith and played a Cunning Wish for a Beast Attack, then played the Attack and passed the turn.

Ben Volcanic Hammered the token, then hit it with a Barbarian Ring. Mike just nodded and flashed the Beast Attack back. He played an Exalted Angel to keep his beast company and passed the turn.

"Hammer the Angel, Firebolt the Angel," Ben said listlessly. "All this burn and a COP: Red."

Mike cycled away a Decree of Justice and extended his hand.