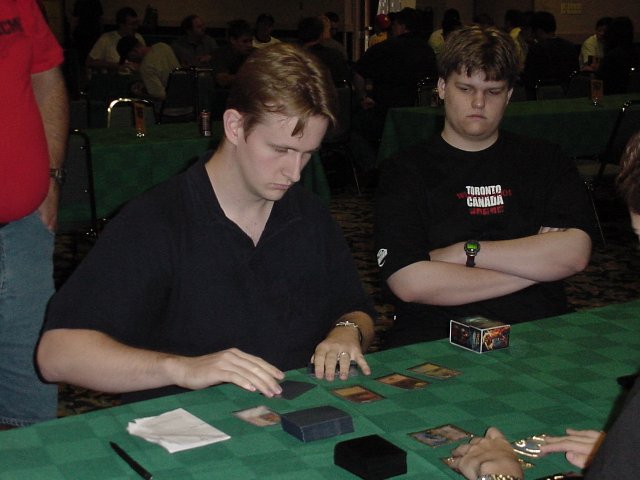 In the final Swiss round of GP Denver, Bob Maher played against Brett Shears.

Bob Maher is one of the most well known and respected players on the tour. He was player of the year last year based off his second place finish at Worlds and his PT Chicago championship. A Chicago native and Madison resident, Maher tests with the likes of Dustin Stern, Mike Hron, Adrian Sullivan, and yours truly. Bob chose to play the red-blue-white counter-trench deck designed by Ray DeGuzman. The deck contains counters, burn, and no main deck creatures. The deck has done well lately, qualifying Ben Seck for PT New Orleans and winning GP Kobe. The deck takes great advantage of the large amounts of creature control in many players' decks by making them dead cards.

Brett Shears played in his first constructed tournament in two and a half years. He took a break during Urza's Block and didn't come back until now. Ben comes from LA and took a twenty-four hour bus trip to compete in the GP. Shears chose to play a version of the much maligned Kowal.dec. That's right, the deck I designed actually managed to do well here. I qualified with it in the first week of the qualifier season and I have had a non-stop string of people complaining about its poor perfomance for them in the qualifiers ever since. Shears had some good innovations with the deck. He moved three Plague Spitters to the main deck and added two Spite/Malice.

Two Midwest decks squared off against each other for top eight.

Game one saw Shears play Vodalian Zombie five turns in a row. This was thanks to three Repulse being played. One from Shears, and two from Maher. Maher was unable to stop the aggro-control rush of Shears deck. When he tried a third Repulse on a Zombie, a countered it and added to the assault. Maher's only option was to play a Goblin Trenches and start trading lands for creatures. Unfortunately it he was too low, and when he attempted to Prophetic Bolt a Zombie, Shears played Undermine. Shears resolved Plague Spitter the next turn forced a concession from Maher. 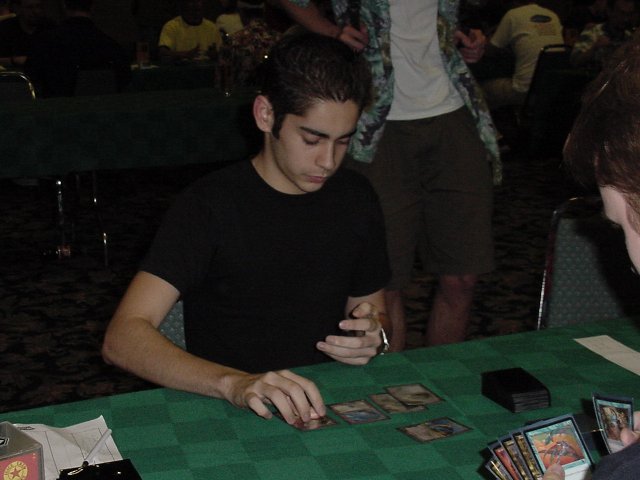 Game two went very long. Shears played an early Deed. He then attempted to start beating down with a Spitter, but Maher ended its life with a Prophetic Bolt. Shears resolved a Snake against Maher's Fact or Fiction and got in some damage. Maher eventually burned the Snake. Shears played Spitter, but Maher Routed it away. Shears drew into a Monger that Maher was unable to counter. Instead Maher played Repulse in Monger and Urza's Raged Shears for ten. Maher drew into a Trenches and forced Shears to blow his Deed. Shears' available mana was only three at the time, due to recasting the Monger. He would be unable to counter if he Deeded for three in order to get rid of the Trenches. This was Maher's first clue that he might be holding the Undermine that would do him in. Instead Shears Deeded for zero. Shears played another Deed on his next turn and this time had plenty of mana to remove the Trenches. Maher's only option was to Prophetic Bolt for the kill, but Shears had the Undermine which killed him.