With the final rounds of Pro Tour–Amsterdam kicking off, two of America's top stars sat down for a thirteenth round feature match. Brian Kibler and Luis Scott-Vargas were both are previous Pro Tour champions, and both have won their titles playing Extended, with Kibler the reigning Extended champ after Pro Tour–Austin one year prior and Luis's victory the year before in Berlin. It was a true battle of heavyweights, with the two players' combined total of Pro Points well into the hundreds.

After winning the die roll to play first, Luis had to open on a mulligan. Fortunately for him, his opponent was right behind, keeping things fair on six cards each—at least, six cards each until Scott-Vargas had to take a second mulligan. His five-card hand was enough, but Kibler was the first player to the table with a creature as he spent his first turn casting Treefolk Harbinger to fetch up a Murmuring Bosk to the top of his library. His opponent used a Misty Rainforest to find a Bosk of his own, using the tri-Forest to cast Thoughtseize. He saw a hand of Swamp; Treefolk Harbinger; Doran, the Siege Tower; Tarmogoyf; and Maelstrom Pulse. Doran hit the bin. 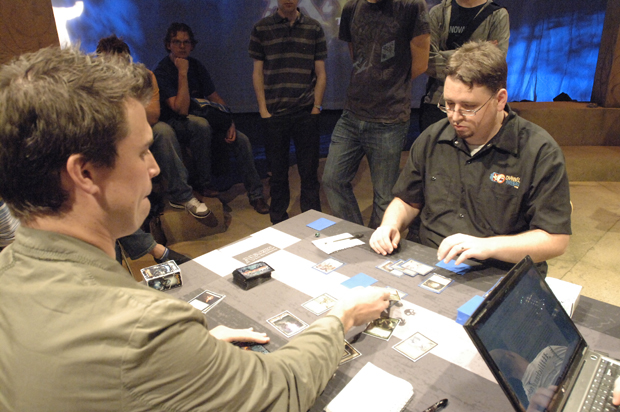 Though Kibler is a regular columnist for StarCityGames.com, he worked with Luis Scott-Vargas and a number of other ChannelFireball.com rivals for the Pro Tour. That meant they were playing an almost identical mirror match, one Kibler looked to be ahead in as he used a second Treefolk Harbinger to fetch up a replacement Doran, the Siege Tower. That allowed him to attack for 6 damage with his twin copies of Treefolk Harbinger, but his 0/5 was soon dead to the legend rule as Luis topdecked a copy of his own.

A Tarmogoyf for Kibler gave him an additional attacker but Luis managed to get an Elspeth, Knight-Errant on the table. Down to 6 life from early attacks and pings from his own mana base, Scott-Vargas was struggling to stay in the game. He fell to 3 as his opponent attacked him with both a Tarmogoyf and a Treetop Village, but began to stabilize.

A Knight of the Reliquary from Brian gave him an additional attacker with which to swing through his opponent's team, but Maelstrom Pulse ended the Knight's journey early. A Treefolk Harbinger for Scott-Vargas found another to put on top of his library and he used Elspeth to make a Soldier token, incrementing the loyalty on the planeswalker to eight. Brian simply kept sending with his creatures, trying to wear down his opponent's defenses, but the Elspeth was giving him lots of trouble. With enough loyalty to fuel its ultimate, Kibler was running out of time to come up with a win.

He pushed through into the red zone one final time, knocking out a Soldier token and Treefolk Harbinger. Post-combat he had Loam Lion, and that would be enough to do it if Luis didn't have anything on his own turn. Scott-Vargas drew and surveyed the battlefield but having stacked his library with a Chameleon Colossus from the Treefolk Harbinger, he knew he was out of options and conceded.

"As much as I like you, I wouldn't mind if you did that again ...." Brian Kibler informed his friend and opponent as they shuffled for the second duel, referencing the double mulligan and constantly-behind draw Luis Scott-Vargas had had in the first game.

"Meh. If I'd drawn a Murmuring Bosk earlier, I think I win that game!" Luis replied.

The second game started off with Thoughtseize, but this time it was for Brian Kibler. Kibler saw a hand from his opponent that featured two Reveillark and two Tarmogoyf with double Murmuring Bosk for lands. He forced a 'Goyf to the graveyard, then a turn later cast Treefolk Harbinger to call forth Doran, the Siege Tower for battle on the third turn.

Luis Scott-Vargas cast the other Tarmogoyf in his hand, which was functionally a 4/4 after Kibler cast his Doran. The 0/5 didn't last long, though, as a Maelstrom Pulse from Scott-Vargas sent it tumbling to the graveyard. A Chameleon Colossus from Kibler was answered by a Reveillark from his opponent, and Brian further cluttered the battlefield with a topdecked Doran, his second. He also cast a Treefolk Harbinger but curiously tutored for a Forest to put on top of his library. The draw was dead unless he needed five mana; did he have his own copy of Reveillark to cast?

Luis was going to have to wait a turn to find out, casting Knight of the Reliquary and passing. That sent Kibler into the tank, trying to figure out the correct play. He opted to attack with his Doran and Chameleon Colossus, sitting on four mana. Scott-Vargas activated a Treetop Village and blocked the 4/4 Changeling with Knight of the Reliquary, Tarmogoyf, and the creature-land, letting the legendary Treefolk through. Kibler pumped, Luis took 5, and after combat the Tarmogoyf and Knight were dead as was the Colossus. 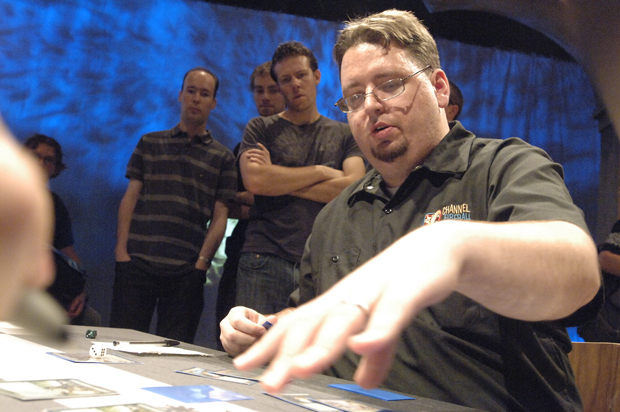 Check out the hook while LSV revolves it.

For the first time in the game, Luis Scott-Vargas cast a Doran of his own, killing his opponent's copy. That allowed him to go on the offensive as Brian was sitting on just two Treefolk Harbingers for his remaining creatures. One of the 0/3s chumped a Treetop Village while a Reveillark made it through unblocked; the score was 10-7 in Scott-Vargas's favor.

Brian untapped and played his fifth land. He quickly tapped them all to cast Reveillark; he had been holding the 4/3! That created an awkward standoff in which the two Reveillarks stared at one another, potentially able to return Dorans from the graveyard if they died. The standoff didn't last long, and momentarily bounced two Doran, the Siege Towers back to the battlefield as the 4/3s traded with one another, also netting Kibler a Treefolk Harbinger and Luis a Knight of the Reliquary.

A second Reveillark hit the battlefield for Luis, quickly dominating the skies. At 7 life Kibler had exactly two draw steps to figure out a solution to the 4/3. When the first yielded a blank, he had just one turn remaining in the game. The second draw wasn't a removal spell or another Reveillark, and the players headed to the rubber game.

"One of us needs to mulligan, and we both know who it is ...." Luis Scott-Vargas joked as they shuffled for the final game of the round—no doubt each would want the other to start off down a card. Kibler laughed.

With precious little time left in the round, Brian Kibler frantically flicked through his cards on his first turn. It didn't take him long to figure out casting Treefolk Harbinger was correct, the 0/3 calling up a Doran, the Siege Tower to the top of Kibler's library. On the second turn he repeated the play, casting another 0/3 and fetching up another Doran. 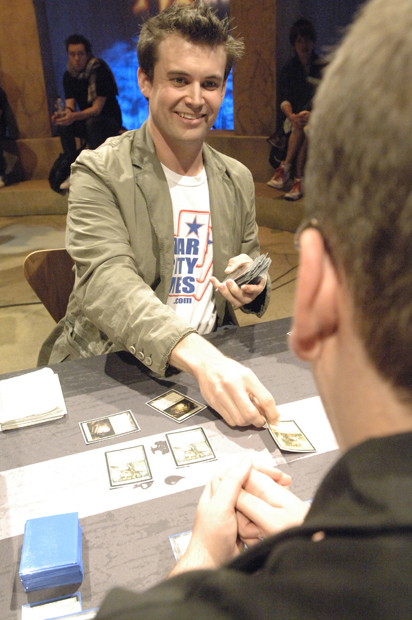 Kibler shows off the trademark style that made his Pro Player card such a good Saproling token.

Across the table Luis Scott-Vargas got busy casting spells of his own. A Loam Lion was first, trading for a Harbinger after Brian cast his first Doran, then a Maelstrom Pulse to take out the 0/5. But, thanks to his second Harbinger, Kibler had a backup copy of Doran and cast that, continuing to press with Treefolk. Luis cast a 3/4 Tarmogoyf in an attempt to stay in things, but had it killed by Slaughter Pact.

Remembering to pay for the Pact thanks to the six-sided die he had placed on top of his library, Kibler untapped to send lethal damage to the red zone. When he made the correct attack, Luis did the math and extended his hand in defeat, the game over in a quarter of the time it took for the first two.

"You too!" Kibler replied.