Round 13: Bram Snepvangers vs. Chris Benafel 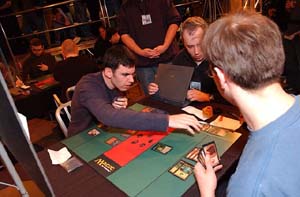 Bram Snepvangers and Chris Benafel are both trying desperately to make the Top 8. Brian Kibler has been helping Benafel along, first by passing him the ultimate red-green deck, then by getting a match loss in their meeting last round by misregistering his deck.

Bram has had no such help, and has had to earn every win. His red-green deck will have it's work cut out for it against Benafel's deck full of Sparksmiths and Wirewood Savages.

Benafel had a turn-2 Elvish Warrior and a turn-3 morph, which traded when Bram attacked with his own. Bram's was indeed a Skirk Commando, a good call by Benafel.

Bram made another morph, and then cycled a Tusker after Benafel dropped a Sparksmith.

"My deck is soooo good... Oooh, that's gonna set you back a little, Bram," chided Benafel as Bram cycled the 6/5.

Benafel laughed and played out his second Sparksmith, hamming it up for the crowd. The game was certainly going his way.

From there on out the game was all Sparksmiths. Nothing Bram could play was safe—not Wall of Mulch, not Elvish Warrior, not Goblin Sledder. At one point Benafel was down to seven life, which would have made the game interesting if Bram's deck contained Searing Flesh, but alas, it did not.

Snepvangers inadvertently left his sideboard at his last match and asked to go get it. Benafel asked the judge if not finding it might warrant a game loss, but that wasn't the case. In any event, Bram returned, 'board in tow.

As Bram stared at his opening draw, Benafel taunted him. "Do you have a good one?" Bram mulliganed, effectively answering no.

Bram had an early Wirewood Elf that allowed him to accelerate to a turn-3 Snarling Undorak, and Benafel had no Sparksmith, just a Goblin Sledder and a Wirewood Savage.

From there, the Sharpshooter took over the game for Bram, forcing Benafel into bad trades in combat, and shooting down everything from Elvish Warrior to Symbiotic Beast. Benafel eventually found a Solar Blast to kill it with, but by then Bram had two creatures in play and Benafel was down to 5 life. One attack and one Solar Blast later, and Snepvangers had evened the score.

"What'd you keep, Bram?" asked Benafel between games, referring to Bram's mulligan, "One land? You lucky son of a gun."

"No, it was quite good," the Dutchman replied.

"Really? In that case...," said Benafel, trailing off into thought.

Snepvangers had to mulligan to start the final game, and Benafel did, in fact, pump the fist. "I can taste victory!" he cried.

Again, Bram's mulligan hand gave him the Sharpshooter, but this time Benafel had the tempo advantage due to going first. The American's Elvish Warrior and Wirewood Savage had dropped Bram to 14, and then Benafel dropped a Tephraderm—a bad target for the Sharpshooter—to complicate matters. 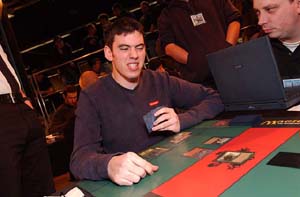 Time became an issue at this point, as it often does in Benafel's matches, and he called over the table judge to make sure Bram was playing at a reasonable pace. Granted, Snepvangers is a "deliberate" player, but Benafel's actions probably were more to rattle the Dutchman than to accuse him of stalling.

Bram played a couple of face down guys, and then Benafel sent the Tephraderm in. A triple-block took down the derm, but good damage assignment allowed Benafel to kill all of Bram's blockers thanks to the 'Derm's ability. But all the carnage set off a chain of Sharpshooter triggers, and the next thing Benafel knew, his Barkhide Mauler and Elvish Warrior joined the 'Derm in the bin.

Once the dust of that trainwreck settled, Benafel put out a Wirewood Savage and Bram played out two morph, which he quickly revealed to be Spitting Gourna and Snarking Undorak. Benafel took a few hits and cursed his deck.

He finally drew Solar Blast to take out the Sharpshooter, then dropped a Fogbeast, drew another card, and played another Savage and a Goblin Sledder. Bram attacked with his Undorak, and when Benafel assigned three blockers, Bram killed one with Pinpoint Avalanche, pumped his Undorak, and killed the other two in combat. Benafel was distressed. He could have prevented such a disaster by also blocking with the other Savage, but he was assuming Bram had no removal in hand.

On his next turn, he drew a Charging Slateback, but had to play it face up in order to draw an extra card from his remaining Savage. He dropped a Sparksmith and a Wellwisher and said go.

Bram attacked with his Undorak, which wasn't blocked, and killed the Savage with Commando Raid. Benafel traded his Slateback for Then time ran out. 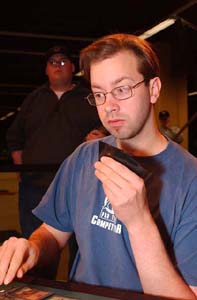 Bram played a Krosan Tusker and ended the turn. On extra turn 1, Benafel played a Symbiotic Beast. The crowd thickened.

On extra turn #2, Bram ripped a Wave of Indifference off the top, targeted all of Benafel's team with it, and won the match.

Chris was eliminated from Top 8 contention. He lamented afterwards about not quadruple-blocking the Undorak, and pointed to that moment as the turning point for the match.