Round 13: Bram Snepvangers vs. Jeff Fung 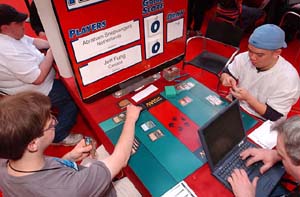 Bram Snepvangers is trying to make his first Pro Tour Top 8. The Dutchman had made four Top 8's at Grand Prix, but never here at the "Big Show."

His opponent, the affable Canadian Jeff Fung, has one Top 8 to his name – achieved at his first Pro Tour – and would like very much to duplicate the feat.

Fung won the flip and decided to play.

The first five lands Fung drew produced red mana, so he had to settle for Pyromania and Pardic Arsonist, whereas Bram got the friendly draw of all three colors of mana (green/red/blue), and put out Wild Mongrel, Skywing Aven, and Nantuko Disciple. The Mongrel ate the Arsonist, and Fung had to use Pyromania twice to kill the Disciple, discarding a Krosan Archer and a Muscle Burst at random.

Wild Mongrel and Skywing Aven are hard enough to deal with even with a good draw, so it was no surprise that Fung was backpedaling badly with no access to green. He called upon the ghost of Tom Guevin, knocking on his deck and saying, "One time for Tommy!" Tommy responded with a Forest off the top, and Fung cast Call of the Herd. He then Pyromania'd the Skywing Aven, discarding Blazing Salvo at random. Bram unsummoned it by discarding a Seize the Day.

Bram showed that it was, in fact, a good one when he attached with his Mongrel into the Elephant, pumped it to 4/4, then flashed back Seize the Day and attacked for six with the Mongrel and two Acorn Harvest tokens. Fung was down to six.

Fung flash backed the Call, but Bram had a few more flashbacks of his own – Acorn Harvest and a Chatter of the Squirrel that he had discarded earlier. Fung couldn't stop all the squirrels and scooped.

Bram made the first move with Chatter of the Squirrel, but Fung had the king of the red/green mirror, Wild Mongrel. Bram was unfazed and attacked with his squirrel. Fung rolled his eyes, but refused to block. Bram then flashed the Chatter back. 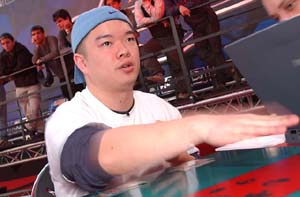 This time, Fung's first four lands were all Forests, preventing him from adding anything else to the fray. Bram took the opportunity to bust out a Skywing Aven and hand it a Crackling Club. Fung took three hits from the 3/1 flier and drew... a fifth Forest.

He did cast Call of the Herd, the first half of which died to a combination of blocking a squirrel and a Firebolt, the second half of which stayed in play and started attacking Bram back. Fung eventually drew a Mountain, but because the 3/1 and the Firebolt in Bram's graveyard were threatening to take away Fung's last five life points. So the Mountain fueled a Petravark that would force Bram to draw another land.

Bram was game; he sacrificed an Egg and cast Refresh looking for land. No dice. His draw phase was fruitless as well. He scratched his head.

Bram attacked for three in the air again, bringing Fung to two. He then tapped out to Acceptable Losses Fung's Mongrel.

Here's where it gets interesting. Fung had two cards in his hand: a Muscle Burst (good for +4/+4) and random cards. Bram has 11 life and no untapped blockers; the Crackling Clubbed Skywing Aven is his only creature. Fung had an elephant and a Petravark, as well as the Mongrel, plus five Forests and one Mountain.

Should Fung save the Mongrel with the Muscle Burst?

He chose to, making it 6/6. Bram sacrificed the Club, and Fung discarded his last card.

Fung untapped. He could attack Bram for 7 – not enough – but if he drew Fiery Temper, he could madness it, making the Mongrel 4/4, just enough for 11 total damage. He drew... 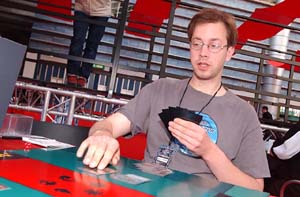 Sonic Seizure. The sad part about the situation was that if Fung had NOT saved the Mongrel, he would have won with that draw. He would have attacked with the elephant and the Petravark for 5, Muscle Burst for 4 more, and Seizured for 3, discarding the random card.

There were two other relevant cards in Fung's deck that hew could've drawn – one was Krosan Archer that would have kept the Aven from killing him for a turn. It is unclear whether or not saving the Mongrel would have had an impact in that scenario. The other possibility was Pardic Firecat, which would have won him the game if he had NOT saved the Mongrel: 3 elephant + 2 Petravark + 2 Firecat + 4 Burst = 11.

Fate was cruel, and he drew one of the other two cards, and it may have cost him a trip to the Top 8.