Round 13: Brian Kibler vs. Itaru Ishida

Two famed players from different continents crossed swords in the new Standard environment this round. Brian Kibler, noted deckbuilder, Dragon-lover and shameless self-promoter had managed to pull himself from 3-3 to a three-way tie for fifth at 7-5. Considering the Top 4 all have 8-4, he's in good shape to make a run at the title. He's doing it in style, too, bringing an updated Mirari's Wake deck that's set to crush the competition. 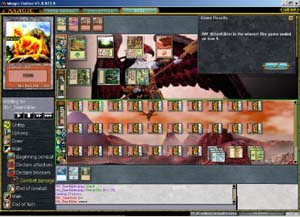 (click to open full-size in a new window)He's a real contrast to the reserved Ishida, but even he has come alive in the spirit of the Invitational. Ishida's working against type today, running a straight-up red-green beatdown, instead of one of the crazier concoctions for which the Japanese are famous. It stands a poor matchup against Kibler's Wake.

Ishida started out right, with Wild Mongrel and Call of the Herd, but Kibler still had all of twelve life by the time he was able to Speculate for three Moment's Peaces.

A bolt used twice put him to eight. He tapped all but two lands for Mirari's Wake. The mana burn from his next fog put him to seven. Ishida was holding a pair of Violent Eruptions. Kibler hadn't a care in the world. Burning Wish got him Time Stretch, and he got ready to take two more turns.

They were good ones. The first saw him develop his mana with a second Wake and a pair of cycled Krosan Tuskers. The last of it he spent Burning Wishing for his kill Card, Firecat Blitz, and playing out Compulsion. As if it mattered.

Ishida got a really busty start in the second game, leading with Llanowar Elves, then Grim Lavamancer and Wild Mongrel. Kibler Speculated for Moment's Peace, but without green mana he would have to wait a turn for his Verge to come online. Those two turns let Ishida take him from twenty to six, courtesy a madnessed Rootwalla. 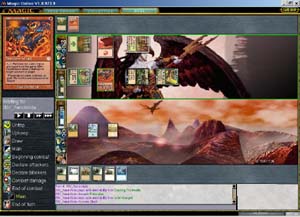 (click to open full-size in a new window)Kibler waited on Memory Lapse and Krosan Tusker, eager to dig to some action. Ishida played a fourth land and passed it back. Kibler thought hard. He decided that if Ishida had Violent Eruption, Memory Lapse wouldn't be enough, so he cycled both Tuskers, tapping out. Ishida had nothing.

He started work. Compulsion and Rampant Growth got him cards ahead. Ishida Reclaimed all of Kibler's Fogs at end of turn, then when Kibler tapped out to Compulsion, he Naturalized Compulsion. Of course, he wasn't drawing burn, just more Naturalizes. Kibler hit himself with Time Stretch. Another Compulsion was waiting for him. Finally, Tusker got him Burning Wish to serve up Gerrard's Wisdom, putting him safely out of the danger zone. Mirari's Wake powered up Crush of Wurms, and then things were really over. A second Burning Wish for Time Stretch finished things off.