Round 13: Brit Beats the Bluffs 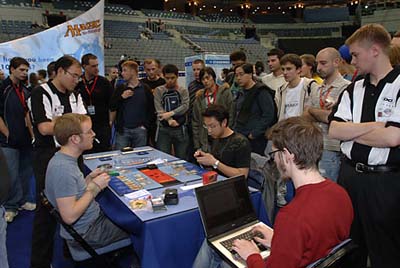 This match drew a crowd right from the start.

has been a rumour running around for a while now that the English cannot draft, but Quentin Martin is looking to put the quash on that bit of nonsense. For this round, it would be none other than Terry Soh standing in his way. Quentin started with a perfect 20 on the die roll, and chose to play first. His red/blue/green deck is running high on four drops, but has fair card quality. He looked at his opening seven, and decided that they just weren't good enough when playing for a Pro Tour top eight.

Luckily for him, Soh had a mulligan too, as each player sought for a combination of land and spells.

'One mulligan each. That seems fair' suggested Soh.

'Well… you're going to keep going, so that will be nice.' It turns out that Quentin was wrong on this one though, as Terry had a land and an Elvish Skysweeper to Martin's land go.

On turn three, Quentin bust out a Gelectrode, but it seemed that Soh had his number, playing a Shielding Plax on his one drop to keep it safe from any pinging action. With few good targets for pinging, Quentin went with an Ocular Halo, for extra draws when pings didn't seem appropriate. Terry played a Nullmage Shepard, to which Quentin struck back with a Patagia Viper, which brought a couple of Terry Soh tokens with it.

Nullmage Shepard swung in, and Terry had no further plays. Drawing two cards per turn though was enough to give Quentin plenty to do. He played an Infiltrator's Magemark on a Viper token, then attacked with it and his flying snake. The flier was taken down by Skysweeper, and Soh took two.

For his turn, again Terry had no play, while Quentin's card drawing engine kept bringing him plays, this time in the form of War-Torch Goblin and Goblin Spelunkers. Terry had access to four colours of mana thanks to a Rakdos Karoo, but it seemed that he had little in the way of plays against the Englishman's board. He tried to work on this with Invoke the Firemind to draw four cards.

Terry took another two from the Magemarked Terry Soh token, and Quentin passed. The Invitational winner attacked for two, and Quentin didn't block, seemingly unafraid of bloodthirsty green monsters that could come springing forth in the second main phase. The Ghor-Clan Savage that came along was especially big thanks to a Vigean Hydropon that preceded it. Down 13 to 14, it seemed that the one Magemark for consistent damage might be the telling factor in the match, when backed up by huge amounts of card drawing from Martin's Gelectrode.

Terry cast a Sell-Sword Brute and passed, happy to play the waiting game.

Quentin got another plink in, taking Terry to 10, then made it 8 with a Steamcore Weird shot to the dome. With four creatures on the board, including a Nullmage Shepherd, Terry got rid of Ocular Halo at the end of Quentin's turn, and then elected not to attack, instead setting his sights on the Infiltrator's Magemark in play on the other side of the board.

Quentin sent another Steamcore Weird to the dome to put Terry on 6. He then attacked with both his Terry Soh snakes and a War-Torch Goblin. Terry blocked the two he could with Nullmage Shepherd and Ghor-Clan Savage. With damage stacked, Quentin sacrificed his War-Torch Goblin to shoot Nullmage Shepherd for 2, then resolved damage, losing one token, and his Magemark to a Shepherd activation. Terry was now at just four, and looking close to Gelectrode range.

At the end of turn he played Cerebral Vortex targeting Quentin, giving him six cards, at the expense of 3 life. It looked that Terry was going in for the kill, with a double Leap of Flame to fly in. Quentin shot Terry for one, then Runeboggled, looking for an instant to keep going with Gelectrode for the kill. It wasn't coming though, and the two fliers got to come in for exactly enough. 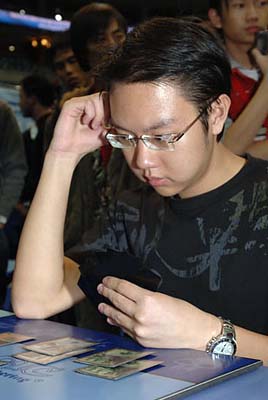 Soh was up to his usual tricks this match.

After being very mana flooded in Game 1, Quentin had to mulligan his opening six on the play. Terry had the first good 7 card hand of the match and kept. He also had the first play of the game in Sell-Sword Brute, while Quentin stuck with his regular Gelectrode start.

Terry played his third colour of land and passed.

Quentin just played a land and said go, to which Terry drew two cards at the end of turn with Cerebral Vortex.

Terry played a Dimir Guildmage and Izzet Signet, and passed. Quentin's turn was quick and vicious - Steamcore Weird to kill the Guildmage, Forest, go. Terry had a Helium Squirter for good times in the air, and was matched by Quentin's Green flying Patagia Viper.

Terry made his Squirter fly, and attacked, daring Martin to block.

'I'll bite' declared Martin. That is what snakes do after all. Terry had no trick, and thanks to Gelectrode, Quentin took it down.

'Bluff number 1' remarked Quentin. Technically there had been a lot of weak Runeboggle bluffs already, but we'll let Martin have his moment in the sun. Getting Soh on a bluff is pretty good going.

Quentin played a Vedalken Entrancer to bounce Soh's Sell-Sword Brute and swung. The following turn he got to swing again, trading his Entrancer for the Brute and taking Terry down a little. He played an Ocular Halo on his Gelectrode and passed.

Soh had a Gnat Alley Creeper, that would put Quentin to a decision on drawing cards or pinging, but unfortunately, for Soh, there was a second Halo for a Soh token to ensure plenty of cards.

All looked rosy for Quentin until Soh showed an Electrolyze to take down both Haloed creatures, and draw a card to boot. Soh then played a Shielding Plax to draw yet another card.

Ultimately it was Quentin that had board advantage, with a Weird, followed by an Ogre Gatecrasher, and he pushed his men in to take Soh for five. Terry made a good blocker in the form of Nullmage Shepherd, and Quentin tried to make it a very bad one with Incite Hysteria. A Muddle the Mixture stopped that plan though, and when each creature attacked, Quentin could only sneak through 2. Soh attacked back to allow for a bloodthirsty Ghor-Clan Savage. Quentin had a Vacumelt though on the critical turn, and attacked for the win in Game 2. 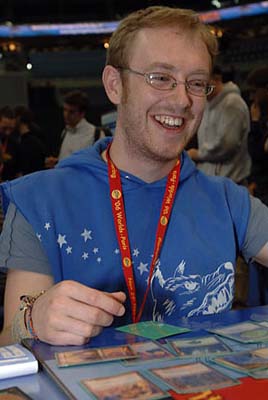 Take one down for the Queen!

Time was drawing close in the match, and each player was playing at an impressive rate. Terry took a mulligan on the play, and Quentin did the same.

The first threat of the game was an Ogre Gatecrasher off a signet for Quentin on turn 3. This met a Sporeback Troll from Terry on turn four, and then Quentin went back to the regular Gelectrode plan. Again it got an Ocular Halo, and again Quentin drew more cards. Terry liked that plan, and used Cerebral Vortex to draw some himself.

nvoke the Firemind killed Gelectrode, but Quentin still had some moves, with an Infiltrator's Magemark for his 3/3 Ogre, and Wee Dragonauts. His Ogre swung uncontested and Quentin passed.

Terry had an Assault Zeppelid for his offence, and a Shielding Plax to keep it relatively safe. However, Quentin suddenly had more blockers in the form of a Sparkmage Apprentice, and a Patagia Viper (plus the additional Terry tokens that seem to follow it about with some regularity). Terry was down to just 6 at this point, and with a 4/4 unblockable guy on the board, things looked pretty tough. He swung in with his Zeppelid, and had a bit of a think before playing Gnat Alley Creeper.

On his turn, Quentin attacked with his entire team, sensing the kill.

Terry blocked and played a Cleansing Beam to take out a bunch of green creatures, but ultimately it was the unblockable four damage, plus some extra to the head with Steamcore Weird which put it away.