Round 13: The Broken Mirror Match 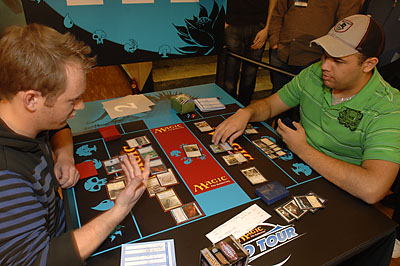 Quentin Martin and Osyp Lebedowicz appear to be up to no funny business… at the moment.oth Quentin Martin and Osyp Lebedowicz are known on the Tour for their tall tales, and both players have found themselves in the final draft of the day with just 3 losses, meaning that 3 wins, or perhaps 2 wins and a draw, will see them into the top eight. I sat down to cover the match to ensure that you heard it exactly how it went down.

Each player went with the blue-white archetype in the final draft of the day, but it was Quentin's deck that was particularly interesting, as it was a straight blue-white Sliver deck, with some potentially very powerful control elements, and a milling strategy in the board for slow matchups. Quentin had expressed thoughts before the draft that he quite liked 'niche' deck types, and that Slivers was good enough to almost have broken out from that mould. Having been a little greedy taking Pulmonic Sliver 2nd over Temporal Isolation, and Watcher Sliver 4th in the first pack, he had been paid off fairly well, with such solid inclusions as Telekinetic Sliver and Quilled Sliver, though there was a disappointing lack of Sinew Slivers for the Englishman in pack 3.

Osyp won the roll and chose to play first.

"Are you the face of American Magic right now?" asked Quentin.

Both players had white beginnings, with Osyp starting the damage race with an Amrou Scout, and following up with Aven Riftwatcher. Quentin had a Saltfield Recluse.

"We might be here for a while," remarked Quentin, who wasn't close to joking. Both players were blue-white, and there had been a lot of Saltfield Recluses on the table.

Osyp swung with his flyer while he effectively could, and after Quentin played a Telekinetic Sliver in his turn, he used Amrou Scout to find a second Riftwatcher. With two Riftwatchers, he could get in for 2 for a turn, as the Recluse could only shut down one of them. The life totals were 14 to 24 in Osyp's favour. However, with a Synchronous Sliver, Quentin's plan soon became clear. He could play both offense and defence with his slivers, who, unlike Osyp's men, would not vanish.

At the end of turn, Osyp fetched Riftmarked Knight, and had no attacks for the turn, only playing a Chronosavant and passing. Quentin, meanwhile, had both Watcher Sliver and Sidewinder Sliver, to build a board that looked pretty formidable. In Osyp's upkeep he tapped both Amrou Scout and Chronosavant. Again there were no attacks for the American, who played Dreamscape Artist and Zealot il-Vec and passed.

Quentin got in some 'free' attacks to take Osyp back down to 20 played Opaline Sliver, then during Lebedowicz's upkeep, tapped down Amrou Scout, the Zealot, Chronosavant, and a Plains. Osyp had no play.

More free attacks took Osyp to 10, and another Synchronous Sliver seemed likely to help seal the deal. Osyp used his Dreamscape Artist at the end of turn to thin his deck a little, before Quentin played his upkeep effects again, tapping all of Osyp's Islands, along with a Plains and Chronosavant. In the attack step, Amrou Scout also got tapped. Osyp's Zealot was stopped by the Recluse again, and that was the end of the turn.

For the following turn, Quentin attacked with all his slivers, then tapped some to eliminate the last of Osyp's blockers, dealing easily enough damage to take things to Game 2.

Before Game 2, Quentin moved to his milling plan, which he had already planned for matches against white decks. Sunlances and Amrou Seekers came out, to be replaced by Screeching Slivers and an Eternity Snare. He couldn't rely on Telekinetic Sliver dominating the next game (or even showing up).

During sideboarding, Mark Herberholz came over and started trying to get a chant of "U.S.A., U.S.A.!" going. It got louder and louder, despite the fact that Heezy was the only one chanting. Eventually a judge came over and politely asked him to shut his yap.

"We're in Switzerland… I guess I have to remain neutral, right?"

Frank Karsten leaned over from his feature match and calmly suggested, "Just get him, Quentin." 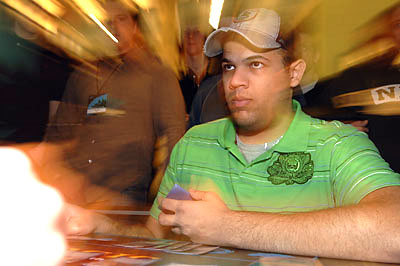 'Osyp attempts to use his mental powers…'

For the second game, Quentin had a double mulligan on the draw, while Osyp had a pretty strong start, suspending a turn-one Ivory Giant and having a Dreamscape Artist for the second turn. Quentin simply suspended a Riftwing Cloudskate and passed.

Osyp had nothing for his third, preferring to wait and activate his Dreamscape Artist after Quentin had played his Prismatic Lens. One way or another, it shouldn't be a lack of mana that would decide this game.

The Artist got to work again the following turn, leading Quentin to ask if there was a spicy morsal being ramped up to. Osyp just smiled and nodded, playing a Flickering Spirit. First blood came on the next of Osyp's turns, as he attacked with both his creatures, then played Witch Hunter just in time for it to be bounced by the Cloudskate, who was joined by Synchronous Sliver.

Ivory Giant came into play for Lebedowicz, and the subsequent attacks took Martin to 12. Witch Hunter returned, and the turn was passed. Quentin attacked Osyp down to 13, then used Momentary Blink on his Cloudskate to put off his Witch Hunter woes for another turn.

It turned out that his woes were worse than he realised, though, as Dreamscape Artist allowed for a discard of Akroma, Angel of Fury, who was brought back into play with Resurrection. This is, according to Dave Grant, known as "The Dave Grant Trick." Against blue-white decks, it is a pretty good trick, and all it took was a Wipe Away on the Telekinetic Sliver that showed up the following turn for Quentin to scoop.

Somewhere in a corner, Mark Herberholz could be heard singing the "Comeback City" song, which was no doubt accompanied by the appropriate chicken dancing. Osyp has missed out needing to win the final draft at Limited Pro Tours before, so he was still a little hesitant to start dancing, shuffling in businesslike fashion.

For the third game, Quentin elected to draw first, and both players kept. There were no turn-one suspends though, with a Duskrider Peregrine being put on suspension turn 3 instead. Quentin had a Prismatic Lens turn two, and went for it on turn three, with a Telekinetic Sliver that got hit by Mana Tithe. Quentin knocked on the table in frustration.

"Maybe I got greedy…" he said.

Osyp played out a Benalish Cavalry to Quentin's Synchronous Sliver, and started beating with the Cavalry and the Peregrine, quickly taking Quentin to 15. Quilled Sliver seemed a pretty good answer to this, when it came online, but for another turn the Englishman was faced with some big attacks. He used Temporal Isolation on Duskrider Peregrine and took just 2, before Osyp suspended Riftmarked Knight. Quentin, meanwhile, went in with his vigilant Slivers and made a Venser's Sliver and a Sidewinder Sliver, suddenly having the sort of nice synergistic board that seems inevitable with his draft strategy for this draft. 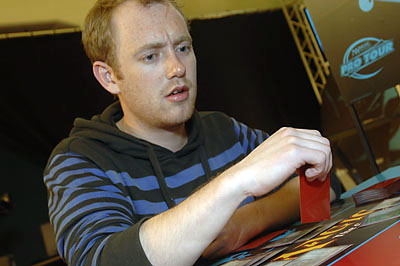 …but Quentin pretty much always looks this confused.

Osyp drew and passed, allowing Quentin to play Screeching Sliver and swing in with everyone - though his Venser's Sliver was hit by a Temporal Isolation. Witch Hunter then came out to play. At the end of turn, Quentin milled Osyp for five.

"This could go horribly wrong… hit the Akroma, lose to Resurrection in hand," remarked Quentin, who had fallen in love with decking people in Limited in Kamigawa block using Dampen Thought. He didn't hit an Angel, though, and the following turn attacked Osyp to 1 with his vigilant monsters. Things were looking very tough on Osyp, who needed to do 13 damage swiftly, and was facing some heavy resistance. Quilled Sliver made attacking horrible, and a Momentary Blink even got rid of the Isolation on Venser's Sliver.

At the end of Osyp's turn, Quentin again went to milling. Osyp's deck was down to 16 cards, but Akroma was now in the graveyard. With 1 damage left to do, Quentin went to the tank. He needed three turns of milling as the board stood to deck out Osyp, or he could simply engineer a swing for the final point.

He declared attacks with his two 3/3 Slivers and waited to see what Lebedowicz would do. Synchronous Sliver got double blocked by Riftmarked Knight and his friend, while Benalish Cavalry stood in the way of Venser's Sliver.

In the face of this board, following his draw, Osyp simply extended his hand.