Round 13: Calling Down The Lightning

If you were playing here at the World Champs this weekend, the person you'd least like to face is Conley Woods. Largely because he appears to be unstoppable, not dropping a match on day one or two. Matthias Hunt is making the most of a reasonable run at the Rookie of the Year title. Apparently it's now down to just Hunt and Fabian Thiele.

But of course, Hunt first has to contend with Woods. 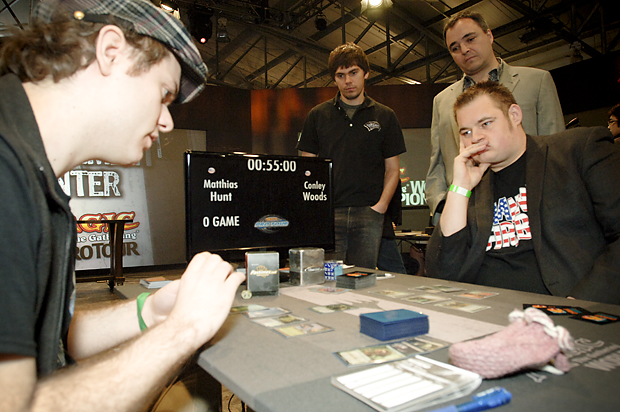 Matthias Hunt is nearing the finish line for Rookie of the Year. There's just one problem: he has to get through Conley Woods, who has been on an undefeated run all weekend.

Off to a good start, Hunt won the die roll and played a Treetop Village, while Woods dropped to 18 to play a Stomping Ground and summon a Noble Hierarch. Woods did lack a second land, however, and the Qasali Pridemage he summoned was quickly Smothered by Hunt, who followed that up with a Tarmogoyf. Woods found a Kessig Wolf Run, and summoned a 2/2 Wild Nacatl.

Hunt tried to summon a Garruk Wildspeaker, but Woods surprised him with a Negate. A Breeding Pool allowed Woods to summon a Geist of Saint Traft, but he was now on 13 life to Hunt's 16. Hunt attacked with the Goyf, dropping Woods to 9, and summoned a Kitchen Finks to take himself back up to 18. Woods fell to 8 from a Horizon Canopy to Bant Charm the Finks, before attacking for 7 with the exalted Geist. Hunt Doom Bladed the Wild Nacatl, but thought twice about attacking with his Goyf, instead sending a Treetop Village. Woods burnt it to the ground with a Lightning Bolt.

Woods attacked with his Geist again, and with the help of Kessig Wolf Run, traded it for the Goyf, Hunt falling to 7 from the token Angel. When Woods tried to pump his Hierarch on the following turn, Hunt killed it with Putrefy.

With the board now clear, Hunt found and played another Treetop Village, but Woods again toasted it with a Bolt before drawing and summoning a Kitchen Finks of his own. Hunt took out the first half of the Finks with a Damnation, but couldn't stop Woods summoning a Snapcaster Mage to flash back a Lightning Bolt in order to finish game one. 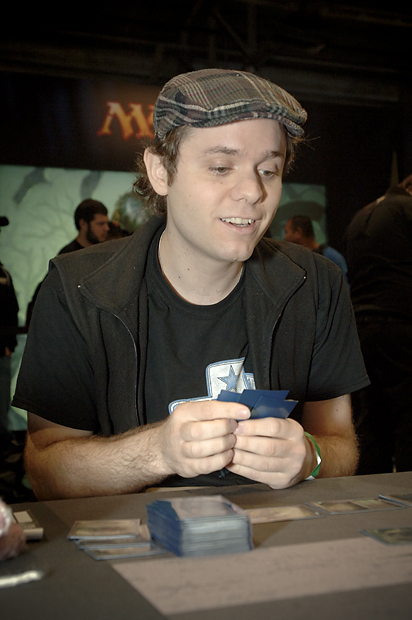 Matthias Hunt may be down a game, but his Death Cloud deck can still get him a match win if he plays carefully!

"The Negate was good, I didn't think you'd be main-decking that," Hunt admitted as they shuffled for the second game.

Hunt again began the game with a Treetop Village, and followed it with a Sakura-Tribe Elder. Woods had no play on turn-one, only fetching a Stomping Grounds with a Scalding Tarn. He had no spells on turn two either after playing a Plains. Hunt attacked for 1, summoned a 1/2 Tarmogoyf, and played a second Treetop Village. Woods finally summoned a Kitchen Finks, taking himself back up to 18 after playing an untapped Temple Garden.

Hunt played a Forest, and passed the turn. As yet, he had no Swamps in play. Woods attacked with the Finks, and the Elder blocked, before going in search of blacker pastures. Woods followed the attack up with a 3/3 Knight of the Reliquary, an unused Misty Rainforest waiting in reserve. Hunt summoned a Shriekmaw, killing the Knight, before attacking for 2 with the Tarmogoyf and playing a Golgari Rot Farm. Woods fell to 16, then 15 when he cracked his Rainforest.

The Finks attacked Hunt to 17, and Woods summoned a second one, going back up to 17. Hunt smothered the untapped Finks, putting Woods to 19, but making the Tarmogoyf 3/4. He attacked Woods to 13 with his team.

The larger Finks attacked Hunt down to 14, and Woods passed the turn back without further play, with Plains, Temple Garden, Stomping Ground, and Steam Vents untapped. When Hunt attacked again, Woods Bant Charmed the Goyf, falling to 10. Hunt summoned another Sakura-Tribe Elder, which soaked up the next attack from the Finks.

Hunt prodded awake one of his Treetop Villages, and attacked with it alongside the Shriekmaw, knocking Woods to 4.

"End of turn, Helix you, Helix you." Woods announced, slamming a pair of Lightning Helixes onto the table, taking Hunt down to 8, and himself back up to 10. Woods attacked with both Kitchen Finks, but Hunt animated the other Village, eating the smaller Finks and Putrifying the other. Woods back up to 12, who played a post-combat Noble Hierarch.

Now, a quick aside on Conley Woods this weekend. He has been playing very aggressively, practically throwing his cards at his opponents, as The Fire burns fiercely within him. Not so much this morning, showing a more subdued side to the usually Gentle Giant. Had he stayed up too late playtesting Modern last night? Had he eaten something that had disagreed with him? Had The Fire dwindled to mere glowing embers?

Nope. As Hunt passed back his turn, Woods's hand went into motion, slamming a third Lightning Helix onto the table, swiftly untapping, throwing down a Snapcaster Mage, and flipping a Lightning Bolt out of his graveyard and into the middle of the table. And with that, Hunt was dead. 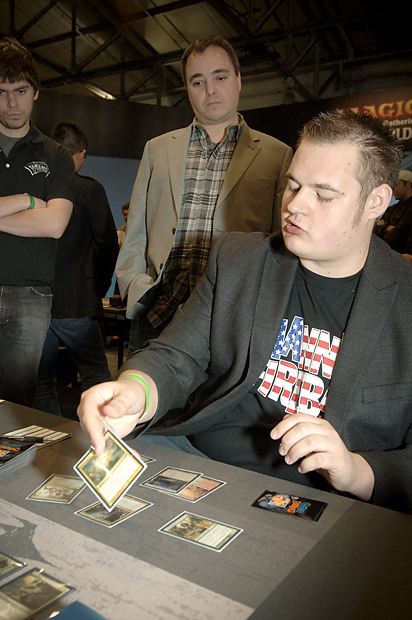 4 Liliana of the Veil 2 Garruk Wildspeaker