Round 13: The Champ and His Millions 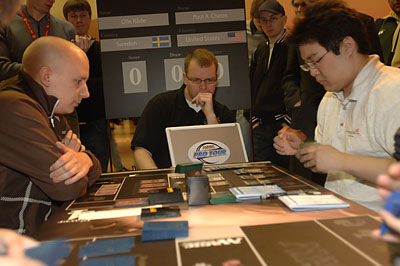 Hall of Famer Olle Råde and his Goblins face off against Paul U.S. National Champion Paul Cheon with Gifts Rock.

Råde has been on a tear this weekend, going 4-2 in Standard with a crazy Building on a Budget deck, and then bettering that performance yesterday with a sterling 5-1 record in draft. Today he faces the toughest format for someone who hasn't been deeply involved in the game - Extended. What deck does one play if one doesn't know the format? Why, Goblins, of course! Olle's opponent this round is the U.S. National Champ, Paul Cheon. Cheon said that the two decks he was trying to choose from were Affinity and Gifts Rock, but with a heavy Boros presence a certainty, he decided to take the safer route and pick good ol' Rock.

Cheon led with a Breeding Pool into a turn-one Birds of Paradise, matched by Råde with Skirk Prospector. Turn-two Pernicious Deed from Cheon stuck the game immediately in the mud, as Råde would now have to balance aggression with not getting demolished by the card advantage Cheon would gain from popping the Deed and killing off loads of Goblins. On his turn, Råde sacrificed his Prospector and played Seething Song, putting a Goblin Ringleader into play and then another Prospector, though Råde did not attack with his Ringleader for reasons unknown.

Mogg War Marshal gave Olle another pair of red men, but on his turn Cheon cast Gifts Ungiven for Living Wish, Cabal Therapy, Eternal Witness and Loxodon Hierarch. Råde put Living Wish and Cabal Therapy in Cheon's hand, losing a pair of Goblin Matrons to the Therapy on the next turn. Cheon followed with Living Wish for Eternal Witness but dropped to 7 from Råde's attack. Genesis delivered a blocker with some heft for Paul, and a Deed for one was just enough to put him out of range of Råde's attackers for two more turns, at which point Genesis plus Hierarch recursion ended the game. 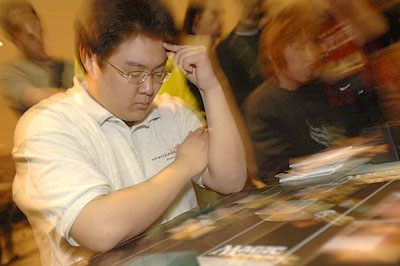 Råde had to mulligan for Game 2 due to that whole "not drawing any lands" thing. His second hand was pretty bad as well, but had a turn-two Blood Moon if he wanted it. Sadly Cheon played a Forest and Birds of Paradise on his first turn, making that plan considerably less sexy. Instead Olle went with Goblin Warchief, which got smacked down right quick by Smother. Gifts from Cheon grabbed Plow Under, Eternal Witness, Living Wish, and Genesis again. The Plow and the Witness were shipped to the graveyard this time, and with Olle's draw giving him essentially nothing, Cheon extended his record on the weekend to 10-3.