Round 13: The Clean Sweep

Antonino De Rosa sat down across from Shota Yasooka, he didn't recognize him, and probably didn't lump him the same class of Japanese stardom that his teammates Tomoharu Saito and Tomohiro Kaji occupy. Saito picked up on this, and pointed to Yasooka, saying, "Leader!" 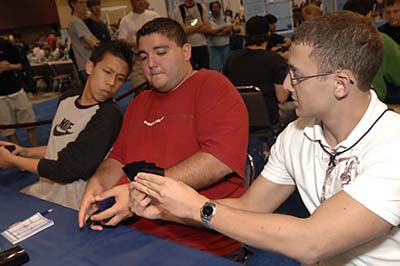 The Americans didn't immediately recognize all three of their opponents.

"You're the brains of the operation?" asked De Rosa, trying, perhaps, to rattle his foe slightly. But for all his skills at Magic, Yasooka knows scant English, and just shrugged off the question. But De Rosa continued, "Are you nervous?" he boomed, and when Yasooka looked at him quizzically, he simply repeated the question even louder. "NERVOUS?"

Saito translated. "No," replied Yasooka. "Really? You should be really nervous! Do you know how much money we're playing for? I'm really nervous," De Rosa prattled on.

The reigning U.S. Champ then leaned over to his teammate Alex Lieberman, who was sitting across from Kaji, and said, quite seriously, "You know you're playing a master, right? So play a little slower than usual."

De Rosa's other mate, former Pro Tour champ Ken Ho, kept quiet during all of this and merely shuffled away.

To start things off, Lieberman mulliganed to six after leaning over De Rosa to consult Ho, the obvious brains of their organization. Kaji compounded Lieberman's woes by hitting his only land - an Orzhov Basilica - with Rolling Spoil on turn three. A Farseek from Kaji on turn four had him up 6-to-1 in on-board mana.

Kaji kept up his assault on Lieberman's mana by Putrefying a Signet, but couldn't draw a threat. Lieberman managed to get a pair of Blind Hunters into play, but then Kaji's monsters finally decided to show up, first a Simic Sky Swallower, and then a Moroii, which gave Lieberman pause.

Lieberman made a Skeletal Vampire, but Clutch of the Undercity put it back in his hand, and after a quick discussion with his teammates, he scooped. "He's got a weird deck," he lamented aloud.

De Rosa was falling into the Yasooka trap, trying to beat a deck full of counterspells by playing expensive sorceries. Overrule, Swift Silence, and Error kept De Rosa from being able to do anything, and Angel of Despair mopped up. Ho quietly lost Game 1 as well, putting Big Tyming in 0-1 holes across the board. 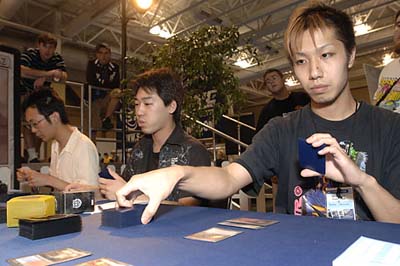 Lieberman Castigated twice early in Game 2, with one getting a SSS, one being countered by Voidslime. Kaji was accelerating his mana, however, and a transmuted Clutch found him a Rolling Spoil to crush Lieberman's Karoo, leaving him with just three mana. Lieberman looked around the table hoping for some optimism from elsewhere, but it wasn't coming.

He finally got back to four mana and started playing Loxodon Hierarchs, but Kaji went to the air with Skeletal Vampires. In a matter of turns, Lieberman was defeated.

De Rosa looked to be in good shape, nailing several of Yasooka's lands and getting a Simic Sky Swallower into play. But Yasooka had the answers, ripping mana No. 6 and slapping Twisted Justice - I believe the only one in his deck - on the table. De Rosa was dumbstruck, and quickly found himself on the losing end of more Angels.

Ho's deck couldn't keep up with Saito's speed, and the Japanese finished a 3-0/6-0 sweep of the Americans.