Round 13: Cormac Smyth vs. Dave Kearney 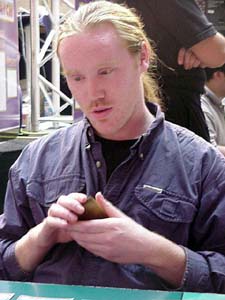 These players were both pretty surprised when they heard they would be featured. The idea was brought up by Irish judge Oli Bird, who really liked to see some Irish guys covered. After explaining what they were doing in the feature match area while out of contention for Top 8, the conversation shifted to their chances.

Cormac has played this match-up a couple of times before and based on those results thinks he will get crushed, as his deck, Squirrel-Opposition, has a hard chance keeping a creature on the board against the Wild Research deck full of burn spells Kearney is playing. Kearney wanted me to add later to Cormac has been in the finals of the Irish Nationals twice, while Smyth told me that Dave came in third this year.

Smyth started, after enjoying seeing Kearney take a mulligan. He lead with a second turn Looter and was really relieved when Kearney failed to play a land on his second turn. He then made a Squirrel Nest and had good hopes to ride that card alone to victory. This seemed a pretty viable plan when he is able to counter the Fire on his Looter and a Squirrel. Opposition soon came down which all but sealed the game for Smyth. After a little struggling with a Fiery Temper by Kearney and some more creatures were played Smyth could finally come in for lethal damage a few turns later. 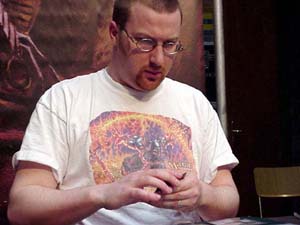 The second game saw enough lands on both sides of the table. Smyth came out blazing with second turn Mongrel, third turn Arrogant Wurm but was soon stopped by the presence of the allmighty Flametongue Kavu. Smyth had one of his own, which gunned down Kearney's Merfolk Looter.

This in turn made Kearney angry enough to play yet another Flametongue, this time targeting his opposing twin. All Smyth could manage was a Looter of his own. Kearney proceeded to wreck him with a Violent Eruption on the Looter and Mongrel.

Smyth was able to save his Mongrel but had to empty his hand in order to do so. This did give him a great window to show why he should be featured more often: he topdecked the fourth Flametongue of the match! Flametongue traded and suddenly Smyth is left with only six life points. He did have a Rushing River to breath a little longer, but when Kearney started activating his fresh Looter again he is able to burn Smyth out.

Smyth chose to play first in the final game again after both players readjusted their sideboards a little, with Kearney bringing back his copies of Fire/Ice and Smyth mostly thinking about changing it. Smyth refused to play his Merfolk Looter until he has some counter backup online, but failed to find the fourth land he needed for that plan. Kearney tried for a Lightning Angel, which met the one foil Counterspell in Smyth's deck. Still not having found a fourth land, Smyth laid a Mongrel, leaving Logic mana open. Kearney just played his Flametongue targetting everybody's favorite hound but got hold off by a Logic. The second Flametongue did get to do his job but the Mongrel was quickly replaced. Both players went for Looters, but with Smyth still not having found a fourth land a Violent Eruption wrecked havoc again.

When Kearney laid the Wild Research, the game was pretty much over if Smyth didn't immediately find a red mana source for his Hull Breach. A desperate Ice on Kearney's Coastal Tower to dig one card deeper didn't help him either. The active Research gave Kearney all the options he needed, and after burning the only non-land permanent Smyth had left Kearney could come in to finish Smyth off, who was still without a red mana source.