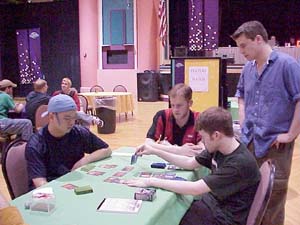 Dan Clegg vs. Jeff Fung Round thirteen was a meeting between two top eight hopefuls in Jeff Fung and Magic Invitational Finalist Dan Clegg. Although a win was needed in order to take the coveted top eight spot home, neither player was guaranteed a spot with the win. Clegg was playing a powerful Black Blue deck that featured Sengir Vampire, Repentant Vampire and Balshan Collaborator as bombs. Looter and Think Tanks milled through his deck, and creatures like Dirty Wererat and Fright Crawler held the ground. Jeff was with a beating of a Red Green deck. Roar of the Wurm, Wild Mongrels, Mad Dogs, and more took to the offensive and made sure that the games would not last long. Add in Fiery Temper times two, Demoralize and a host of other removal spells, and you have a deck that is speedy and efficient.

Clegg won the die roll, and opted to play first. After a Clegg mulligan, the play started. Lands were dropped by both players, and a third turn attack from Wild Mongrel dropped a Roar of the Wurm into Fung's graveyard. On his fourth turn, Fung paid the flashback cost and had a huge monster ready for the offensive. Clegg answered with a Sengir Vampire, and passed turn ready to take a huge hit. Wurm swung for six, and Fung dropped Wild Mongrel and Mad Dog. Clegg backpedaled and stuttered for the entire game, but a Balshan Collaborator tag teamed with the Sengir to take down the huge Wurm token. Fung continued to cast creatures though, and with Clegg at two life, and in a staredown, he ripped Temporary Insanity off the top rope to take the flying collaborator and swing for the final two points of damage.

Dan Clegg opted to play first again, and things looked bleak for the former Grand Prix Champion after the third turn. Fung enchanted a mountain with Squirrel Nest and Dan answered with a Gravegouger. Fourth turn saw Fung play a Possessed Centaur, and Clegg miss his land drop. He hit the next though, but the Dirty Wererat he summoned fourth was put down with a Temper. Clegg mised a looter, but it had to block before it became active. After drawing and producing no blocker, the hand was extended and Jeff Fung walked away the winner.