Round 13: David Price vs. Willie Best 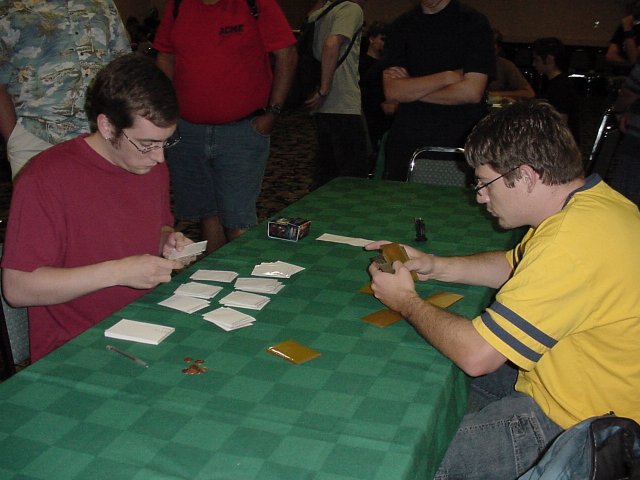 This is it, the final round to determine who will move on to the top 8. After an amazingly strong start on Day One, Price has faltered a bit, but is still in contention for the top 8. Best is fighting his way up, but has had a terrific day two and is in shooting distance of his first top 8 as well.

Price is running the popular G/U/r tempo beatdown deck, using a mix of small weenies and a splash of counter magic and burn to clear a path for the "goose", Blurred Mongoose or any others.

Best is the Montana state champion and is with the popular R/G deck that swept though Pro Tour Tokyo like a firestorm. Best may have a slight edge in this match up pre-board due to a more powerful creature base and more burn than Price. However, with cards like Mystic Snake, Repulse and Exclude, Price has a massive card advantage edge. This gets compounded post board by a mix of Jungle Barriers (which are insane against R/G since only Shivan Wurm can trade 1 for 1 against it) and Flametongue Kavus will really swing the match-up and Best's going to need some true tech to get past Price.

Best kicks things off with an unkicked Titan, which is matched and traded with Price's goose. He attempts to get a Raging Kavu down, but it is Repulsed then Mystic Snaked away. Major card advantage for Price, even in the early goings. Best's problems get compunded by a shortage of mana (he stalls at 3 for quite a while) and a kicked up Kavu Titan from Price pretty much spelled the end of game one.

As Dave prepared for the second game he showed me his sideboarding, taking out 4x Gaea's Skyfolk, 2x Prophetic Bolts, and an Exclude and Repulse, bringing in "the package" of 4x Flametongue Kavu and 4x Jungle Barriers. Both players shuffle each other up and it's time for the second game. 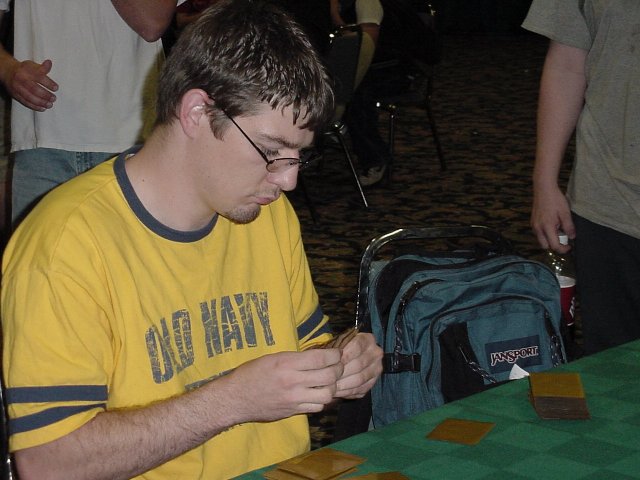 Best kicks off quickly again, this time with a Blurred Mongoose. Price is content to simply take a couple of hits from it and drops the bomb of Jungle Barrier on turn 4. Best does not look happy at this, and is even less so at the second that hits the table on the next turn. Best tries to muster some offense, throwing a Ghitu Fire at Price's dome, but Mystic Snake even turns THAT into card advantage for him. A kicked up Titan from Best meets the same fate on the next turn and Best is clearly frustrated. Price is still sitting on 7 card, has played a land every turn, and is just smashing everything Best tries to do. Price follows this up with an end step Prophetic Bolt (turning up a third jungle barrier that he passes over, choosing a Blurred Mongoose instead) a Kicked up Titan and Goose hit the board for Price, and on the next turn Price puts the final nail in the coffin of Best.

The second game was such a slaughter that if we'd done it in Texas, Price would have ended up hung twice over, but he was calm and understated, merely stating that the match-up was somewhat in his favor. Price looks to be a shoo-in for the top 8.