Round 13: Diego Ostrovich vs. Franck Canu 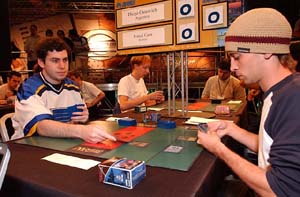 Franck Canu has enjoyed the comfort of the United States of America since Grand Prix - Philadelphia. He's working towards the next Masters Series, and with Houston bisecting the two events, it just made sense to stick around. You may have seen him hanging about with Christophe Haim, wearing matching caps. Canu is with the tournament's most-hyped deck: Aluren.

Opposite him is Latin sensation Diego Ostrovich. His success at World Championships earned him a place at the Magic Invitational, and along with World Champion Carlos Romao has come to represent the strength of the Latin pro community. This weekend he is playing an unorthodox choice: Mid-range green with mana acceleration.

Canu led with Eladamri's Vineyard. Ostrovich had no use for the mana but to enable an Elvish Lyrist. Canu didn't have the combo in hand, however, and just searched out Aluren with Intuition on his turn. Ostrovich found Naturalize and busted the Vineyard. He added Birds of Paradise and Gaea's Cradle, then passed it back.

Canu got his think on. Living Wish served up Cavern Harpy. Ostrovich made no play, content to wait on his ability to stop Canu's kill. Canu went for it. He played his Aluren, then a free Cloud of Faeries. He untapped two land and tried Cabal Therapy. The stack swelled.

Ostrovich hit Aluren with his Lyrist. Canu responded with Cavern Harpy. Ostrovich responded with Naturalize on Aluren. Canu tried Raven Familiar. It turned up nothing, and everything unravelled.

Canu chose Living Wish for his Therapy, but saw instead Masticore and Slate of Ancestry. He sacrificed his Cloud of Faeries to get rid of the 'Core. Ostrovich ripped Call of the Herd. Canu didn't have a lot of time left. It didn't help that Ostrovich found Rofellos to help his Slate.

Canu Intuitioned, this time for Brainstorms. He Stormed, then when he turned up nothing, Living Wished for City of Brass to start recursing his Raven Familiar via Cavern Harpy. Ostrovich rubbed his temples, facing a tough decision. He winced and actived his Slate of Ancestry, discarding Naturalize. Canu's expression showed that he thought it was a blunder.

Still, it gave Ostrovich the card-advantage hookup. Canu hung on by his nails, squeezing every last turn for all it was worth, but Ostrovich just made too many creatures, refuelling with the Slate, for him to survive. 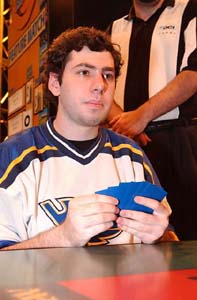 Canu led with City of Brass and Bird of Paradise. Ostrovich played forest, Bird. Canu dropped Wall of Blossoms, but then no second land. Ostrovich took full advantage, busting out two Calls while he was stuck and holding up Naturalize mana.

Canu had meantime found Brainstorm, which turned up Polluted Delta and then another Wall of Blossoms. Otrovich's offense was stymied. Canu took his time to set up. Intuition fetched Pernicious Deeds after Ostrovich made his third token. He hit for three, then forced out the Deed with Fecundity. Canu Intuitioned for Cavern Harpies.

He dropped Aluren, but didn't want to chance the kill. He played Raven Familiar. Ostrovich had no response. Canu passed it over. Ostrovich just played Deranged Hermit and left two forests open. It was finally Go Time.

Canu echoed the bird, then Brainstormed, played Cavern Harpy, and that was Ostrovich's time to strike with Naturalize. Canu was ready. He threw down Wirewood Savage and Cavern Harpy, killing Ostrovich in response.

There was just a minute left for Game 3. Ostrovich had a blistering start of Rofellos into double Call of the Herd against Canu's empty board. Time was called, but Canu received a warning for his slow play during the match, and the two were granted an extension.

He had a Deed to stop the Calls, but Ostrovich just flashed them back, in the meantime getting Monk Realist with Living Wish. Another Wish got him Masticore, and things were looking very bad for Canu. His pace turned glacial as he tried to find the solution within the extra turns.

Another Deed came to his rescue, clearing the second wave of Call tokens. He Intuitioned for Aluren, and suddenly it looked like he might be able to kill past Ostrovich's disruption. It was not to be. Ostrovich waited on his Monk Realist to force Canu to respond while holding only Wirewood Savage and Cavern Harpy. The Savage hit play, and with the Harpy on the stack, Ostrovich shot the savage down with Masticore. The match finally ended in a draw.