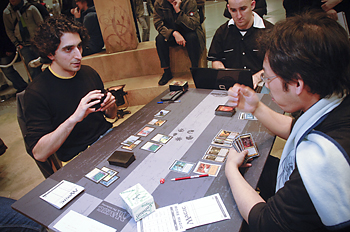 “Were you sad when no more Mystical Teachings in Type II?” Nassif asked. Yasooka nodded and laughed. Yet another similarity—both are somewhat dedicated control players and share a sensibility about drawing cards and countering spells.

As an aside, there was a slight chair shortage when competitors entered the Arena for this round. As chairs were shifted around, Marijn Lybaert arrived and exclaimed, “Finally, I can tell my girlfriend I love her!” You see, every time Bill Stark covers one of Lybaert’s matches, his friend pleads with him to include this simple romantic message—and every time, somehow, it just slips through.

I was forced to apologize to the scowling Belgian as I made clear Nassif and Yasooka were the two players being included in coverage this round. “Well, then, you have to put it into their report,” he insisted.

Nassif crushed Yasooka’s 3 on 2d6 with his 11 and elected to play first, both of them understanding how critical development of mana is to the matchup.

Nassif led off with a Vivid Creek to Yasooka’s Underground River. Both players continued to develop their position with lands, with Yasooka showing the first threatening play with a Mutavault on turn three. Nassif considered for a moment on his turn four, but then passed it back. Yasooka played another Mutavault and tried to end his turn, but Nassif stopped him and played Cryptic Command to bounce Yasooka’s Underground River. Yasooka replied with a Broken Ambitions for 1 to counter the counter.

Nassif untapped after this mini-counter battle and played Wall of Reverence. The life totals stood at 21-18 after Yasooka played his own four-drop, Glen Elendra Archmage, off of his previously protected Underground River. Nassif played a second Wall and passed. Yasooka played Terror to off one of the Walls, but the duplicate copy was gumming up the skies for the Archmage.

Another defender arrived for Nassif on Yasooka’s end step, a Plumeveil, but Yasooka was unwilling to let the life gain get that out of hand, and so Dismissed it with another Cryptic Command. Nassif used the opportunity to play a second Plumeveil, and this one stuck. Nassif went up to 27, and Yasooka down to 15, but Yasooka finally removed the remaining Wall of Reverence using two Agony Warps.

Yasooka made his move with an end step Mistbind Clique, finally demonstrating how divergent their strategies are despite so many similarities between players. Nassif floated all his mana. Yasooka activated his Mutavault, preparing to champion, but Nassif responded with Esper Charm drawing himself two cards. The champion trigger resolved, but when Nassif attempted to use Terror to take care of the Clique, Yasooka responded with Spellstutter Sprite.

Mistbind Clique bashed in past the Plumeveil, taking 4 once and then twice down to 19. Nassif continued, unfazed, drawing two more off of a second Esper Charm and continuing to play lands, going down to 15 and then 11 from Clique beats.

Nassif played his third and fourth Esper Charms in the meantime, but a Mulldrifter (for even more cards) met a Remove Soul from Yasooka. He continued to take the Mistbind Clique in the face, down to a precarious 7 life before he made his move: Broodmate Dragon.

I wish I could tell you that Dragons saved the day, but life in the Arena is no faerie tale. Yasooka’s Cryptic Command countering the “Double Dragon” and bouncing Nassif’s Plumeveil put the French player in a bad spot. When all of the Faeries attacked next turn, Nassif had Volcanic Fallout to take them all out except the relentless Clique, going down to 1 life, but still the Clique loomed, a bogeyman to control players everywhere. The top of his deck held no answers, and Nassif conceded. 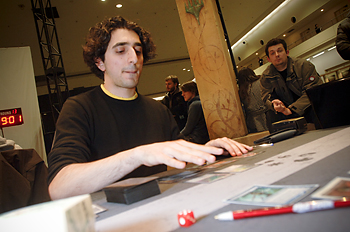 The man they call ‘Yellow Hat’ competes without his eponymous headgear.Both players kept, and the slow plod toward seas of mana (specifically, blue mana) began. Yasooka pulled away from the waves when he played an untapped Secluded Glen and then Thoughtseized Nassif. Nassif responded with Esper Charm and allowed the Seize to resolve. He revealed two Mulldrifters, Scepter of Fugue and plenty of land, and Yasooka selected the Scepter.

Unfortunately, the reason for Yasooka’s break from draw-go was that he became stuck on four lands, and had to discard at end of turn, pitching a Mistbind Clique and a Broken Ambitions while Nassif was content to draw cards with Esper Charms and lay lands. Nassif played a Plumeveil to forestall Faerie aggression, but when Yasooka only played an end-step Spellstutter Sprite. On his next turn, Nassif attempted Wydwen, the Biting Gale, an impressive sideboard inclusion against Faeries, but Yasooka had the Remove Soul and Nassif let it pass into the graveyard rather than pick a fight he suspected he couldn’t win.

One of Nassif’s Mulldrifters came down, but when Yasooka attempted Agony Warp, Nassif Negated it. A Thoughtseize from Yasooka revealed a hand full of gas, including two more Mulldrifters, Esper Charm, Terror, Wipmare and Exotic Orchard. Yasooka took a Mulldrifter, and then Mind Shattered for two, which caught Wispmare and Terror.

Yasooka finally tried a Puppeteer Clique, long since revealed to Secluded Glen, but Nassif’s Broken Ambitions, drawn off of another Mulldrifter and revealing another Esper Charm, convinced him to concede in the face of crushing card and mana advantage.

Yasooka led for this third game, and both players once again developed their capabilities in mana production. Yasooka revealed a Scion of Oona to a second copy of Secluded Glen, and then flashed it out against Nassif’s three Vivid lands. The Scion began to whittle away at Nassif’s life in one point hits, but once again, Yasooka lacked land and was forced to discard Agony Warp while stuck on three.

Still, the Scion continued to attack, until a Plumeveil arrived to chow down on the attacking Faerie lord. Yasooka attempted a Jace Beleren post combat, but Nassif’s Negate took care of the almighty planeswalker. Yasooka’s fourth land arrived, albeit a tad late. Nassif’s Esper Charm met an unusual response from the normally counter-happy Faerie deck: a Twincast. Yasooka drew two himself before Nassif drew two from the original and then drew two again from a second (physical) copy of the 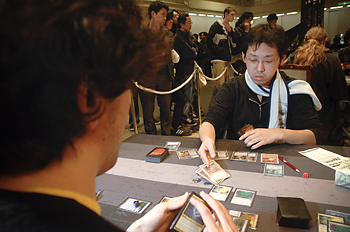 The man they call ‘Yellow Hat’ competes without his eponymous headgear.The additional cards from the copied Esper Charm allowed Yasooka to start making his land drops, and soon Yasooka was up to 7 lands to Nassif’s 11. With Yasooka still at seven cards, Nassif used a Cryptic Command to bounce one of his Secluded Glens and draw a card. Yet another Esper Charm continued to increase Nassif’s card count, and Yasooka got rid of a spare Sunken Ruins to his discard step.

Nassif tested the waters with a Mulldrifter, but Yasooka was ready with a Remove Soul. Nassif just allowed it and passed it back over to Yasooka. Nassif then went for the real threat: a Wydwen on Yasooka’s end step. Along with his fourth and final Esper Charm to keep himself armed and ready, Nassif started to go on the offensive, taking Yasooka’s life down in 3-point chunks.

Facing down the menace of Wydwen, Yasooka attempted another Jace Beleren. Nassif made a few cryptic statements that convinced Jace to take a hike. Wydwen continued the beats, taking Yasooka down to 6. Nassif put the screws in with a Scepter of Fugue, the dark counterpart to Jace’s card advantage in this matchup. When Yasooka tapped out in response with a Broken Ambitions for 6, Nassif paused and counted up his land. He decided to counter with an Ambitions for 1.

Yasooka’s next turn was a doozy. He played Glen Elendra Archmage and then Puppeteer Clique, but Nassif replied to the Clique on the stack with a Volcanic Fallout, and then with the Archmage persist trigger on the stack, Nassif showed a Cryptic Command for the Clique, reducing Yasooka’s army to a lowly 1/1.

That 1/1 became even more pitiful when a Pithing Needle contained its counterspelling ability. When Nassif showed a counter for Yasooka’s last card, a Mind Shatter for five, and Yasooka drew yet more land, Yasooka offered a handshake to Nassif.

“Ten lands,” said the soft-spoken Yasooka, gesturing at his board, and Nassif nodded his head in agreement.