Round 13: Eivind Nitter vs. Kamiel Cornelissen 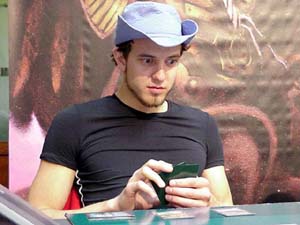 After twelve rounds of play, both Eivind Nitter and Kamiel Cornelissen were out of contention from the Top 8. However, at 7-4-1, they could still get a decent finish and earn some money, so they still had something to play for.

Nitter won the die roll and chose to play. Both players kept their opening hands, and Nitter got out the first creature of the match, a Wild Mongrel. Cornelissen answered by playing a Nightscape Familiar, taking two from the Mongrel. Nitter then summoned an Aquamoeba, while Cornelissen tapped out to play another Familiar.

The two creatures knocked Cornelissen down to 13 life, and Nitter passed on his own turn, leaving all four mana untapped. Cornelissen played a land, and thus he would be able to block both of Nitter's creature and regenerate them as well.

Nitter didn't see any reason not to attack, though, and he sent both in. Cornelissen chose not to block any of them. He had a Recoil though, and the Aquamoeba bounced back to Nitter's hand. Nitter discarded a forest. Then he replayed the Aquamoeba during his own turn.

Cornelissen cast a Fact or Fiction, flipping over a Recoil, a Force Spike, a Familiar, a swamp and a Psychatog. Nitter promptly put the Psychatog in a pile of its own. Cornelissen chose the other pile, while Nitter jotted down what he had taken. The Norwegian sent in his two creatures yet again, and Cornelissen was down to eight life.

During Nitter's end of turn step, Cornelissen Recoiled the Wild Mongrel. Then, the two Familiars did the first two damage to Nitter, before Cornelissen played yet another Familiar. The Norwegian played a second Aquamoeba, but it was Counterspelled. Three familiars knocked Nitter down to 15. Then Cornelissen played a Psychatog.

Facing potentially 19 damage, Nitter chose not to attack. Cornelissen tapped one blue mana and cast Fact or Fiction. "That's a cheap Fact," Nitter commented, and discarded an Arrogant Wurm in response so that he could use the madness cost. Cornelissen flipped over a Familiar, a Probe and three lands. Nitter put the Probe and an Underground River into one pile, and Cornelissen chose that one. He then Probed with kicker, filling up his graveyard even more, while emptying Nitter's hand at the same time.

When a Ghastly Demise put the Arrogant Wurm into the graveyard, Nitter scooped.

After drawing his seven cards, Nitter peeked at the cards on top of his deck, obviously choosing to mulligan. "Good choice," Sigurd Eskeland commented when he saw the cards Nitter flipped over, while Nitter was quite dissatisfied by getting yet another weak draw. He kept his second hand, and played a turn one Basking Rootwalla that started attacking.

Nitter attacked with his two creatures, taking Cornelissen down to 13. Then he tapped four mana to play a Deep Analysis. The Dutchman played another Nightscape Familiar, and a Deep Analysis, filling up his hand.

During his turn, Nitter chose to flashback the Deep Analysis. Then he sent his two creatures in, knocking Cornelissen down to eight life. The Dutchman needed a way to deal with the Blightcutter, and he flashbacked his Deep Analysis, going down to five. He found an answer—a Glacial Wall.

The wall stopped the Blightcutter, but Nitter got a Wild Mongrel into play. He counted the cards in his hand. "The old one has a dog on it," he remarked, pointing to the Wall on the other side of the table, "it is a Wild Mongrel trying to climb up the Glacial Wall." Both players chuckled.

When Cornelissen cast a Deep Analysis, Nitter responded by discarding an Arrogant Wurm, paying the madness cost to get it into play. Cornelissen didn't like the wurm, so he Counterspelled it. Nitter figured he had to keep up the pressure, though, and so he attacked with his two creatures. Cornelissen blocked both, and chose to let his Familiar die instead of tapping out. Nitter then cast Careful Study, discarding an Arrogant Wurm and played the madness cost. Cornelissen still didn't seem to like wurms. He attempted to counter it with a Circular Logic, but Nitter had one of his own, and the Wurm came into play.

Having one creature too little to block all of Nitter's attackers, Cornelissen sacrificed his Cephalid Coliseum to draw some cards. He then Ghastly Demised the Wurm to even out the stats, and played another Nightscape Familiar. The Norwegian had to go look for ways to get through the defence, and he flashbacked a Deep Analysis to dig deeper into his library. He also played another Careful Study, and then he sent his two other creatures over to force Cornelissen to spend mana by blocking and regenerating.

Out came the Psychatog. "Yeah," Nitter replied, looking displeased. Cornelissen played a Fact or Fiction as well, flipping over a Gainsay, three lands and a Psychatog. Nitter placed the three lands into one pile, and Cornelissen chose the two spells. The Dutchman then played the second Psychatog, and with plenty of cards in his graveyard, the two Psychatogs could easily finish Nitter off.

Nitter had a trick though—he Æther Bursted the Glacial Wall, and as he had threshold, the Blightcutter was able to deal the last three damage to win him the game. 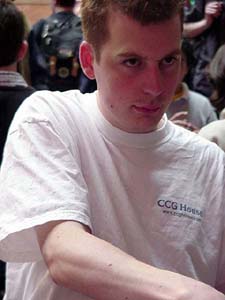 Cornelissen chose to play first in the third game, and he kept his opening hand. Nitter kept as well, and he played a turn one Careful Study, discarding a Basking Rootwalla that came into play thanks to the madness, and a forest. Cornelissen played one of his Nightscape Familiars. During his following turn, he played Fact or Fiction, flipping island, island, two Ghastly Demise and an Engineered Plague. Nitter seemed to gamble on Cornelissen being short on land, and he chose to put the two lands in a separate pile. The choice could be questioned as the Dutchman had a Familiar in play, and Cornelissen chose the pile with the three spells, indicating that he had enough lands.

Again, Nitter got out a Nantuko Blightcutter. Cornelissen answered by getting out a Psychatog, but it didn't prevent Nitter from attacking with his two creatures. Cornelissen chose to block the Rootwalla with his Psychatog, and when Nitter pumped it, the Dutchman Ghastly Demised it. Then, Nitter summoned an Aquamoeba.

The Aquamoeba was Ghastly Demised as well, and Nitter went down to 17 after taking a hit from the Familiar and the Atog. Suddenly, the Norwegian needed answers, and he dug into his library using a Deep Analysis.

The situation looked even worse for Nitter when Cornelissen bounced his Blightcutter using a Repulse. Nitter didn't recast it immediately. Instead, he played a Wild Mongrel. Cornelissen Counterspelled it, but Nitter used a Circular Logic to force it onto the table—only to get it back in his hand again thanks to a Repulse. The Dutchman then played a Fact or Fiction, flipping over two islands, a Recoil, an Upheaval and a Circular Logic. Nitter placed the two islands and the Logic in one pile. Kamiel chose to take it. He then sacrificed his Coliseum to draw enough cards to finish Nitter off with his Psychatog.